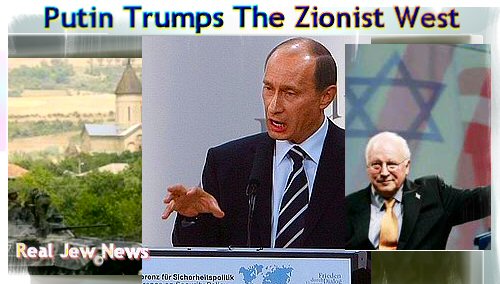 For The Best Coverage Of The Georgian Conflict Click: Rense.com Here
“A STAR SHALL RISE IN THE EAST” wrote the Russian author & visionary Fyodor Dostoyevsky in his book, Brothers Karamazov. What Dostoyevsky had in mind was the re-emergence of the Russian Orthodox Church as a “light to the world.”

Truly, the darkness of the Zionist-occupied West and its New World Order has descended upon the geopolitical scene ever since the founding of the rogue nation known as the State of Israel in 1948.

Revealing a light that is now dispelling the darkness of the Zionist-Jewish West, The Guardian’s European editor, Ian Traynor, points out in his article, Six Days That Broke One Country & Reshaped The World Order, that Vladimir Putin and his coup in Georgia has “tilted the global balance of power against the West in favour of the rising star of the East.”

To an audience that included John McCain and Robert Gates, Putin served notice to the West of his geopolitical vision in his February 2007 Munich speech:

— “What is a unipolar world? It refers to one centre of authority, one centre of force, one centre of decision-making. It is a world in which there is one master, one sovereign. This is pernicious … unacceptable … impossible” — Here.

On August 13, 2008, French President Nicholas Sarkozy, in his diplomatic efforts in Moscow, tacitly acknowledged that America’s “one centre of decision-making” was indeed “impossible” for the European community. Assuring Moscow that it was “normal for Russia to want to defend Russian-speaking people outside Russia’s borders,” Sarkozy let Moscow know that the European Community had its own interests at stake:

— “The EU has to be ready to defuse the situation in Georgia. But it cannot forget its own interests in the process” — Here. 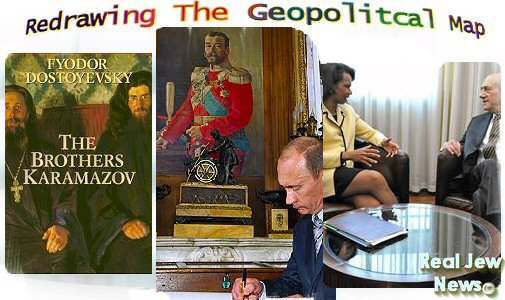 AMERICAN STOCKPILES OF WEAPONS were discovered by Russian troops in Senaki Georgia on August 15 2008 as Russian convoys drove closer to the capital city of Tbilisi. While the Russians celebrated their seizure of US weaponry in Georgia, it was becoming clear to the West that within only 6 days Putin had redrawn the geopolitical map.

With his rout in Georgia, Vladimir Putin had given a lesson to the countries in the zone between West & East — Georgia, Ukraine, Belarus, Kazakhstan — that to seek protection from a Zionist-occupied West that only spouts off empty promises (and empty threats) is not smart foreign policy.

And this Russian “lesson” has been brought home to Georgia which now faces a “Pro Russian” government to be installed by Putin in Tbilisi. Putin gave notice of his intentions to depose Saakashvili when on August 11 2008 he contrasted the West’s treatment of Sadaam Hussein with its treatment of Saakashvili. “The Americans had hanged Saddam,” said Putin. “But now America protects Saakashvili who burned S.Ossetian civilians alive while seeking protection in their sheds,” Putin remarked Here.

Moreover, on August 13 2008, Putin authorized the Russian Federation Prosecutor Office to put Saakashvili on trial for crimes committed against civilians in S.Ossetia.

In a speech to a Russian Orthodox monastery in northern Russia in 2001, shortly after his ascendancy to the presidency of Russia, Putin said that “without Christianity, without the Orthodox faith and culture which sprang from it, Russia would have hardly existed as a state.” But the Zionist Jews who control the West are hell-bent on destroying Russia’s Orthodox faith and the Orthodox Christian state that Putin promotes.