VLADIMIR PUTIN IS THE TARGET of heated rhetoric from Obama & his foreign policy adviser, Zbigniew Brzezinski.

Both are already stoking the fires of a US-Russian conflict. In an interview with Huffington Post, Brzezinski, Obama’s script writer, had some “fighting words” for his hated foe, Vladimir Putin.

When asked at the outset of the interview to comment on Putin’s “invasion” of Georgia, Brzezinski started off by comparing Putin to Hitler:

“Putin is putting Russia on a course that is similar to Hitler’s in the late 1930s. An analogy may be drawn between Putin’s justification for dismembering Georgia — because of the Russians in S.Ossetia — to Hitler’s tactics vis a vis Czechoslovakia to “free” the Sudeten Deutsch. Ultimately, what is at stake is the role Russia will play in the new international system.”

“The question is how to respond to Putin’s larger imperial designs: to cut Western access to the Caspian Sea and Central Asia by gaining control over the Baku/ Ceyhan pipeline that runs through Georgia. At stake is access to oil as that resource grows ever more scarce.”

Then the gloves came off. It’s obvious that Brzezinski wants war with Russia when asked if the US should give Georgia military help against Russia:

“The invasion of Georgia by Russia is a sad commentary on eight years of self-delusion in the White House regarding Putin and his regime. The question now is about our longer term interests. If Putin embarks on a blatantly nationalistic and imperialistic course, we will all suffer. Therefore it is all the more important that Russia be stopped now.

And finally, Brzezinski wants a NATO presence in Georgia, regardless of Putin’s objections: 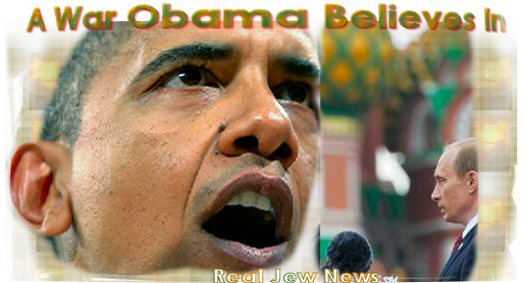 BARACK OBAMA IS ‘BARKING’ militant against Vladimir Putin, calling him a “bellicose autocrat.” A whole host of Obama’s diatribes against Putin for his “autocratic” ways have recently appeared on Obama’s Web Site.

Although all of Europe knows that Putin was acting in self-defense with regard to Georgia’s invasion of S.Ossetia, Americans are being lied to about Putin and the Georgian conflict by Zionist Jews who own & occupy America’s mainstream media.

Here’s a sampling of Obama’s barking against Putin, obviously scripted by Brzezinski:

“Russia’s invasion of Georgia has created a serious security challenge for the US. In contrast to the Bush Administration’s erratic policy of embracing Vladimir Putin, I will pursue a strategy that addresses the challenge posed by an increasingly autocratic and bellicose Russia.

I will address the new challenges Russia poses by pursuing a vigorous strategy that will include supporting democratic partners throughout Eurasia.” View Entire Story Here.

Obama has recently published a frightening treatise, entitled, “A 21st Century Military For America.” Obama wants to beef up an “active US army” - not only for an “international crisis” - but for an “unexpected crisis at home.” Obama is calling for a “single combat brigade” to “protect” America from such a crisis.

– It’s Obama, Not Putin –
Who Is The True “Hitler” Of Brzezinski’s “New International System”…
– Voters Beware! –