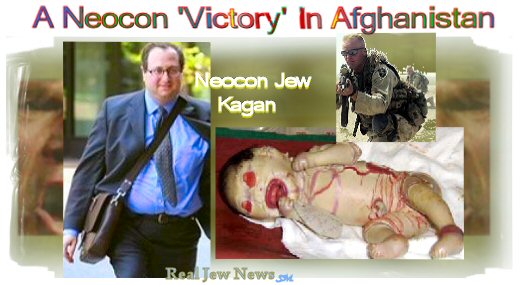 See Photos Of US War Crimes In Afghanistan @ Rense.com Here

With neocon Jew Fred Kagan at the head of the AEI as “resident scholar”, the neocons recommended that another surge of US forces is required, this time in Afghanistan.

After meeting in late January of 2008, Kagan said that the “core group working on the proposal were experts on Afghanistan instead of Iraq.” Referring to the group as the Afghanistan Planning Group, Kagan said, “it’s clear that more troops are necessary in Afghanistan.” 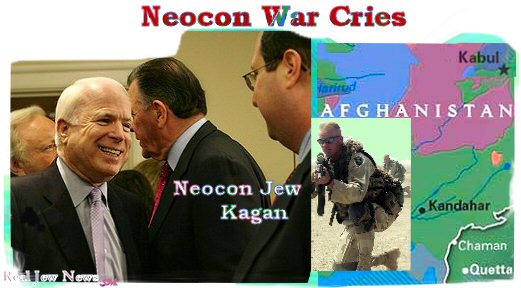 A ZIONIST WAR CRY FOR AFGHANISTAN

“From the moment the Bush administration took office, I argued against its preference for high-tech, small-footprint wars.

But now the most surprising phenomenon of the war has been the transformation of the US military into the most effective counterinsurgency force the world has ever seen” Here.

A “transformation” of the US military? Kagan is referring to the 30,000 additional US troops sent to Iraq by Bush in 2007. This “surge” of US troops in Iraq by Bush closely tracked recommendations made in Kagan’s paper, “Choosing Victory – a Plan for Success in Iraq.”

VICTORY IN AFGHANISTAN AT ANY COST

“Deploy an extra US brigade into Kandahar and a Marine battalion into Helmand in 2008 and maintain that force level through 2009.”

“Provide NATO forces in southern Afghanistan, where the Taliban are strongest, with the necessary enablers’ such as engineers, aviation, surveillance, and command & control assets.”

This is Fred Kagan’s billion dollar program calling for more American soldiers
to sacrifice their lives for ‘victory in Afghanistan.’
But Will Fred Kagan Send His Own Jewish Children
To Sacrifice Their Lives For His Zionist War In Afghanistan?

I Doubt It My Dear Christian Friends…


And: “Bush: ‘Lies My Neocon Friends Told Me’” Click Here