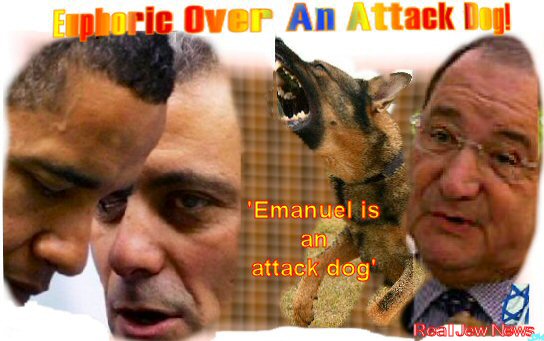 “RAHM EMANUEL HAS YIDDISHKEIT” is one of the cheers coming from Jewish leaders with regard to Emanuel being named Chief of Staff by Obama.

“Emanuel is a killer in a fight, an attack dog, a committed Jew, he comes from good Irgun stock,” continue the cheers & praises of Jewish leaders.

“Emanuel can be a ‘mamzer,’ but he’s our mamzer,” said Steve Rabinowitz, a Washington political consultant, using the Yiddish term for “bastard” in affectionately describing Emanuel. “Sometimes being a mamzer is what you need,” concluded Rabinowitz.

And being a “mamzer” is what Emanuel does best. Sending a dead fish to a Democratic pollster who turned disloyal illustrates Emanuel’s bastardly conduct. (Read About Emanuel’s ‘Dead Fish’ Incident Here, Here, & Here.)

As for Emanuel having “Yiddishkeit,” a closer look at this Yiddish term will reveal much about Emanuel’s upcoming Jewish influence in the White House. The term “yiddishkeit” is used by Jews to extol the prize of possessing a Jewish consciousness. Having a “Jewish consciousness” fills a Jew with a feeling of superiority over the “goyim.”

Here’s an example of a Jew’s sense of superiority over the Gentiles. I grew up as a Jew and a criticism of a Jew who does something “stupid” is to say that he has a “goyisha kup.” This means that he has a “Gentile brain.” Thus for Emanuel to have “Yiddishkeit” means that he will never “think like a Gentile.” 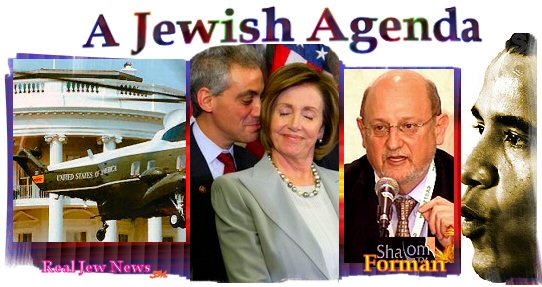 THE JEWISH AGENDA literally obsesses the minds of most American Jewish leaders. That obsession is clearly reflected in the near ecstatic prose being strewn across the political landscape by American Jews.

For example, the director of the Jewish United Fund Of Chicago, Michael Kotzin, has this to say about Obama’s naming of Rahm Emanuel’s dominant position of White House power in the coming administration:

“Rahm Emanuel has a thorough grasp of issues on our agenda. He is responsive to the needs of the Jewish community. Emanuel often attends Israel-related events and speaks to the crowds about his support for Israel. View Entire Story Here & Here.

The “Jewish agenda” was again voiced by one Ira Forman, Executive Director of the National Jewish Democratic Council (NJDC). Forman released the following statement about Emanuel’s appointment as Chief of Staff:

“Emanuel has deep Jewish roots and strong ties to the Jewish community. Emanuel has a proven commitment to Israel’s security and served on an Israeli military base during the Gulf War of 1991. We look forward to continuing to work with Emanuel in his new role in the Obama administration.” View Entire Story Here.

Abraham Foxman, arguably one of the most rabid Zionist Jews of all and Director of the Anti Defamation League (ADL), chimed in, enlarging the “Jewish agenda” to a Zionist zenith:

“The significance of Emanuel’s Jewishness is more how unremarkable it is that an unapologetic Jew should rise so far in the political arena. Emanuel has never hesitated to wear his Jewishness proudly on his sleeves.” View Entire Story Here.

DO WE NOW SEE what the “Jewish agenda” is about? “The needs of the Jewish community,” “a commitment to Israel,” “wearing Jewishness proudly.” This is what Jewish leaders praise Emanuel for.

But where do we find a Jewish leader praising Emanuel for seeking the needs of the AMERICAN community? For having a commitment to AMERICA? For wearing his AMERICANISM proudly?

Alas, our nation has been deeply penetrated and is firmly in the hands of a single-minded, some say ruthless, special interest group, the Zionist Jews. These men and women…many dual citizens of Israel…have little if any interest in America beyond how it can benefit - and be used for - Israeli-Zionist-Jewish interests.