Sources: The International Origins Of The Federal Reserve System, J. Lawrence Broz;
The Rothschilds, Frederic Morton
JEWS CONTROL AMERICA. This is because the Jews own the Federal Reserve Bank. It’s not “federal” at all. It’s privately owned. by Jews!

The money that President George Bush borrows in the billions of $$$ at interest comes from the Jewish money lenders of the Federal Reserve Bank. They look so very professional & so legit don’t they? But don’t fall for it for they are bandits.

For how does President George Bush pay for these loans at Jewish high interest hmm? By taxing American Gentiles up the gazoo!

1) Ben S. Bernanke: Chairman of the Board of Governors of Federal Reserve. Term ends 2020.

2) Donald L. Kohn: Vice Chairman of the Board of Governors of Federal Reserve. Term ends 2016.

3) Randall S. Kroszner: Member of Board of Governors of Federal Reserve.

4) Frederic S. Mishkin: Member of Board of Governors of Federal Reserve. Term ends 2014.

5) Alan Greenspan: Advisor to Board of Governors of Federal Reserve. Recent Chairman. 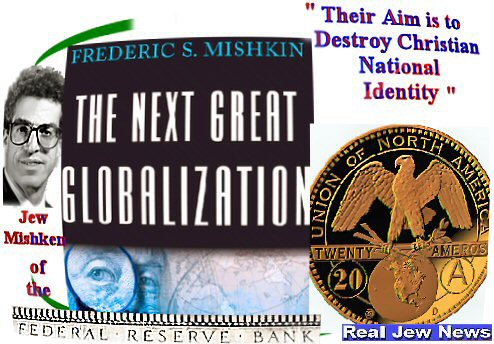 ‘E PLURIBUS UNUM’ AND THE JEWS OF THE FEDERAL RESERVE BANK

‘ONE OUT OF MANY’ is what the Federal Reserve Jew Frederic Mishkin’s recently published book, The Next Great Globalization, is all about.

The book’s theme is how poor countries like Mexico can share in the wealth of America and the European Union. Mishkin’s aim is the undermining of national pride, identity, and the blurring of national distinctions by nations having a shared monetary system and shared global values.

The Jew Mishkin is out to destroy all national ideologies, foremostly Christianity, which would oppose his vision of a world whose finances are controlled by Jews. In Mishkin’s purview is the planned North American Union patterned after the European Union which the Rothschilds control.

CENTRAL-BANKING JEWS AND THE ROCKEFELLERS

ROTHSCHILD OIL INTERESTS centered in the Caucasus had as its only competitor, John D. Rockefeller’s Standard Oil in the late 1800s. In 1892, a Jew, (like his contractors), Samuel Marcus, established the Shell Oil Company as the marketing arm for the Rothschild’s Baku Oil so as to compete with Standard Oil for oil rights in the Suez Canal.

THE JEWISH BANKS THAT OWN THE FEDERAL RESERVE SYSTEM


HOW CAN WE ELIMINATE THE JEWISH-OWNED FEDERAL RESERVE BANK?
The answer is simple but will involve much sacrifice:

1. Western Civilization must become “Christian” again. Each of us must commit our lives to Jesus Christ as Lord.
2. Vote for the Christian candidate Ron Paul who wants to dismantle the Federal Reserve.
3. Tell all your friends that the Jews are robbing America and that they must be stopped!