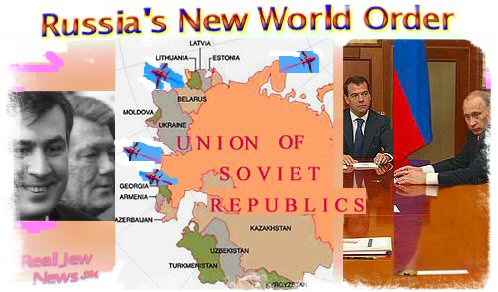 Sources: Further Russian Military Action Is Possible Here;
US To Punish Russia? @ Rense.com Here
“WHAT DO YOU THINK is the future of the world order and Russia’s place in it?” was asked of Russia’s President, Dimitry Medvedev, in an interview with him on September 1, 2008.

Medvedev replied, “I will implement Russia’s foreign policy on the basis of five points.”

Medvedev’s 5th point tells it all:

“Russia has regions where it has privileged interests. These regions include states with which our country has had historical ties. These priority regions are of course the border states—but not only these.

The future doesn’t just depend on us. It also depends on our partners in the international community. They have a choice. They can work within the parameters of international law or they can disregard them.” Here.

And a “choice” was made by the EU in Brussels on September 1 2008 regarding their relationship with Russia in the aftermath of the Georgian invasion of S.Ossetia. The EU, fearing a very cold winter without Russian heating fuel, decided not to impose sanctions on Russia. This choice was the beginning of a great divide between Europe and America.

It is also clear that Moscow is claiming as its rightful sphere of influence the former Soviet Republics that became independent in 1991 and which have sizable blocs of Russian passport-holders. The defense of the S.Ossetians and their “security ring” in Georgian territory is Russia’s first move to enforce this sphere and to keep the West and NATO out. 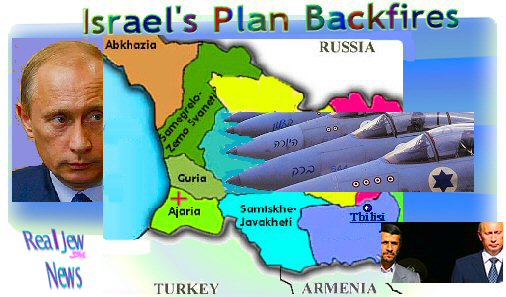 RUSSIAN FOREIGN MINISTER Sergei Lavrov called for an arms embargo on Georgia “until the Saakashvili regime falls.” Lavrov added a warning to the US:

“If instead of choosing the interests of the Georgian people, the US and its allies choose the Saakashvili regime, this will be a mistake of truly historic proportions” — Here

Moscow is ready to begin to enforce such an embargo by invoking “additional security measures” as part of Putin’s response to Israel’s plan to base Israeli fighter-bombers just south of Tbilisi intended for a special air raid with planes loaded with anthrax on Tehran.

Part of the “additional security measures ” could result in Russian warships moved to Batumi, the capital of the autonomous Ajara Republic. By invading Ajara, Russia would prompt the local separatist movement to break up Georgia even further. Aslan Abashidze, the separatist leader who ruled Ajara from 1992 to 2004, is at present in exile in Moscow.

Then, by Russia taking over Tbilisi International Airport, and creating chaos in the capital, Moscow may hope finally to topple the “Saakashvili regime” and at the same time embarrass the hated US State Department.

WHILE CHENEY & RICE hurl a combination of blandishments & bluster towards Moscow, Russia continues to play out its role on the world stage.

With America’s perception of itself as the world’s policeman, Russia can only be looked upon by Washington as acting to the detriment of what it perceives as its interests. For the entire planet has become for the US, its own region of privileged interests.

America’s pretensions throughout Eurasia have been gradually challenged by Russia. Not a few countries are now looking away from Washington and towards Moscow. On September 3 2008, Azerbaijan rejected Cheney’s request for support in building a pipeline to bypass Russia.

The United States’ “unipolar moment” in history has passed. A New World Order initiated by Russia is now in the makings. Russia has recently begun showing its teeth throughout the globe by sending a naval contingent to Syria carrying nuclear submarines & bringing long-range bombers to Venezuela for “training exercises.”