HERE IS WHERE WE LEFT OFF FROM PART III:

Given the crisis which is currently present in your relations with the US and the EU, what contribution can you support to cool off this crisis?

Vladimir Putin: First of all, it appears that to a great extent this crisis was provoked by our American friends in order to enhance their election campaign. This is the use of administrative resources in its most deplorable form — in order to ensure the advantage of one candidate. In this case, the advantage of the current ruling party.

Roth: But this is not a fact.

Putin: Perhaps. However, we know that there were many American military advisors in Georgia. This is very bad to arm one side in order to solve the ethnic problems in a military way. At first glance, it is much easier than to lead long term negotiations and to search for compromises. But at the same time, it is a very dangerous way, a way that the US so often chooses, and the order of events has proved this.

American instructors - all of the personnel teaching on using military techniques — where should have they been engaged? At training grounds and training centers. But where were they? In combat areas!

This suggests that the US administration was fully aware of the preparing military action - and moreover, probably participated in this military action. Because without the order of the senior management, American citizens had no right to be present in the conflict area.

Only the local residents, observers of the OSCE, and the Russian peacekeepers were allowed to stay in the security zone. We have, however, found evidence of US citizens in the security zone that belong neither to the first, second, or third category. Why were they there? That is the question! If they will not tell us, and did allow this, then I suspect that it has been done on purpose — to organize a small victorious war.

And should it fail in their planning? Then they compose an enemy image out of Russia, and on this basis, mobilize the voters around one of the presidential candidates. Of course, the candidate they are promoting is of the present ruling party - because only the ruling party has such resources.

Roth: The last question I would like to ask you is a question that I am very interested in myself.

Don’t you think that you personally are in the trap of your authoritarian state? In the existing system, you receive information from your secret services and from other sources which include the highest economic environment — even the mass media in Russia. These, no doubt, are all afraid of telling you anything different from what you are willing to hear.

Is it not then the case that your existing authoritarian system obstructs a broad view for you to see the processes that happen today in Europe, the US, and in other countries?

Putin: Dear Mr Roth, you have characterized our political system as ‘authoritative’ and therefore a political system to be censured. But please, in this context, let us consider the conflict which we are presently discussing.

Don’t you know what has been happening in Georgia in recent years? The mysterious death of Saakashvili’s opponent, Zurab Zhvania, the prime minister? The reprisals against the opposition? The violent dispersion of the opposition demonstration in November last year? The rigging of national elections practically in the conditions of a state of emergency? Then this criminal action in S.Ossetia resulting in many civilian deaths.

And yet for all of this, does the West still tout Georgia as a ‘democratic country’ with which a dialogue must be held and which is to be taken into NATO and perhaps in the EU? The regime in Georgia is a far cry from what the West wants the world to believe.

Yet if another country protects its interests, simply its citizens’ right to life — who have been attacked — 80 of our people were immediately killed by the Georgian attack, 2000 civilians are dead in the end — and what, we are accused of being ‘authoritarian?’

And if we protect the lives of our citizens, we will have Kolbasa [Russian sausage since Russia relies on European food imports] taken away from us? Do we have a choice between Kolbasa and life? We choose life, Mr Roth. 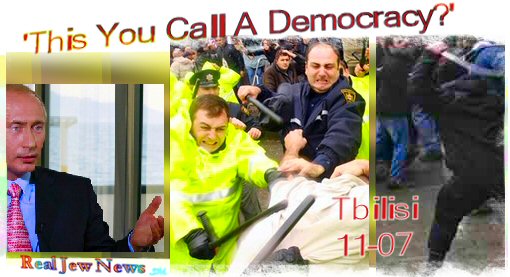 Roth: But in your own country..

Putin: Please - let me to talk about freedom of the press since you brought it up. How have these events been represented in the US media, one of the so-called beacons of democracy?

I was in Beijing when all these events happened. There began the massive bombardment of Tskinvhalli, there were already ground operations of the Georgian troops, many victims, and no one had reported anything about these incidents!

Hardly had we pushed back the aggressor, knocked his teeth out, he hardly had his American weapons dropped in haste and fled - all at once the Western press remembered all about international law & called Russia, the aggressor. All began to wail! Why this selectivity?

Roth: Does not Russia need to care for its own economic interests rather than alienate its European partners?

Putin: Alright, let’s talk about ’sausage’ -the economy. We want normal relations with our European partners. We are a very reliable partner. We have always fulfilled our obligations.

When we built a pipeline system in Germany in the early 60’s, our partners across the Atlantic advised the Germans not to approve this project. You should be aware of this. But then, the leadership of Germany made the right decision and this system was built together. Nowadays, this is one of the reliable sources of energy supply for the German economy.

Let us look at the global economic situation. What are our exports to Europe and also the US? More than 80% of the resources — oil, gas, timber, metals, and fertilizers. That is all that the world economy and also European industry demand. These are all things that can very well be sold on the world markets should there be sanctions against us.

Concerning your imports to us, Russia is a large and reliable market. Does someone want to stop selling to us any longer? Well, then, we will buy these products elsewhere. Who profits from it? Not our partners in Europe. Those across the Atlantic?

We are a victim of aggression and the West’s distorted propaganda. We want an objective analysis of the situation which we are not getting. We only hope that common sense and justice will prevail.