Jewification Of America Articles, Why Jews Don't Move To Zion 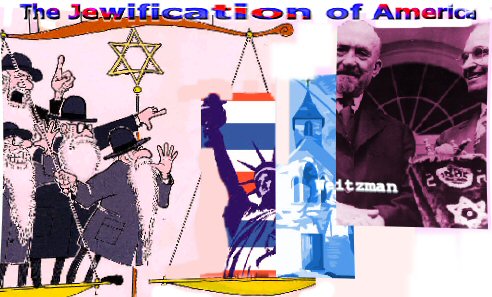 THE JEWIFICATION OF AMERICA
By Brother Nathanael Kapner, Copyright 2007-2011

Or Send Your Contribution To:
Brother Nathanael Kapner; PO Box 547; Priest River ID 83856
E-mail: bronathanael@yahoo.com
THE JEWISH QUESTION has been debated ever since England’s “Jew Bill of 1753,” which dealt with the ability of Jews to integrate within Western Europe.


Since that time, Karl Marx, Theodore Herzl, and even John Paul Sartre, have written on the “Jewish Question,” expanding the question into political, religious, and even, “poetic” realms.

But on a grass roots level, both past and present, the “Jewish Question” as discussed in taverns, coffee houses, and restaraunts, is about the perception of Jews existing as a peripheral and disloyal group that is internally cohesive and conspiratory.

I would like to tell you what I mean by the term, “Jewification.” Since the Jews have no culture or ideology of their own, being a people of the Diaspora, and most of them being “secular Jews,” the term “jewification” has to do rather with the “agenda” of the Jews. And an agenda they have indeed!

To “jewify” a nation’s culture, (for a nation’s culture does not exist in a vacuum but always has an ideology attached to and informing it), is to have imposed on that culture a Jewish way of looking at things.

Do we not see this Jewish way of looking at things through the Mass Media funneling down to us into the general culture? How many times have you heard the expression, “Oy Vey!” as if this is a pleasant expression and contributes to the life of our society? Or how many times did a fellow worker come up to you and ask, “Would you like to hear a good Jewish joke?”

And it’s all so lighthearted and so enriching is it not! And then we turn on Seinfield at night and the skinny Jew boy makes us laugh and feel so good about being allowed entry into the jewish way of looking at things.

Have you seen the cover of this week’s Newsweek? The hideous looking Jewish face of Alan Greenspan who is laughing all the way to his and his Rothschild friends’ privately owned Federal Reserve Bank which is charging interest on loans of printed money to us Americans up the gazoo, is leering at us from this red fluorescent cover of the Jewish-owned Newsweek.

It almost prompts an American, or better yet, a Christian, to fling his arms up in the air, and then with the right hand making a projected fist, to say, “Enough is enough already of these Jews!”

The jewification of America began almost as soon as the Jews got off the boat in America in the late 1800s. Yes, the Jews came over because good ‘ol Christian America opened its arms to the persecuted and “innocent” Jews fleeing the pogroms of Russia! “Oh we are so persecuted everywhere we go!” say the Jews.

But did any of us ever ask just why the Jews are “so persecuted everywhere they go?” Is it perhaps that the host nations in which they were once welcomed also had plenty of reasons to proclaim, “Enough is enough already of these Jews?””

In Henry Ford’s, The International Jew, written in the 1920’s, he outlines the beginnings of the Anti Christian Jews’ attempts to jewify America by first eradicating Christianity from public life.

Ford writes, “The Jews determination to wipe out of public life every sign of the predominant Christian character of the United States, is the only active form of religious intolerance in our nation today.”

And so they began their systematic process of wiping out Christianity from our nation’s culture by intimidating and bribing judges to rule that praying and reading the Bible in our schools, (made up of mostly Christian folk), is “Unconstitutional.”
[ For a list of the Jews’ actions begiinng in the early 1900s to which Henry Ford was referring, See: http://www.realjewnews.com/?p=24 ]

Next came the Jews’ role in bringing America into World War I. Why did Woodrow Wilson, whose friend was the Zionist and his own Supreme Court appointment, Louis Brandeis, suddenly come out in favour of the War in 1916? It was because the Zionist Jews supported by the Rothschilds, sent Chaim Weizman to the Great Britian to strike a deal with Prime Minister Lloyd George.

The deal, as recounted by the former Zionist Benjamin Friedman turned Roman Catholic, was the following: Germany had won the war by 1914. Then Germany invited France and Britain to the peace table and said, “Okay, we’ve won, but there will be no losers. Let’s just go back to how things were before.

Germany did this because before the War broke out they had made arrangements with the Ottomans to develop oil fields for them because of their advanced technology.” (Are you getting to see the picture here?)

So what happens next, the Rothschilds send their pawn, Chaim Weitzman, to Llyoyd George and the British parliament with these words, “You don’t have to lose the war. We will bring America into the War through our contacts with Woodrow Wilson. But you’ve got to promise to give us Palestine.” (They did not mention anything about their designs on the oil fields of the Ottomon Empire or did they?). Anyways, from that conversation, the Balfour Declaration of 1917 appeared.

Now here’s what happened in America. Woodrow Wilson had a lot of Jews advising him. Wilson was enamored of the Jews, especially when they “helped him out” now and again. More “help” was on its way. The Jews got wind that Woodrow had an illicit affair with a fellow Professor’s wife while teaching at Yale.

So they send one of their investment bank boys to him with these words, “Your former mistress is having qualms of conscience about the whole unseemly affair. She would like $40,000 to stop her conscience from bothering her.”

After Woodrow gulps and the color of his face changes to a deep reddish hue, the Jew chimes in, “We have arranged to loan you the $40,000 as a contribution to your election campaign.” And no sooner does the Jew make that promise or rather, “blackmail” poor Woodrow, that all of a sudden, good ‘ol Woodrow wants America to enter the War!

First of all, the Jewish way of looking at things, begins with their own unspoken approach to life, which is, their obsession with self-preservation. The Jew is a materialist with no aspirations for a life after death. All of their hopes and dreams are invested in the here-and-now. This, coupled with a half conscious guilt for their crimes and misdemeneors against the offended Goyim, give rise to their obsession for self-preservation.

The Jews want nothing more than a weakened, impotent culture to exist in. This works to their benefit so that they can take over a society of jaded, passive, and unprincipaled citizens. Will homosexuality and lesbianism weaken that culture? You better believe it, since the family unit, (which the Jew lives and dies for), is the central component of a strong nation and healthy culture. That’s why you have Jews promoting deviant sexual activity in their synagogues by their token Gay rabbis; in their Newsweeks; in their TV shows; in their New York Times; and in their Hollywood.

Will multi-culturism weaken a nation’s culture? You better believe it. For multi-culturism served up, “Jewish Style,” means, multi-religionism. “Diversity Is Our Strength!” reads the slogan penned by the Jewish Madison Avenue boys. But this slogan flys in the face of the saying of one of their own who exhorted, “United we stand, divided we fall.” We all know that a unified idea confers strength, but a plethora of ideas only creates confusion and impotence.

Thus we have seen the Jews favouring, promoting, pushing, writing, “lobbying” for all of the Open Immigration bills, beginning with the Immigration Law of 1965 which opened the flood gates of all kinds of multi-cultural peoples with their multi-religious views.

Need I go on and on? We all know that America’s foreign policy is based on the Zionist Dream that every Jew should have a place to escape to — I mean, to live in perfect Jewish freedom. But there ain’t too many of dem Jews here in America who want to live that Zionist Dream – but rather to have our tax money in the billions every single year, sent over there for carnage, mutilation of childrens faces by fierce hot flaming US made bombs, in order that their great grandchildren, may have a place to flee to if necessary.

One begins to wonder if the Jews will have to wait that long for the flight of their darling little Jewish princesses and little boys to Zion. I have already seen on the street the flinging arms of the “offended Goy” raised in frustration. I think it is only a matter of time before those “flinging arms of the offended Goy,” turns into a defiant fist.