Interview With Putin Banned - Pt I 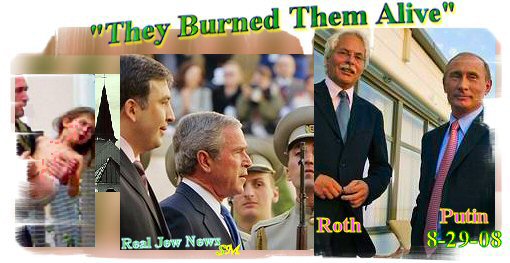 Or Send Your Contribution To:
Brother Nathanael Kapner; PO Box 547; Priest River ID 83856
E-mail: bronathanael@yahoo.com
OWING TO THE ZIONIST OCCUPATION of the Western press, not only will crucial news be distorted, but essential news will also be suppressed.

Such is the example of Vladimir Putin’s defense of Russia’s recent actions in S.Ossetia and Georgia.

The Zionist-occupied mainstream media in the West has banned an August 29 2008 interview with Putin conducted by Thomas Roth of the National German Broadcast Services. Even in Germany, the interview was censored. The Zionist Jews fear Vladimir Putin and wish only to vilify this great Christian leader rather than allow the truth to vindicate him.

Because of my contacts in Germany, the full length interview in German was sent to me Here & Here (Video). Through much expense and effort, I now make this crucial interview available in English with the hope that readers will not only benefit from hearing Putin’s defense, but will contribute to the heavy expense involved in having this interview translated.

Thomas Roth, a German national who resides in Russia, conducted the interview in Russian then translated it into German. I have availed myself of both texts through my friend, Dr E L Magerovsky, who is fluent in both Russian and German. A translation professional was also consulted. Before making your comments, please consider offsetting the huge expense involved to make this interview available in English. Thank you - Brother Nathanael.

Thomas Roth: Mr Prime Minister, after the escalation in Georgia, the international public and the press sees Russia in isolation against the rest of the world and beginning a war in Georgia. Why have you placed your country in this isolation?

Vladimir Putin: What do you think, who began the war in Georgia?

Roth: As I see it, the conflict was incited by the Georgian attack on Tskhinvali in S.Ossetia.

Putin: I thank you for this answer. That is correct, that was it indeed. We will deal more in greater detail with that later. Now I want to emphasize that we did not prompt this situation. And as regards the reputation of Russia, I am convinced that the reputation of any country capable of following an independent foreign policy that would protect the lives of its citizens, would only enhance its reputation.

And vice versa. The reputation of other countries which make for themselves a rule to interfere in the politics of other nations by extending themselves beyond their own national interests, their reputation would decrease. This says it all.

Roth: You have not yet answered the question why you have risked the isolation of your country from the rest of the world.

Putin: I thought I answered the question. But if it requires additional explanations, I will give it.

I am of the opinion that a country, in this case Russia, which would defend the honour of its citizens, whose lives it acts to protect, and acts according to international-law obligations in the context of the peacekeeping forces, it follows that such a country would not come into isolation. With regard to Europe and the United States - they do not rule the world.

And now to our international-law obligations. According to international agreements the Russian peacekeeping forces were granted the obligation to take the peaceful population of S.Ossetia under its protection. Let us recall in this connection, the year 1995 in Bosnia.

It is well-known that the European peacekeeping forces in Bosnia, which consisted of Netherlands military members, did not stop one of the attacking sides and thus brought about the destruction of an entire locality. Hundreds were killed.

This tragedy in Bosnia’s Srebrenica is very well known in Europe. Should we have acted likewise? Should we have ignored the aggression and thereby making it possible for Georgian military units to destroy human lives in Tskhinvali?

Roth: Mr Prime Minister, your critics say that your goal in S.Ossetia was not to protect people, but to try to further destabilize Georgia and to remove the Georgian president from office. Why? In order to prevent Georgia from joining NATO. Is that so?

Now let me recall the facts of recent history. After the illegal decision on the recognition of the independence of Kosovo, everybody expected that Russia would recognize the independence and sovereignty of S.Ossetia and Abkhazia. And we had a moral right to do so. But we did not do so. We acted more than cautiously and we ’swallowed’ the unlawful Kosovo action.

But what did we get in return for our restraint? An escalation of the conflict, the attack on our peace keeping forces, the raid and destruction of the civilian population in South Ossetia! These are facts that are very well known and have been published throughout Europe.

The Minister of Foreign Affairs of France was in N.Ossetia where he met with refugees fleeing from the Georgian aggressors. Even eye-witnesses reported that Georgian military units ran over women and children with tanks. They drove civilians into homes and churches and burned them alive. And Georgian soldiers bursting into Tskhinvali, when they had passed by cellars where women and children hid themselves, threw grenades into the cellars. What is this, if not genocide?

Georgian leadership, who instigated this catastrophe, has undermined the territorial integrity of Georgia by their actions. Such leaders have no right to steer a country regardless of its size. If they were decent human beings they would resign immediately.

Roth: But Mr Prime Minister, that is not your decision, that is a Georgian decision.