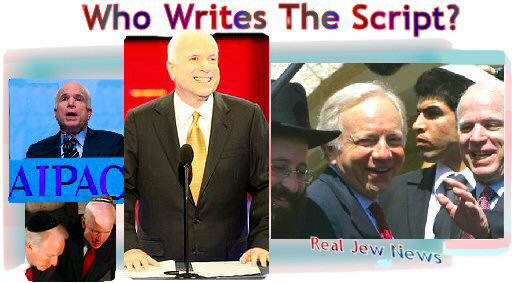 
Palin rocketed to world fame and is now one of the most powerful and compelling women in contemporary American politics. Her speech was superbly written and brilliantly delivered…a speech even more remarkable for its overall scarcity of Zionist propaganda.

As refreshing and even exhilarating as was Palin’s speech, John McCain’s was the inverse…a fetid, nauseating Zionist Israeli war manifesto and globalist declaration.

Our best bet is a clique of 6-8 Zionist Jews working for the American Israel Public Affairs Committee (AIPAC) wrote the script. It wouldn’t surprise us if the ’speech writers’ (read: propagandists) were paid up to $100,000 for their ‘consulting’ work.

Here are some sick and morbid examples directly from Johnny Boy’s Acceptance Speech:

“I’m grateful to President Bush for leading us in the days following the worst attack on American soil and keeping us safe from another attack.”

“I fought for the right strategy and more troops in Iraq.”

“And thanks to General David Petraeus, that strategy rescued us from a defeat that would have threatened the security of all Americans.”

“We have dealt a serious blow to Al Qaida but they’re not defeated and they’ll strike us again if they can.”

“Iran remains the chief sponsor of terrorism and is on the path to acquiring nuclear weapons.”

“Russia’s leaders have rejected the ideals of democracy and the obligations of a responsible power. They invaded a democratic neighbor to gain more control over the world’s oil supply. And the brave people of Georgia need our solidarity. [All of Europe knows that it was *Georgia* that *invaded* S.Ossetia. +bn]

“We can’t turn a blind eye to Russia’s international lawlessness that threatens the security of the American people.” (Cheers, applause.)

“I know how the military works, what is has done, and what it can do better. And I know how to work with leaders who share our dreams of a freer, safer world, and how to stand up to those who don’t.” (Cheers, applause.)

“Thank you, and God bless America.”

SO, IT LOOKS LIKE McBush, who may be terminally ill, is unquestionably going to serve his Zionist masters to the bitter end.

As for the ‘Jewish Crew’ who pulled his stone-cold DEAD primary campaign out of the crypt, reanimated it, and paved the way to his nomination, McCain knows very well that he must continue to play ball with them and their media-mogul synagogue buddies in order to be elected President.