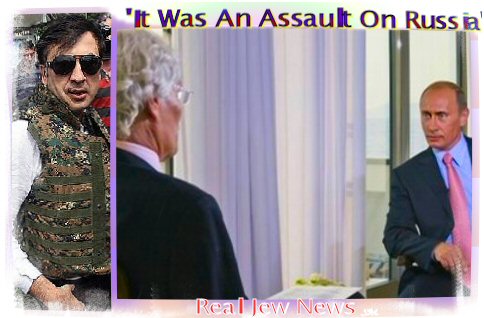 HERE IS WHERE WE LEFT OFF FROM PART I:

Thomas Roth: But Mr Prime Minister, that is not your decision, that is a Georgian decision.

We remember how the American troops marched into Iraq and what they wished to do with Saddam Hussein because he destroyed some villages of the Shiites. In contrast to this, in just the first hours of Georgia’s invasion, ten villages in S.Ossetia were destroyed, wiped off the face of the earth.

That I sit here before you now I owe to sheer luck. For a bomb from your airplane exploded one hundred meters from me in Gori in a residential area. Isn’t it a clear violation of international law that you in fact now occupy a sovereign nation? Where do you get this right?

Putin: We responded within the parameters of international law. The assault on the posts of our peacekeeping forces in S.Ossetia which resulted in the murder of our peacemakers and the killing of our citizens, we have considered without a doubt to be an assault upon Russia.

When our peacekeeping forces tried to take heavy munitions from the hanger, they were shelled by the Grad rocket stations. Ten Russian soldiers who were still in the hangers were killed on the spot - burned alive.

Putin: I am not finished yet. Then, the Georgian Air Forces attacked various points in S.Ossetia - not in the Tskhinvilli region, but in the center of S.Ossetia itself. We were forced to fire beyond the combat & security zone owing to these air attacks. These were the places where the Georgian troops were controlled from and the operation centers from which our peacekeeping forces & citizens were attacked from.

Roth: But I have told you that residential areas were bombarded by Russia. I experienced this, otherwise I would not have told you. Can it be that perhaps you do not have all the information?

Putin: Perhaps I do not have all the information. Errors during military operation are also possible. Only recently, in Afghanistan, US air forces supposedly engaged in an attack on a Taliban contingent, but destroyed instead, hundreds of civilians who were killed in one strike. This is a first example of military errors.

But the second example is even more convincing. The matter is, that the fire and control posts, the control of the Air Force and the radar stations on the Georgian side, were stationed in residential areas with the aim to restrict the possibility of Russia defending its people in S.Ossetia - using the civilian population - and you - as hostages. 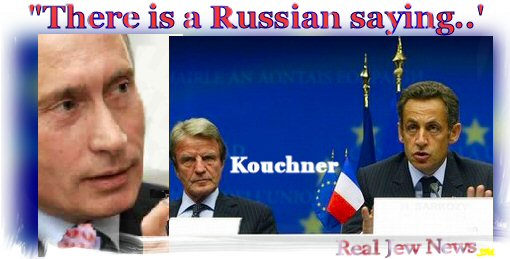 Roth: Well, that is an assumption. Mr Prime Minister, the French Minister of Foreign Affairs, Mr Bernard Kouchner, has expressed grave concerns that the next center of conflict will be in Ukraine. He mentioned in particular, the Crimean peninsula and the city of Sevastopol as the next center of Russian aggression. Is the Crimea the next target for Russia? The seat of the Black Sea fleet?

Putin: He said, ‘the next center of Russian aggression?’ But this is not the case in the Georgian conflict. We were the victims of aggression.

And you say, ‘he next target?’ In the current conflict we had no ‘target.’ Therefore it is misleading to speak of a ‘next target.’

Roth: So you exclude this?

Putin: Allow me to answer and you will be satisfied. The Crimea is not a disputed territory. There is no ethnic conflict there in contrast to the conflict between S.Ossetia and Georgia. Russia recognized the current borders of today’s Ukraine a long time ago. We basically concluded all the negotiations regarding the borders. Only demarcation issues are now being discussed. But these are purely technical issues.

The question about ‘targets’ for Russia only serves as provocation. There within the Crimea, complicated processes are in view: Crimean Tatars, Ukrainian people, Russian people, a Slovak population. But this is an internal problem of Ukraine itself.

With Ukraine we have a contract regarding the docking of our fleet in Sevastopol until 2017. We will be guided by this present Treaty.

Roth: Mr Prime Minister, another Minister of Foreign Affairs expressed his concerns, in this case, the British Minister of Foreign Affairs, Mr David Miliband. He warned of a new - I use this word as his quotation - ‘cold war’ - between Russia and the West. He warned of an ‘arms race’ beginning. Are we now on the border of a new ‘Ice Age?’ What is your assessment of this situation?

Putin: There is a Russian saying: ‘Stop the thief! The one who screams the loudest, he is the thief!’

Roth: The thief, then, would be, the British minister of foreign affairs…

Putin: This is what you say. Excellent! It is a pleasure to converse with you. Remember, you said that.

Russia seeks no provocation, no tension, with whoever it may be. We want good neighborly partnership relations. If you allow, I will say what I think about this.

Look, there was the Soviet Union and the Warsaw Pact. And there were the Soviet forces in the German Democratic Republic. And we must honestly admit, they were the occupying forces which were left in Germany after the Second World War.

It is to establish order and discipline in their own US-NATO camp - to hold them within ‘bloc discipline’ they need an outside threat. And because Iran is not entirely suitable for this role, there is a strong movement, initiated by the US, to revive the enemy in Russia. But in Europe, no one is scared.

Roth: On Monday the European Union in Brussels meets. It will talk about sanctions against Russia. Do you or do you not care since you say that the European peoples’ voice will not be represented?

Putin: If I would say we do not care, that we are indifferent, this would not be true. Of course we care. Of course we will watch very carefully what takes place there. We only hope that common sense will prevail.

And we hope that an objective and not a politicized appraisal of the S.Ossetian events will be given. We hope that the actions of the Russian peacekeeping forces will be supported. Whereas actions of the Georgian side which performed the criminal actions, we hope will be denounced.

Roth: In this context I would like to ask this next question. How do you solve this dilemma: On the one hand Russia is keen on cooperating with the EU. You cannot act differently given the economic interchange between you and Europe. On the other hand, Russia wants to play by its own rules. How can you satisfy these two issues at once?

Putin: We are not going to play by any special rules. We want all to world to act in accordance with the same rules referred to as ‘international law.’ We don’t want, however, these notions to be manipulated by anyone. In one region of the world, they will obey these rules, in another region, something else rules, only to satisfy someone’s self interests. We want unified rules that check the interests of all participants.

Roth: Do you mean that the EU plays with different rules in different regions of the world which do not correspond to international law?

Putin: Absolutely, how otherwise? How did they recognize Kosovo? They ignored the territorial national integrity attached to Serbia completely, and the UN Security Council Resolution 1244 which they together discharged and supported. There they could do it. But one wasn’t allowed to proceed in such a way in S.Ossetia and in Abkhazia. Why not?

Putin: You have misunderstood me. Do you recognize the independence of Kosovo? Yes or no?

Roth: Me personally? I am a journalist and it is my job to report.

Putin: I mean Western countries. In fact, all have accepted the unlawful independence of Kosovo. But if you recognized it there, then you must recognize it here - the independence of S.Ossetia and Abkhazia. There is absolutely no difference. No difference at all. This is an invented difference by the West.

There it was an ethnic conflict - and here is an ethnic conflict. There, it was crime on both sides. And here, probably we can find it. Probably we can find it if we ‘dig.’ There the decision has been taken that these two people cannot live together in one state - and here they do not want to live together in the same state. There is no difference at all and everybody realizes this. This is all twaddle for the West’s unlawful decisions to cover.

This is the law of the jungle and Russia cannot agree to this. Mr Roth, you have been living in Russia for a long time and you speak perfect Russian, nearly accent free. That you have understood me I am not surprised. I am very pleased. Now I would like our European colleagues who will meet on September 1 to talk about this problem, to understand all of this.

Was the UN Resolution 1244 adopted? Yes, it was adopted. Was the territorial integrity of Serbia explicitly mentioned? Yes, explicitly. It was then, in their recognition of the independence of Kosovo, that Resolution 1244 was thrown into the trash. They simply forgot it in spite of our many protests.

They tried to re-interpret it. Turn it inside-out. It was impossible to wiggle out of it — so they simply forgot it. Why? They had orders from the White House and all have obeyed.

If European nations continue with this policy of obeying orders from the White House, then we will just go straight to the source of their policies and of all European affairs, and negotiate with Washington!


And: “Is Putin A True Christian Leader?” Click Here