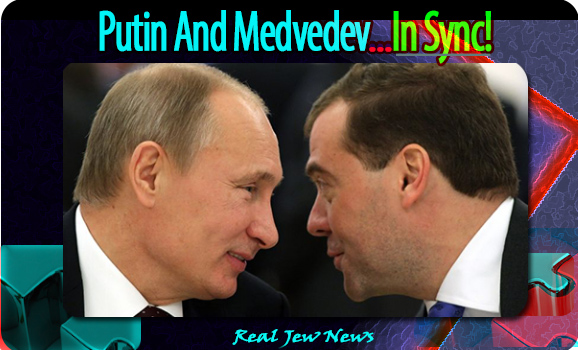 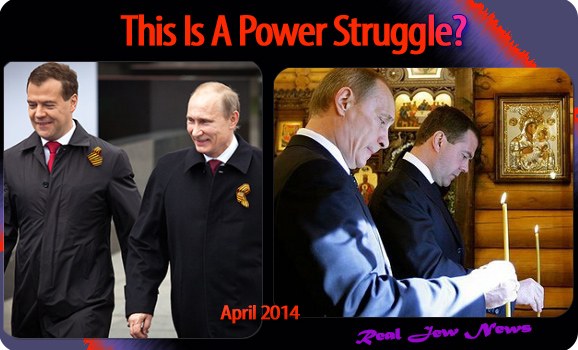 THE DRIVE TO DIVIDE Putin from Medvedev is an ongoing disinfo project of the Jewish-owned press, of which, some pro-Russia sites have bought into.


The so-called ‘division’ can be seen in The Saker’s analysis of a supposed “power struggle” within the Kremlin walls: “Medvedev represents the Atlantic Integrationists (West-inclined) and Putin the Eurasian Sovereignists (Russia focused).

As recent as April 2014, The Saker predicted that Putin would “sack” Medvedev as prime minister and “replace” him with a “very different figure.”

Never happened. “Predictions” by arm chair soothsayers who live thousands of miles from Moscow are like bubbles meeting solid objects: they quickly dissolve into non-existence.

Conjecture has it that tensions between the two leaders began when Medvedev, acting as President, “abstained,” rather than using Russia’s “veto,” with regard to the US-led UN Security Council’s decision to launch a ‘humanitarian’ No-Fly Zone in Libya in 2011.

Was it naive trust on Medvedev’s part, blindsided by Jewmerica’s scheme to overrun Libya, and not foreseeing that the Atlantic alliance would completely overstep the UN mandate on the side of the Libyan rebels against Gaddafi, that informed Medvedev’s “miscalculation?”

Yet contrary to all the disinfo barfed out by the Jew-owned press, not a word against Medvedev by Putin was ever heard by the myriads of Jewish disinfo agents.

And to this day no one really knows why Medvedev (surely he would have consulted with Putin) didn’t veto Nato’s rape of Libya. 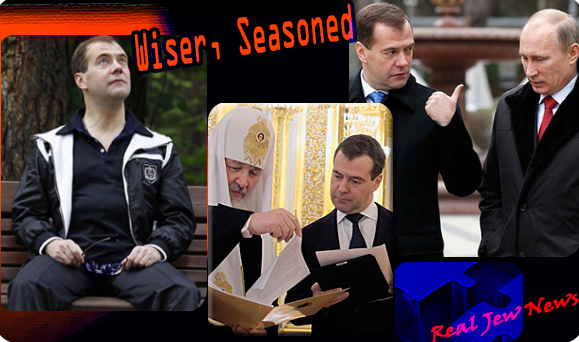 IF EVER A SUCCESSOR to Putin must be found, one need not look beyond the person of Dimitri Medvedev, now older, wiser, and more seasoned.

By law, Medvedev would immediately fill Putin’s position, since in the case of the President’s death or resignation, the Prime Minister (”Chairman of the Russian Federation”) becomes President until new elections take place.

The Prime Minister serves at the President’s pleasure. Putin could dismiss Medvedev at any time.

Thus, it is abundantly obvious that Putin and Medvedev are not only in complete sync with Russia’s domestic and foreign policies, but Putin has great confidence in Medvedev to steer the ship as head of state if urgently needed.

While reports of Medvedev’s political demise were greatly exaggerated by the Jew York Times and a host of other Jew-owned propaganda machines, most Russians applaud Medvedev’s fusion with Putin…ripened as a “superpower” team.

The latest Levada poll reveals that 68% of Russian citizens consider Russia, ruled from the Kremlin, as a superpower. 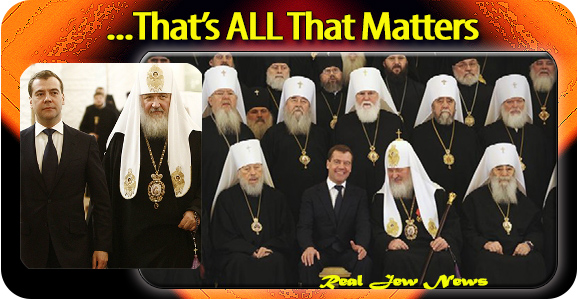 LOOKING AT MEDVEDEV’S background, one must note that his formative years were in the 1970s, when Soviet teenagers were smitten by Western pop culture.

Enjoying a PhD in Law in 1990, he soon joined Putin in St Petersburg, both working for its mayor.

Putin handpicked Medvedev to be the city’s legal expert. Their warm ongoing relationship continued from that point up to the present day.

The father-son/teacher-pupil kinship that was forged in St Petersburg between Putin and Medvedev is today set in steel in the Kremlin.

And NO, Medvedev is NOT a Jew.

Medvedev denies rumors that he is Jewish by saying that his maternal grandparents originated from Belgorod Oblast and had the Russian-sounding surnames Shaposhnikov and Kovalyov.

At the age of 23, Medvedev felt a strong need to be baptized in the Russian Orthodox Church. “My life was changed,” said Medvedev, reflecting on his baptism.

Regardless of his ‘racial’ makeup, Medvedev is a baptized member in good standing of the Russian Orthodox Church…and that’s all that matters. 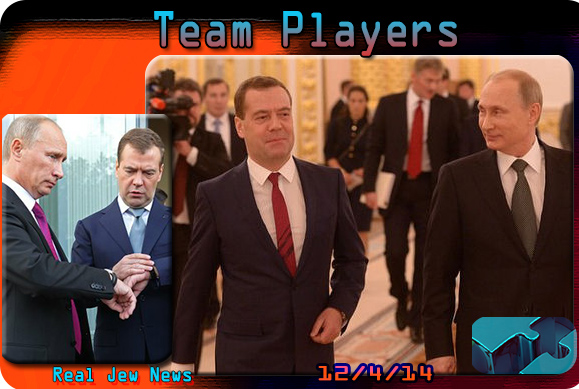 PERHAPS THERE WAS an “Atlanticist” slant and a “pro-West” bent in Medvedev’s foreign policy, but the valley has been filled and the crooked has been made straight.

The gloves came off last July when Medvedev called America’s sanctions, “evil,” adding that Russia would not be bowed since “such sanctions” fail to bring any nation to its knees.

“There will be a further consolidation by Russian society against those countries and people who try to act against the interests of its citizens,” Medvedev warned.

What country is Medvedev pointing to? Jewmerica. What people? Jews. 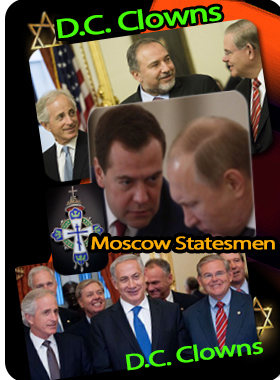 Russia’s leaders are not clowns like the hacks in DC who take orders from Jews. They know what people comprise “special interest” groups that dictate policy in Washington.

And it’s not Gentile businessmen of the US Chamber of Commerce or Black functionaries of the NAACP.

Medvedev upped the ante a few days ago when commenting on Jewmerica’s so-called Ukraine Freedom Act 2014 and Ukraine’s intent to cancel a national law forbidding it to join military blocs.

“Our relations with America will be poisoned for many decades to come,” Medvedev remarked.

“By Ukraine changing its out-of-bloc status, it would in essence be an application to join NATO, rendering Ukraine a potential enemy of Russia,” he added.

Then in a stunning essay titled, Russia And Ukraine: Living By New Rules, Medvedev excoriated Kiev for its abominable actions against its own citizens in Eastern Ukraine.

“Is it not enough that Ukrainian troops are shooting at civilians? Must they also economically destroy these people and the entire region? This is unprecedented.

“Will hunger and poverty make the residents more tractable? Clearly, this is how Kiev sees the peace process. Surely this is the ’strongest’ argument to convince Eastern Ukraine to follow the rest of Ukraine down the European path.” View Entire Story Here & Here.

And Novorussia will not follow the path to hell.

A “EUROPEAN” PATH means the end of Ukraine’s sovereignty, pillaging of its resources, and its mutation into a Jewmerican military colony, along with the subversion of its sexual mores via Jewry’s prized means of expropriation, the promotion of homosexuality.

Although viewing Ukraine’s plight as “tragic,” Medvedev will not be sidetracked.