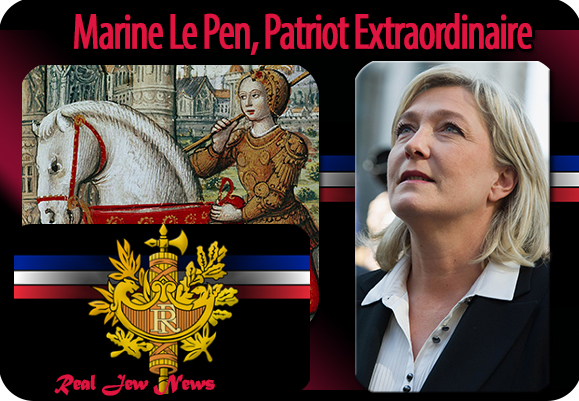 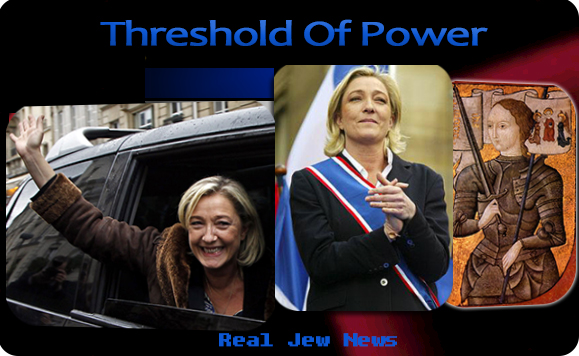 “POLITICS IS THE ART of the possible, the attainable—the art of the next best,” said Otto von Bismarck.


And when asked what was the greatest political fact of his time, he replied, “the fact that North America speaks English.”

While the art of the possible was not part of St Joan of Arc’s range of activity, (burned at the stake for her unwavering vision), in the case of Marine Le Pen, (head of the ‘right wing’ Front National party), “the art of the next best” appears to be her modus operandi.

Yet, at the same time, the greatest political fact of Le Pen’s time, is the fact that France (and all of “Western Christendom”) is overrun by mass immigration from countries with different cultures, habits, and worldviews.

With this scenario at the forefront of Le Pen’s political climate, she is no less unyielding than Joan of Arc. View Le Pen’s Platform Here.

Besides the FACT that JEWS are the driving force behind mass immigration flooding Western Christian lands, (in France, immigrants from Sub Saharan countries), Le Pen sees her task as preserving France’s “Christian Tradition” that has informed French culture.

While the Jew-run EU denies the central role of Christianity in Europe’s formation, Marine Le Pen, in her quest to guard France’s national identity, shaped largely by the Roman Catholic Church, is standing at the threshold of power. 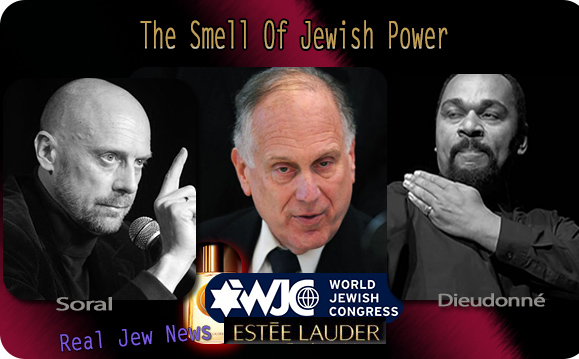 Displeased with the “pro-Israel” stance of Le Pen’s adviser, Aymeric Chauprade, the duo created their own party, Réconciliation Nationale, where as co-presidents they’ll blend their distinctive trajectories. View Video Here.

Dieudonne sees the party as a vehicle through which he can respond to the “flunkies of the World Jewish Congress” which forced the government to ban his shows.

Soral wants Réconciliation Nationale to counter Chauprade’s betrayal (due to the sellout of French Muslim patriots that Soral enlisted) with the same anti-Zionist zeal he wielded when chairing a seat on FN’s central committee.

In Dieudonne’s popular video last October, he exposed Ron Lauder, the president of the World Jewish Congress, as a spiritually bankrupt Jew:

“Lauder. Oh, the smell [he’s heir of Estée Lauder.] He’s a billionaire. He buys paintings for millions like you buy a comic book. He puts it over his fireplace, he looks at it and says ‘I’m happy’ and when the fire runs low he throws it in the fire.” View Video & Story Here & Here.

Regarding the split, when it comes to French politics, (and it could be strategic kabuki between the two and Le Pen), when push comes to shove, they’ll likely kiss and make up.

The split could be that Réconciliation Nationale, while getting the publicity in order to get its “anti-Semitic” anti-establishment message out, will also be functioning as a political cul de sac channeling the energies of the more volatile of the nationalists.

At the same time, the split helps polish Front National’s image of the mainstream center-right party reformed under Marine Le Pen, securing a wider appeal among the growing number of disenchanted voters from a wide range of French society.

For with unemployment at new highs, Le Pen, twice as popular as Hollande, could very well become the country’s next president. 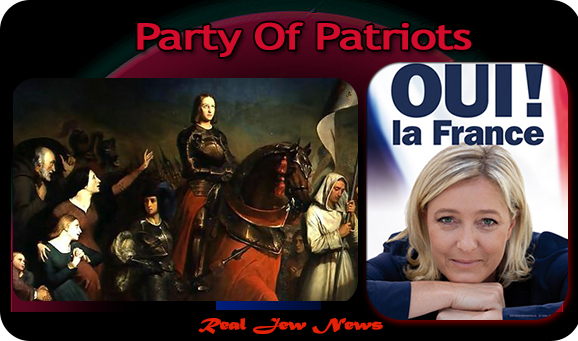 LIKE JOAN OF ARC of old, Marine Le Pen is hailed and admired as “defender of France,” and as France’s “only hope.”

She and her staff currently describe the National Front as “a party of patriots.”

“We want to assert our right to national priority,” Le Pen says. “People want to live like French people in France, not like Saudis or Qataris.”

On the fringes of political clout only two years ago, Le Pen has propelled her party to power in twelve French towns, two seats in the Senate, and top position in the EU parliament.

Branding Front National as “extremist,” “far right,” “racist”—Jewish buzzwords that should suggest to the keen observer that the targeted object is doing something right—the Press warns all the (Jew-bought) politicians that the NF’s platform is “dangerous” for Europe.

IT’S ALL ABOUT the Great Sanhedrin leading yet another who threatens their influence to Pilate to be crucified.

“This is our Europe,” says Kantor. “As Jews, we know the dangers when a society turns to nationalism.”

The “dangers” of nationalism for the international Jew, who has no loyalty but to his own, is that a host country will turn to its Christian roots and see the Jew for what he is: an alien force, a parasite, and subverter of Christian unity.

That’s the bottom line. Le Pen is no fool. She knows what she needs to do to engage a broader constituency.

But when she comes into her kingdom…no Jew can block her nationalist vision.

And: The Struggle To Save Inner Europe Click Here