The Zionist Murder Of Muammar Gaddafi

THE ZIONIST MURDER
OF MUAMMAR GADDAFI 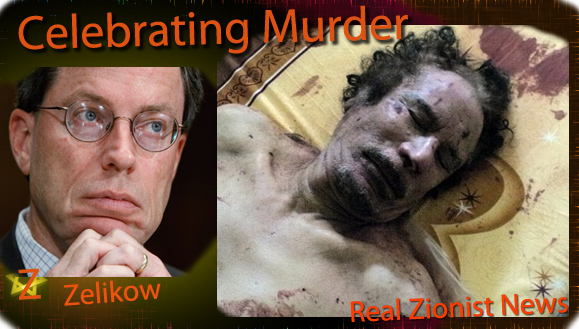 THE BRUTAL MURDER of Muammar Gaddafi by Zionist-owned Libyan insurgents is an example of what happens to political leaders who defy international Jewish bankers.

Gaddafi refused to do the bidding of the Rothschild-centered global banking cartel in 5 areas:

IN JULY OF 2011, the son and heir apparent of Muammar Gaddafi, Saif al-Islam, stated that it wasn’t just Libya’s ‘black gold’ (oil) that the Zionist West wants, but Libya’s ‘blue gold’ (water) – the some 500 miles of the Nubian Sandstone Aquifer System that lies beneath Libya’s surface. 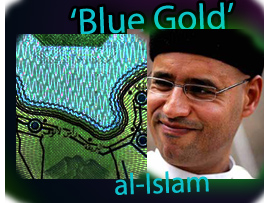 The Nubian Aquifer is the only fresh water source that remains in North Africa and thus is the focus of what has become known as “Water Wars.”

Two French water firms, the largest in the world, Veolia and Suez SA,” says al-Islam, want to own the Nubian Aquifer, since they will make countless billions in profit from food grown from the water.

Both Veolia and Suez SA, like all multinational corporations, are doubtless funded by Jewish finance capital. And Louis Dreyfus International, a Jewish French firm, would apparently be the food broker.

Al-Islam points out that every IMF and World Bank loan, both controlled by Zionist Jewry, is issued on the condition that the victim-nation sells its water supplies to private investors. View Entire Story Here, Here, Here & Here.

It appears that Saif al-Islam’s testimony against Zionist Jewry has been silenced forever as he has been reportedly encircled by the Zionist-owned Libyan insurgents on October 20, 2011, the same day his father was captured and mercilessly murdered.

Gaddafi’s main threat to International Jewry’s Banking Cartel was his plan for a common African currency—the gold-backed Libyan dinar—which would have replaced the all fiat-issued US dollar, British pound, and French franc as the main currency in Africa.

Is it any surprise then that the three major invaders of Libya — America, England, and France — whose Zionist-bought leaders: Obama, Cameron, & Sarkozy, are praising the brutal and slow murder of Libyan chief, Muammar Gaddafi?

No, it is no surprise at all. View Entire Story Here, Here & Here. 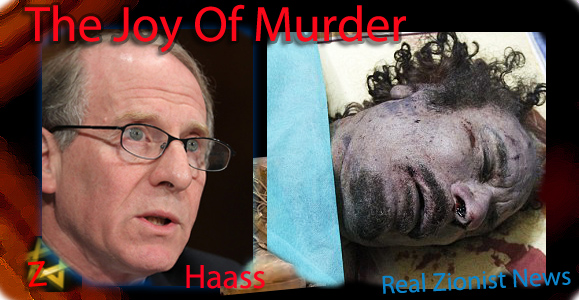 CALLING FOR BOOTS on the ground, Jewish president of the Council on Foreign Relations, Richard Haass, after admitting that the Libyan invasion was to oust Gaddafi via “regime change” — sought a US-led NATO occupation of Tripoli.

Leading the Zionist fray, it was the same Jewish sleaze balls who brought us the Iraq War through their lies about Saddam’s ‘weapons of mass destruction,’ namely, the “Project for a New American Century,” now reincarnated as, “The Foreign Policy Initiative,” who urged in their June 2011, “Open Letter To House Republicans,” the toppling of Muammar Gaddafi. 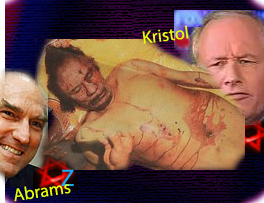 THE SIGNATORIES to the Letter read like an invitation to a Bar Mitzvah…this time a very bloody one indeed:

Kristol and his fellow blood-thirsty Jews have now seen their dream come true.

In violation of both International Law and the Geneva Convention’s prohibition of the mutilation of prisoners of war, Muammar Gaddafi is now among the Zionist-murdered dead.