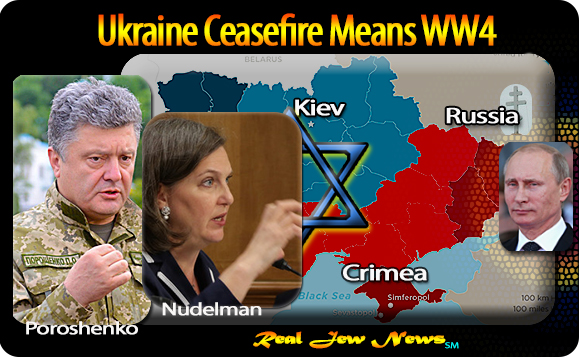 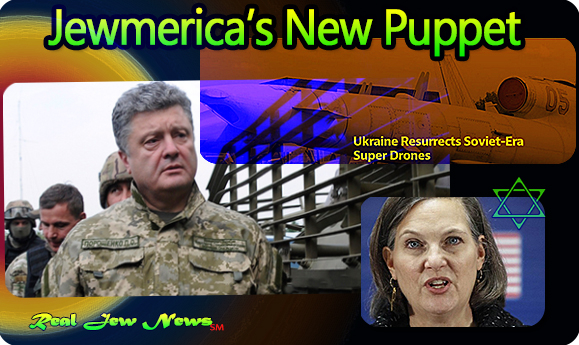 “PUTIN WELCOMES KIEV’s CEASEFIRE,” reads the headline. But Putin is no dummy. He’s no sucker either.


He’s got the best and the brightest working for him…not like DC, where wicked Jewish women call the shots.

Putin is not going to be sucked into a war in Eastern Ukraine unless it’s a defensive war caused by Kiev’s military crossing over into Russia’s borders, now being compromised.

Putin will not play by NATO’s rules and get sucked into what the Jewish-ruled West wants via Kiev’s provocations with Jewmerica’s counsel and approval.

And certainly the aim of Jewmerica is to provoke Putin into an ‘aggressive act’ which will justify a NATO base in central Ukraine with its missiles aimed at Moscow.

As for Poroshenko’s ‘peace plan,’ what it really means is that the South Easterners lay down their arms and surrender.

Alexander Borodai, Prime Minister of the self-proclaimed Donetsk People’s Republic, remarked, “After the disarmament, our fighters will have to march in columns to the Ukrainian filtration camps.”

The Poroshenko regime is planning to pass many citizens of East Ukraine through “filtration camps” particularly from separatist Donetsk and Lugansk.

The creation of this Stalinesque institution in Ukraine was publicly announced by no less than Kiev’s Minister of Defense Mykhailo Koval. 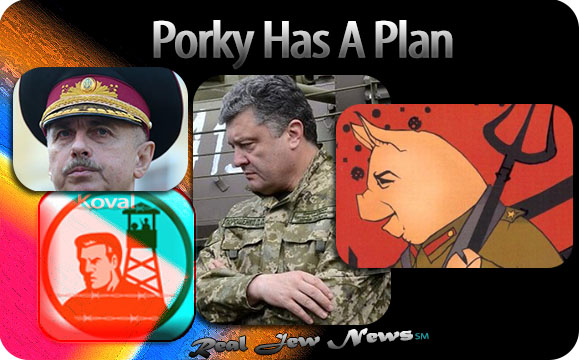 The citizens of the self-proclaimed people’s republics of Donetsk and Lugansk are under no obligation to abide by Porky’s ‘peace plan’ since there are no negotiations which they participated in and agreed to as independent republics established by their democratic referendums. View ‘Peace Plan’ Here.

Putin “welcomes” the cease-fire but he is demanding Kiev begin negotiations with the pro-federalists and people’s Republics; halt all military activity including deployments to strategic positions; cease abducting and killing civilians and militias; and freeze the replenishment of reinforcements and supplies.

The restocking that US-puppet Poroshenko has in mind during his ‘cease fire’ while readying “Plan B” (genocide)…is waiting for more armored rolling stock, resupplying the troops, and beefing up the military with new conscripts and fresh recruits for the National Guard/Right Sector.

He’s busy getting mothballed military equipment out of storage and rehabilitated. That takes money. Jewmerica has the money via the Fed. Ukraine is occupied US territory.

The West-supported militarization of Ukraine in this civil war—created by DC in league with the Ukrainian oligarchs—is a step towards eventual war with Russia and Orthodox Civilization. 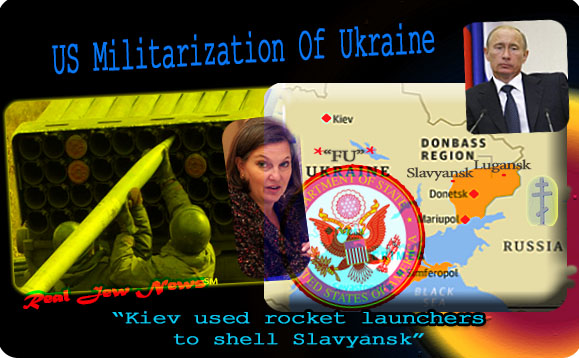 ALTHOUGH RUSSIA IS AGAIN a Christian nation, yet America is planning a full-scale war against it.

How can this be if America is a ‘christian’ nation?

BECAUSE America is overrun by JEWS and Jewry HATES Orthodox Christian Russia.

Jewry is hell-bent via US policy (which JEWS control) to destroy Russia’s “Symphony of Church and State” whereby Christ-hating Jews are de facto second-class citizens.

The shame of Jewmerica waging war on Russia is that America was once a friend and ally of Tsarist Russia, a partner in promulgating the Christian faith.

Currently, Russian economist Sergei Glazyev, appointed by Putin to help develop the Eurasian Union, is warning that America is in the process of fully “militarizing” Ukraine with the immediate aim of bringing Eastern Ukraine into serfdom:

“Kiev is destroying the infrastructure of Donbass. They’re bombing hospitals, buildings, kindergartens, and schools, preparing the people for serfdom, which they make no secret of. Just listen to the statements made by Kiev’s chief ideologists, such as Lyashko.”

“This is a war by the United States against us,” continues Glazyev. “They are pushing the war, providing the weapons and finance, and directing the campaign. Their goal is a war against Russia – that’s not something we can just sit out.” View Entire Story Here. (Scroll Down For Transcript) 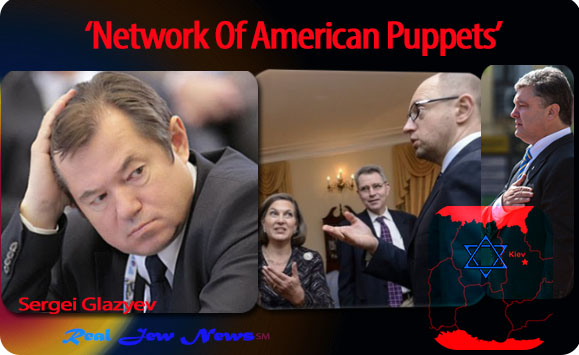 ACCORDING TO GLAZYEV, a coming “genocide” can only be averted by Russia acting militarily, and acting quickly.

By midyear it will be too late with Kiev fully armed, fully equipped, fully backed by America. “We have the right under international law to stop the genocide,” says Glazyev.

“Let’s be clear about our frame of reference” continues Glazyev. “The Kiev leadership is not independent. They’re a network of American agents – American puppets.

“The Americans have legalized the stationing of their military instructors there. The Security Service is fully under the control of the CIA. It’s US occupied territory.

“We need to talk about their illegal occupation of the territory and its liberation.

“Look how they use the media to drive up hysteria, by which the Americans will unleash the 4th World War after they wage a regional war in Europe. The Americans have gained from every war in Europe.” View Entire Story Here. (Scroll Down For Transcript)

But Putin’s no fool. He knows when to hold, when to fold…what to lose, what to keep.

Nudelman handed him Crimea on a cookie dish. He’s gonna get the whole pie.