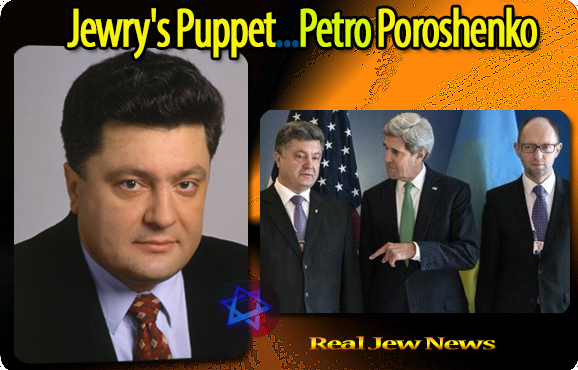 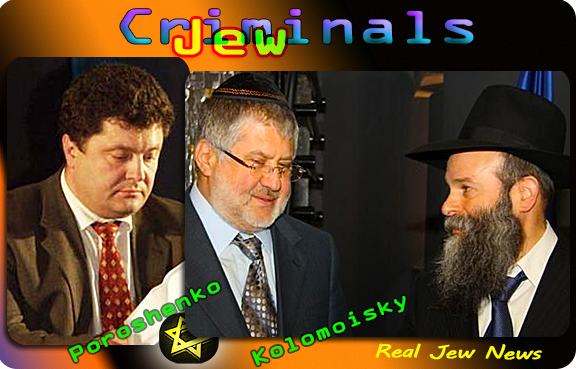 HIS FATHER’s SURNAME is “Valtzman,” a Jew, yet Petro Poroshenko uses his mother’s maiden name, “Poroshenko,” reportedly also a Jew.


Regardless of Poroshenko’s Jewish background, (or because of it), he is being pushed by all the Jewish-controlled main stream media venues throughout the Jewish-ruled West.

But what the Jew-owned press won’t tell you is that Poroshenko is a proven criminal who will still need Oligarch Jew Igor Kolomoisky:

The • coup-regime-appointed Governor of Jew-intensive Dnepropetrovsk in East Ukraine where the violent Right Sector set up their new headquarters; • boss of the Ukrainian mafia; • his Privatbank “quasi-military forces;” • his privately-funded death squads; • his bounty-hunters from his allies of ultra-nationalist extremists; • his gangs of hired thugs and soccer “ultras”…ALL to cement his rule as Ukraine’s unconstitutional president. 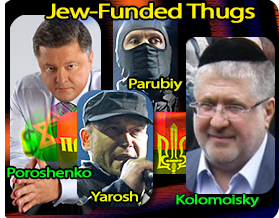 The Kolomoisky-backed Right Sector/Svoboda militants will wield power as dominant members of Poroshenko’s regime or behind the scenes.

This “National Guard” is murdering civilians and army “deserters” in Eastern Ukraine. 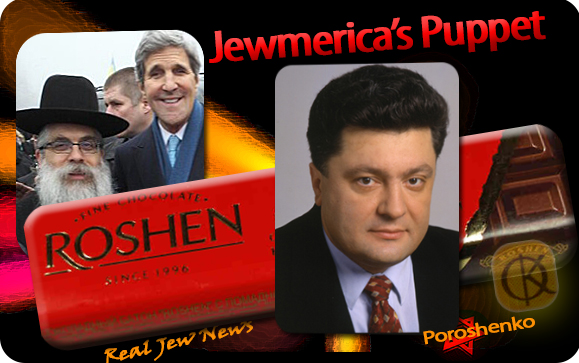 WITH THE GROWING entrenchment of the Right Sector in Kiev’s infrastructure, Poroshenko has little choice but to allow it a major measure of power.

• White-House-connected President of the United Jewish Community of Ukraine, Igor Kolomoisky, who was behind the Odessa massacre; • to Right Sector leader Dmitry Yarosh—with his early alliance with the Ambassador of Israel in Kiev—• stretching to former Vinnitsa mayor, Vladimir Groisman, a major funder of the Maidan protests.

Surely, it’s the strangest mix of bedfellows only the Jews (and Jewmerica) could cook up.

The prospect for consensus in Ukraine’s racial and linguistic spheres thus looks grim.

The Right Sector bloc controls Kiev’s press which propagandizes ‘unity’ based on hatred for Russians. This bodes ill for Ukraine’s territorial cohesiveness since much of Eastern Ukraine’s population is made up of Russian-speaking residents. 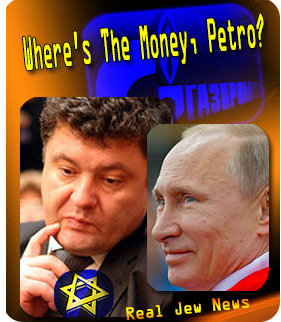 Chocolate king Poroshenko has another big problem. Ukraine’s economy is in ruins.

What will he do to fix the economy? Will he ask the IMF for another loan? But this will enslave Ukraine to Jewish bankers forever.

How about him signing the EU Association Agreement which he promises to do?

But by doing so, Ukraine will lose its military manufacturing trade with Russia.

Putin recently warned that by signing the EU Association Agreement—which will impede Ukraine’s manufacturing trade—it will sink the last nail into what remains of Ukraine’s dying economy. View Video and Transcript Here.

Putin also promised he will “work” with the next president—now Poroshenko—albeit he’s at odds with his unconstitutional status.

“Where’s the money?” will be first on the list of Things To Do.

Looks like Putin is gonna BITE the tummy of Ukraine’s kosher chocolate king.