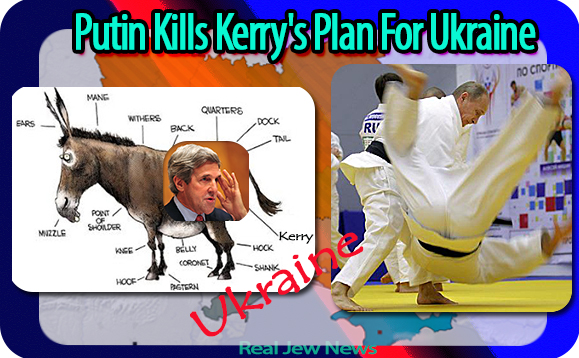 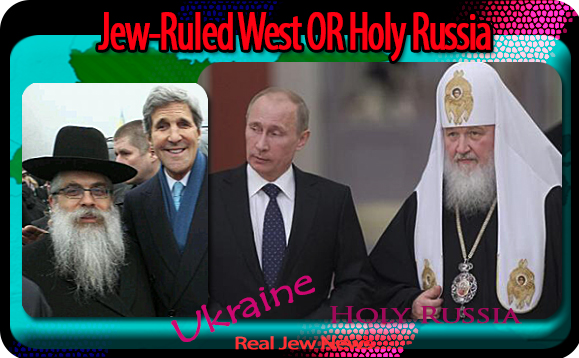 IF HUMILIATION DICTATES US foreign policy, it can only respond with spite.


Kerry’s Jew-ridden State Department has done just that, letting resentment dictate the framework for diplomacy by imposing visa restrictions on unidentified ‘Russian officials’ for supposedly ‘threatening the sovereignty of Ukraine.’

(It’s hard to bite with false teeth…so find some way to get back at those so-and-so’s.)

It’s a you-spoiled-my-party retaliation against Putin for taking the spoils in the aftermath of Kerry’s coup d’etat in Kiev. …”It’s my party and I’ll throw a tantrum if I want to.”

In a stunning grassroots development, Putin’s garland shot forth new petals today with the near unanimous vote of Crimea’s parliament to join the Russian Federation and pushing up the upcoming referendum on Crimea’s status from March 30 to March 16.

With shouts of “Russia, Russia!” the residents of Simferopol, the capital of Crimea, cheered the vote with smiles of euphoria.

But with humiliation running high in the western part of Ukraine, a court in Kiev ruled that the Crimean parliament’s actions are ‘illegal.’

An arrest warrant was issued for the new prime minister of Crimea, Sergei Aksyonov, whose political party is aptly called Russian Unity. Good luck catching him with militias surrounding him!

Just today, the Ukrainian Central Election Commission ordered that access to the voter database in the Autonomous Republic of Crimea, which is expected to hold a referendum on its status on March 16, be blocked.

That oughta crank up the Crimeans real good!

If Kiev had adhered to the EU-brokered February 21st Agreement the Autonomous Republic of Crimea (ARC) would have remained in Ukraine as a federated republic.

But now, the ARC will likely federate with Moscow upon referendum outcome, and like dominoes, East/South Ukraine will either press for full autonomy or seek to join the ARC. 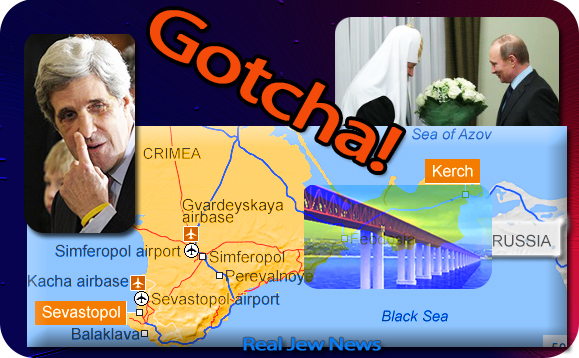 A BRIDGE TOO FAR

WHILE THE SELF-IMPOSED illegitimate regime in Kiev begs for money from Jews of the IMF, Putin is building a bridge between Russia and Crimea.

Pressing ahead with plans to build the “Kerch Bridge” across the Kerch Straits linking Russia with Crimea, the geopolitical prize goes to Putin while Kerry’s Jew-ridden State Department knashes its teeth.

While the region is legally leased from the Ukraine government, yet as the political spoils tilt toward Moscow, instead of a Ukraine-Russia set up, it will be a Crimea-Russia Bridge Authority arrangement, and Christian Putin takes all.

For with the prospect that Ukraine will lose Odessa, (their other seaport), Kiev will be left completely landlocked.

What Kerry and Nato would ideally like to do with an intact Ukraine is take over the bases in Crimea, and the Black Sea would become a virtual NATO lake.

But with Crimea likely to become a federated republic of the RF….as a Russian platform it will check Nato in Romania, Bulgaria, and Turkey, as well as any possible Nato bases set up in Ukraine itself.

An anti-NATO missile base in Crimea would also check NATO’s missile base aspirations in Moldavia and Georgia.

Simply put, Putin is building a bridge too far for Jew-ruled Nato to counter.