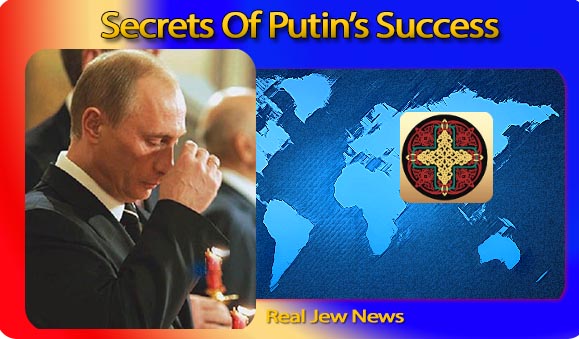 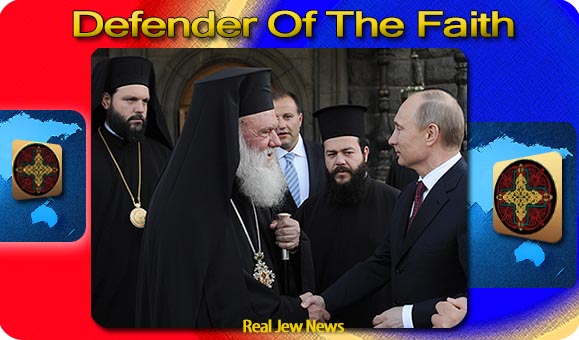 THE MASTER OF GEOPOLITICS has done it again and the world will never be the same.


Putin foiled the Jews in Syria and his current masterstroke in Ukraine has the Jews enraged.

He pulled Ukraine from the decadent Jewish-ruled EU and its Jewish bosses in Washington.

And now the world holds its breath until beholding the next conquest of Vladimir Putin.

How does he do it? Is there a ’secret’ to Putin’s success? Indeed there is.

Putin Is A Devout Orthodox Christian

As a Christian leader within the Byzantine model of “Symphony of Church and State,” Putin has God’s blessing, guidance, and protection on his administration.

This is in accordance with the ancient Orthodox blessing on Christian Emperors as God’s regents on earth; as “defenders” of Christendom; and of being “God-Protected.”

Putin sees himself in the tradition of the Tsars and promised to “defend” persecuted Christians worldwide in a speech to Russian hierarchs this summer.

Last year, Putin gave his word to the Church that he would make the protection of Christians a foreign policy priority.

As Russia’s leader, Putin has installed “Orthodoxy 101″ of which children are taught the Orthodox Christian Faith in the nation’s public schools.

Putin has also: Banned homosexual parades; forbids the dissemination of homosexual propaganda; shut down gambling casinos; and has proclaimed Russia’s adoption of the Orthodox Faith in 988 AD as a national holiday. 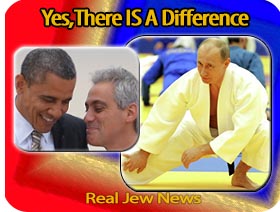 Putin tossed the Jew-ruled EU and all of its Washington Jewish bosses with one over the shoulder Judo throw…using their momentum against them in Ukraine.

The Master has shown the world that diplomacy is better than murder and financial slavery…the only policies Jewmerica and its captive nations of the EU know.

Putin Is Smarter Than Jew-Controlled Obama

Putin out-witted the schwartza in the White House (who wanted to bomb Syria into the stone age) by having Assad agree to destroy Syria’s chemical weapons.

Due to Putin out-maneuvering the moron in the White House he has become the ipso facto leader of the free world.

SO WHAT IF THE JEWS despise, trash, and demonize Putin? (They actually fear him.)

Putin’s got the better of them and foils them at every turn.

And now with the Jews destroying the Western World with their homosexual agenda, only Putin is defending conservative traditions and speaking out for Christian values.

Finally, there’s a leader in this world who’s dealing a death blow to international Jewry.