Putin Trips Up AIPAC On Syria 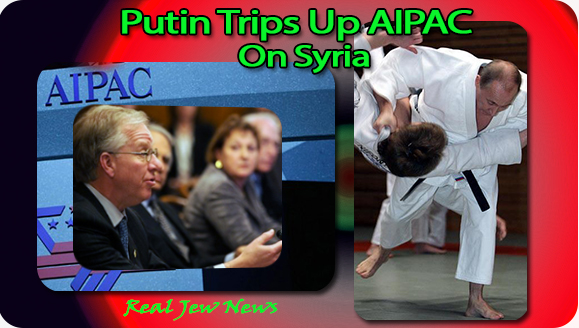 Putin Trips Up AIPAC
On Syria 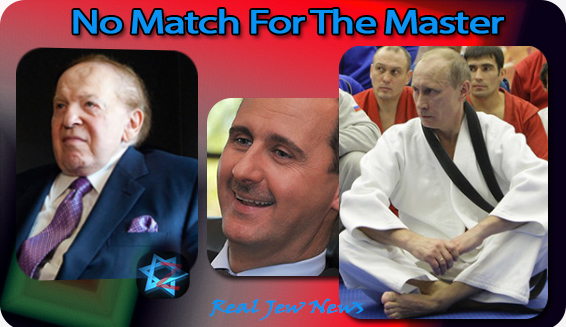 THE MASTER STRIKES AGAIN… this time tripping up Jewry’s plans to use a bombed-out Syria as a half-way house on their way to blow up Iran.


While AIPAC led the charge along with fat cat Sheldon Adelson and countless other Jewish organizations to use the US Military to do their dirty work on the sovereign nation of Syria, it was Russia who took the high ground to stop the Jewish rampage.

Over and over again, Russia reminded the world that not only was America deficient in presenting viable evidence that Dr Assad used chemical weapons but that a US strike on Syria would violate international law.

And now, Putin (a master of Ju-Jitsu which uses leverage to make an opponent’s body work against itself), has tripped up AIPAC by diffusing the crisis via a pre-arranged agreement with Dr Assad to have Syria surrender its chemical weapons.

Putin is the Black Belt of the world — he tossed the West, Israhell, the Syrian National Council, and the Gulf Arab monarchies in one beautiful over the shoulder Judo throw using their momentum against them.

And the Master has shown the world that diplomacy is better than murder…the only policy Jewry and its captive nation, Jewmerica, knows.

Do Jews care about what’s moral or illegal?…Read the Jew-owned New York Times article, “Bomb Syria Even If It’s Illegal,” and decide for yourself. 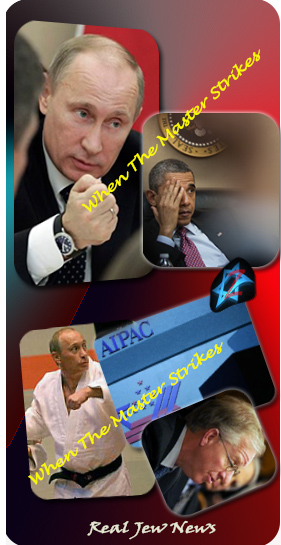 But now Putin, NOT Jewmerica, is calling the shots. And that’s the way it should be now that the Mideast is ‘up for grabs’ with regard to geopolitical powers of influence.

The only way Dr Assad would surrender his chemical weapon missile system—since it is Syria’s key deterrence and defense system against Israel…admitted by Israel—would be in exchange for something which is an even stronger defense system, which would also be protective of Russia’s interests inside Syria.

How to steal the thunder from Tel Aviv and DC? It would be to remove the fuse from this ‘time bomb.’

Critical parts of the Syrian chemical weapons arsenal, especially its delivery systems and most vulnerable and dangerous agents, can be carried safely to a temporary storage area in Russia, under UN auspices.

The only person who could solve this problem is Putin. He has the means and is trusted by Assad to allow Russian special forces to remove chemical weapons and load them onto the large landing ship Nikolai Filchenkov guarded by a contingent of Russian marines.

But what about the ’special cargo’ the Nikolai Filchenkov picked up in Russia?

That Russian “special cargo” on its way to Syria could be the extremely advanced S-400 missile system which Russia has said is not available at this time in the arms trade business.

Yet, it was Putin himself who warned that Syria will soon have weapons not seen before in the Middle East if the US did not back off of its plans.

If Russia is indeed hauling its S-400s for Syria on its naval landing ship—which can certainly take the weight being a tank hauler and can beach itself to offload if no port is available—we are talking about a deployment time of about 5 minutes after the mobile launchers arrive at their destinations after being driven off the ship.

And this is why Jewry is NOT happy about Putin tripping up their war-mongering plans.

BUT ARMAGEDDON has not been defeated…it’s just been postponed.

AIPAC, Adelson—and those hundreds of Jewish organizations—have BILLIONS of dollars at their disposal.

And Jewish dollars is what rules Capitol Hill and what makes “bringing democracy” to the world a laughable, (yet dangerous) American farce.


Thank You Servants Of Jesus Christ