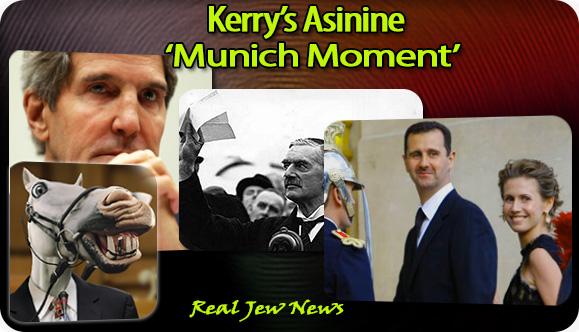 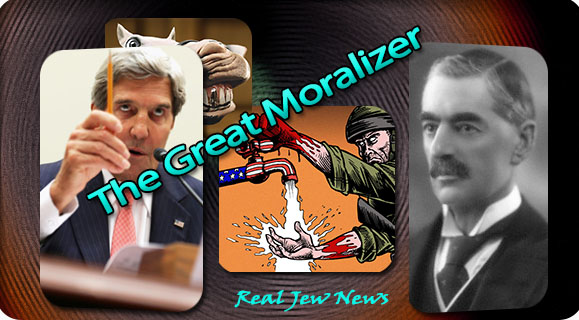 “This Is Our Munich Moment!” the horse’s ass John Kerry proclaimed to Congress and to Hollande this past week in his push to bomb Syria into the stone age.


But the French are mocking Hollande as Obama’s “lackey” who in a TV satire is seen interrupting a visit to a school to ask Obama’s permission to use the bathroom.

This asinine, “This Is Our Munich Moment,” is simply war rhetoric pandering to the French and is beyond pathetic… nauseating, and ultimately a false analogy and abuse of history.

The over-used line is a reference to the policy of so-called ‘appeasement’ that failed to stop NS Germany in the 1930s. I’m surprised Kerry didn’t add, “Are you scared yet? The Syrians are mobilizing to take the Maginot Line…oh wait.” 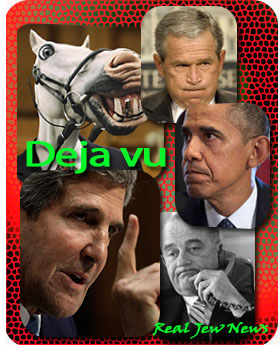 Almost every US ‘military intervention’ – from WW2 to Iraq – has been preceded by some horse’s ass saying this is our ‘Munich Moment.’

“This is not the time to be silent spectators to slaughter,” Kerry moralizes to us while American drones and bombs land on innocents in Yemen, Pakistan, and Afghanistan.

‘This is not the time to allow a dictator unfettered use of some of the most heinous weapons on earth,” vomits out Kerry.

Yet both Kerry and Obama have arrogated to themselves ‘dictatorial powers’ by insisting that the White House can bomb Syria even if Congress votes No.

Kerry’s ‘Munich Moment’ bombast does not sound like the rhetoric one would use for limited ’surgical’ strikes which Kerry absurdly calls in Orwellian news-speak a “political action” not a military one.

This is the rhetoric one uses to go to war…war in the traditional sense, like WWII, Vietnam, Iraq, Iraq again, Afghanistan, the ones that include invasions and full scale carnage…even ‘humanitarian’ interventions that left Libya bleeding in ruins.

With the Jew-owned worldwide press on his side, Kerry gets headlines in his claims that Obama has won key political backers…(Pelosi looks positively love struck at the War-Room Meeting in the White House)…and that countries around the world are backing a US strike.

On the contrary, only the Jew-bought hacks on Capitol Hill like Pelosi and Boehner as well as Israel-Firster Eric Cantor are supporting Obama. And most of the countries of the world insist that no decision can be made apart from a UN Security Council vote.

BUT IT ALL TURNS OUT that Kerry’s ‘Munich Moment’ is actually yet another ‘Israel-First Moment’ with Kerry’s Jewish speech writer, Stephen Krupin, a former intern of the pro-Israel think tank, The Solomon Project, penning the bombast.

It’s Jewmerica everybody! It’s the good ‘ol JewSA we’re living in! Who cares if we send our boys off to another war where only the Jews benefit!

But once the Jews BLEED what’s left of the dying empire then the husk of a nation that was once America will be left to wither and die.