Why Israel Fears The Egyptian Crisis

WHY ISRAEL FEARS
THE EGYPTIAN CRISIS 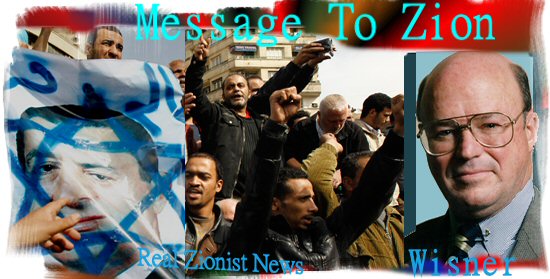 THE ZIONIST MASTERS OF REGIME CHANGE now have the tables turned on them.


An Egyptian reformed government, in which The Muslim Brotherhood would gain greater influence, is giving Tel Aviv heightened fears of an Egyptian Islamist support of Hamas.

For with the US puppet, Hosni Mubarak, (wedded to America’s “special relationship” with Israel), at the end of his rule, a coalition that will doubtless include anti-Zionist Islam spells frightful days ahead for the Zionist state.

As the largest, most popular, and most effective opposition group in Egypt, The Muslim Brotherhood will undoubtedly seek a role in creating a new government…and this frightens both Israel and its prostitute patsy, America.

Mubarak has been an ongoing ally of the Israeli occupation. The joint siege of Gaza is proof of that. The Egyptian people never supported Mubarak’s collusion with Israel in their dual blockade of the helpless Palestinians in Gaza.

Neither did the Egyptian people assent to the peace agreement with Israel in which the Zionists committed themselves to “respect the legitimate rights of the Palestinian people” but never kept their word. Instead, the Egyptians got the scenes of illegal phosphorous bombs rained upon Gaza in Israel’s Operation Cast Lead. 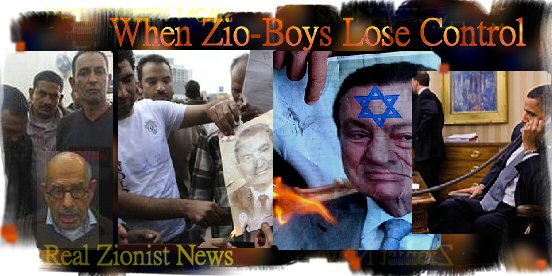 THE MASSES ARE NOW SPEAKING in Egypt and the entire Islamic world is nodding in affirmation. The power of dissent, history has proven, is stronger than guns and force.

It’s only a matter of time before the Arab masses surrounding Israel and inside the Zionist state both in Gaza and the West Bank will have their say—with millions of Muslims supporting and funding them.

Obeying his masters at the Jewish Lobby, Obama is attempting to salvage their puppet-state arrangement with Egypt by sending the Lobby’s “special envoy” — Zionist Jew, Frank Wisner, former Ambassador to India during Clinton’s Kosher Cabinet administration — to prop up a pro-Israel government.

But sooner or later, Washington must realize that it’s backing a criminal state that the entire world now despises due to its genocidal policies.

But even if the Jewish Lobby will not allow captive America to sever its “unbreakable bond” with Israel, the collapse of the US dollar will make that decision for them—the end of their Zionist state…

And: Flotilla Crimes And The Strategic Ally Myth Click Here