The Jews Who Run Wall Street

“Jews And Money - Story Of A Stereotype,” is the title of a new book by Abraham Foxman, director of the Anti Defamation League.

Of course the Christ-hating Jew, Andrew Tisch, attacked Christianity as the origin and perpetrator of stereotyping Jews as greedy money changers.

All this hype behind Foxman’s book is to convince the goyim that “stereotypes” of Jews possessing a disproportionate amount of wealth and control is “false and dangerous.” 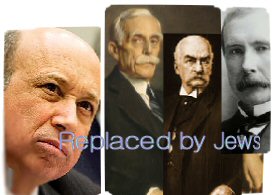 But we who are not swayed by Jewish babble, simply see the facts glaring in our faces which convince even the casual observer that Jews possess an enormous amount of wealth (48% of US Billionaires are Jews) and use it to buy politicians and public opinion.

The serpent’s nest of this many-headed Judaic money-monster is to be found on Wall Street where names like Morgan, Rockefeller, and Mellon are no longer to be found.

This Old World environment of Gentile bankers is now being replaced with a New World Order of Jews with names like Blankfein, Rubin, and Weill.

Wall Street Jews run not only the White House and Congress, but decide where American tax-payers’ money should go: to themselves through bail-outs or to their overseas investments that buttress former American factories now located in China and India.

Weill started his banking career as a Bear Stearns “runner” in 1955. He became president of American Express in 1983 and through acquisitions, created the insurance giant, Travelers Group. 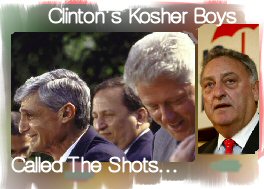 Weill merged Travelers with Citicorp in 1998, when along with Alan Greenspan and Robert Rubin, “convinced” Clinton to repeal the Glass Steagall Act, the legislation that protects against Judaic financial aggression.

Through his strong-arming of the pawn in the White House, Weill was soon tagged as “the banker who bought Bill Clinton and shattered Glass-Steagall.”

Sanford Weill knows just how to use his money to win friends and influence students by throwing his wealth at Cornell University.

Not allowing big money to go unthanked, Cornell rewarded their Jewish benefactor by naming their medical school after him. Showing even further gratitude, the university named Weill as chairman of the board.

In other words, discrediting the “stereotyping” of Jews and money is a fine way of selling books. But we who live in the real world of FACTS and NAMES form our own opinions of WHO has the money and HOW they use it.

Soon Rubin and Friedman shared the chairmanships of Goldman followed by stints as directors of the National Economic Council — with Rubin under Clinton and Friedman under Bush.

Their parallel paths would take them into the upper realms of national politics - demonstrating the fundamental power that Jewish banksters enjoy in America’s political life. 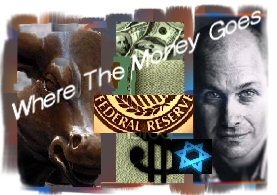 In January 2008, Friedman became chairman of the New York Fed, the branch with a close relationship with Wall Street, deciding to whom tax-payers’ money goes.

While Friedman chaired the New York Fed 2008-2009, he was at the same time on the board of directors at Goldman Sachs.

When finally exposed as a “dual citizen” after being caught buying 50,000 shares of Goldman stock via inside information, Friedman quit the Fed under accusation of “conflict of interests.”

But in 2009, immune to any legal ramifications, (Jews enjoy special juridical status), while serving as chairman of the New York Fed, Friedman also chaired Obama’s Foreign Intelligence Advisory Board.

Jewish stereotypes notwithstanding, we who know the NAMES and EVENTS of the Judaic moneyed elites don’t buy into Jewish whitewashing as Abe Foxman would have us do.

Yes, indeed Mr. Foxman. The Wall Street safe-deposit boxes are brimming with the bucks of Jews who bring their influence to bear in very high places…

And: Jews Wage War On The Middle Class Click Here

And: Goldman Sachs Jews Do Greece - (America Too)… Click Here