Goldman Jews Do Greece (America Too…)

GOLDMAN JEWS DO GREECE
(America Too…)

JEWISH BANKERS ON WALL STREET in league with Zionist Jews operating within high levels of both the Greek government and the EU.

These money lords are using Greece as a “test case” in order to seize the sovereignty of EU members’ fiscal infrastructure — and replace it with a centralized monetary center in Brussels.

Using the manipulative tool of “Finance Capital” to exploit the troubled budgetary policies of Greece, recent news has revealed that the New York Jewish Investment firm, Goldman Sachs, engaged in a controversial “currency swap” with the Greek government in 2002 during Greek Prime Minister Constantine Simitis’ term as head of state.

Simitis, whose real name is Aaron Avouris, a Jew, was the key player along with Lucas Papademos, who was Governor of the Bank of Greece at the time and former senior economist of the Federal Reserve Bank of Boston, in brokering the deal with Goldman Sachs. 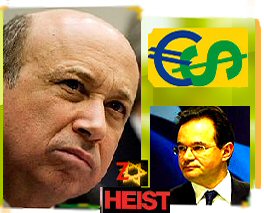 Goldman Sachs was the clear winner in the deal - with Greece being the clear loser. The deal involved a cross-currency swap in which some €10 billion in Greek-debt, issued in dollars and yens to Greece, was swapped for Euro-debt to be repaid in euros, using a “fictional” exchange rate.

Goldman also earned a hefty commission on the trade, charging Greece $300 million as managers of the LOAN and later selling the swap to a Greek bank in 2005.

By using an artificially high exchange rate that didn’t accurately denote the market value of the euro, Goldman Sachs effectively advanced Greece only a €2.8 billion loan, yet on the books, the larger figure of €10 billion was the principal upon which Greece had agreed to repay with interest.

The exchange rate that Goldman Sachs selected for the transaction was determined by the very low level of the euro at the time—trading at around 85 U.S. cents—the Greeks thinking they got the better of the arrangement.

However, once the deal was made, the dollar dropped far lower than the euro, leaving Greece obligated to pay back the LOAN with a strong euro against a weak dollar. With Greece now up to their ears in greater debt, Goldman Sachs is reveling in their $24 million return on the transaction.

While the Jews of Goldman Sachs enjoy huge bonuses, massive taxpayer subsidies, and unrivalled political influence – Greece hangs it head as Goldman’s “useful idiot” by ending up not only as the villain in the piece by losing it EU voting rights and ‘tabbed’ as the gateway to an EU financial dictatorship.

WITH THEIR GENTILE PLANT HENRY PAULSON AT TREASURY, the Jews of Goldman Sachs were preparing to cheat American taxpayers by bailing themselves out ON THEIR OWN and then asking for an ADDITIONAL bailout.

Although the TARP Bill was signed into law on October 3, 2008, delivering 700 billion dollars to wealthy Jewish bankers with Goldman getting $10 billion, the top brass (all Jews) of Goldman Sachs began their own ‘bailout’ as far back as March of 2008.

In little noticed public records filed with the Securities & Exchange Commission — see here and here — top Goldman Sachs’ executives under the direction of John S Weinberg who reported the sales, moved quickly to sell their shares of Goldman stock to unsuspecting investors while the shares were still trading at a high rate in March of 2008.

Indeed, Goldman’s stock was trading around $171 a share by mid March - but with the ‘red flag warnings’ of the imminent Bear Stearns collapse, Goldman Jews knew what was coming down the pike. Thus, Weinberg gave the order to sell: 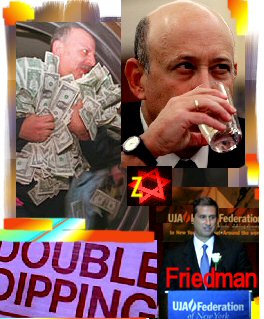 On March 20, 2008 Marc Spilker, Head of Goldman’s Asset Management Division at the time (another abrupt resignation), sold 11,484 Goldman shares at $177.34 each, putting $2 million in Goldman coffers.

When Lehman Brothers filed for bankruptcy on September 15, 2008 along with the coinciding rescue of AIG, Goldman execs renewed their selling flurry: 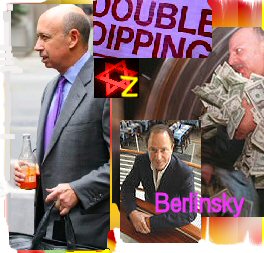 BOTH GREECE AND THE AMERICAN TAX PAYERS ARE THE BIG LOSERS when targeted by the finagling of Zionist Jews in high finance. And somehow the Wall Street Jewish cabal always emerge as victors whenever they exploit the misfortunes and naivete of nations and taxpayers.

Will the people ever catch on to these crafty Jews? Only a great awakening could shine a light of scrutiny on these Wall Street criminals…