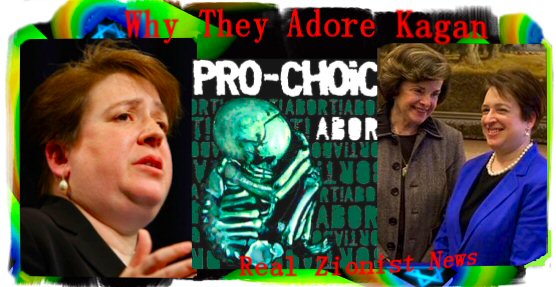 The television ad is sponsored by an affiliation of abortionists, Jews, gays and leftists, posing as a Constitution advocacy group.

Calling themselves, “Coalition for Constitutional Values,” the group is actually on a quest to undermine all that the US Constitution stands for with regard to freedom of speech, the integrity of the family, and the guarding of an American national identity. 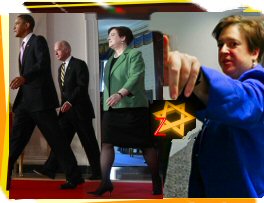 A scan of the various groups who make up the “Coalition” and their statements of support for Kagan’s nomination by Obama, evince an outlook that most Americans eschew.

Beginning with the Alliance For Justice, whose Jewish Director, Nan Aron, “applauds” Obama for his choice of Elena Kagan, this organization is a leftist/feminist organization that promotes women and minorities to hold judicial seats traditionally held by white men. (See Propaganda Picture Here).

The AFJ Director, Nan Aron, is a former attorney with the Jew-funded ACLU and known for her legal positions on gun control, open immigration, and diversity laws in the work place.

And who funds the Alliance For Justice? You guessed it…none other than the billionaire Jew, Gyorgy Schwartz, publicly known as George Soros, who is hell-bent on annihilating a White Christian power bloc in America. View Entire Story Here & Here. 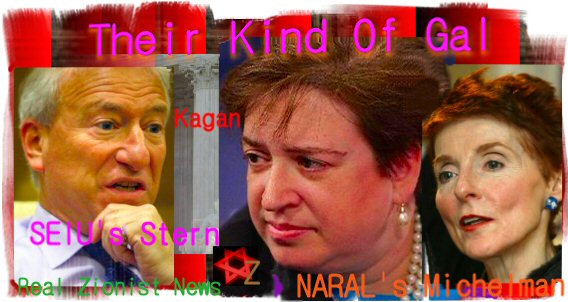 THE ANTI- CONSTITUTION COALITION
FOR KAGAN

CONTINUING WITH THE CAST OF CHARACTERS who make up the Coalition For Constitutional Values, is “NARAL Pro-Choice America,” an abortion advocacy group whose former president is the Jewish-supported, Kate Michelman.

NARAL’s statement endorsing Kagan, published on the Coalition’s Web Site, hails Kagan as a “champion of women’s rights” and applauds “her views on the right to privacy as affirmed in the landmark Roe Vs Wade decision.”

Next on the Coalition’s roster, is a close affiliate of NARAL, The National Council of Jewish Women, whose endorsement of Kagan for Associate Justice of the Supreme Court has obvious Jewish overtones:

“As a law clerk for Judge Abner Mikva, Elena Kagan has a record that reflects the high ideal of equality for all.

The SEIU is known for its former President, the Jew Andy Stern, who has visited Obama more than any other White House visitor. Stern’s connection to Obama is not only for raising $60 million for the presidential campaign, but for his socialist ideology, of which, according to Glenn Beck, Obama shares with Stern.

The question is: Why are abortionists, Jews, gays and leftists, pushing Kagan for Supreme Court? The answer is simple. Because Kagan is also an abortionist, a Jew, a lesbian and a leftist.

But The REAL Question About Elena Kagan Is:

Do we really want another Jew – another woman (this one a lesbian) – another abortionist (in the ‘pedigree’ of the Soviet murderer, Lazar Kaganovich), on the highest judicial bench of our nation?

And: Jews Back Kagan For Supreme Court Click Here

And: The Obama/Soros Plan To Destroy America’ Click Here