Separation Of Church & State Is A Jewish Lie 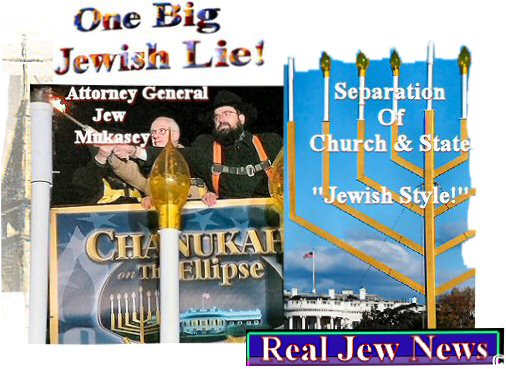 Or Send Your Contribution To:
Brother Nathanael Kapner; PO Box 547; Priest River ID 83856
E-mail: bronathanael@yahoo.com
JEWS TELL US that separation of Church & State is a fundamental Constitutional decree. But they are lying. Here is what the Jews really mean:


— “Though there is nothing in the US Constitution that decrees a “separation of church & state”, because we fear Christianity, we will do all on our power to prevent public expressions of the Christian religion.”

However, when it comes to asserting Judaism, we don’t give a hoot about the myth, “separation of church & state”, thus we will do all in our power to promote public expressions of the Jewish religion. —

JEWS MADE UP THE LIE OF
SEPARATION OF CHURCH & STATE

ALL OF THE ORIGINAL AMERICAN COLONIAL CHARTERS gave reference to the Christian religion as the raison d’etre of the settlements’ purposes. Here is an excerpt from one of the earliest Colonial Charters:

— “We, greatly commending their Desires for the Furtherance of so noble a Work, which may, by the Providence of Almighty God, hereafter tend to the Glory of His Divine Majesty, in propagating the Christian Religion.” —

William Bradford, in 1647, proffered in writing the reason for the pilgrims’ Mayflower voyage to America:

— “An inward zeall they had of propagating the gospell of the kingdom of Christ in those remote parts of the world.” — History of Plimoth Plantation, Governor William Bradford.

The only US document where the phrase: “separation of Church & State” appears, is in Thomas Jefferson’s letter to the Danbury Baptist Association of CT in order to assure them that the Federal government would *never* intrude upon public expressions of Christianity:

— “Believing with you that religion is a matter which lies solely between man & his God, I contemplate that act of the whole American people which declared that their legislature should “make no law prohibiting the free exercise of religion,” thus building a wall of separation between Church & State.” —

See: “The Myth of Separation Of Church & State” Here 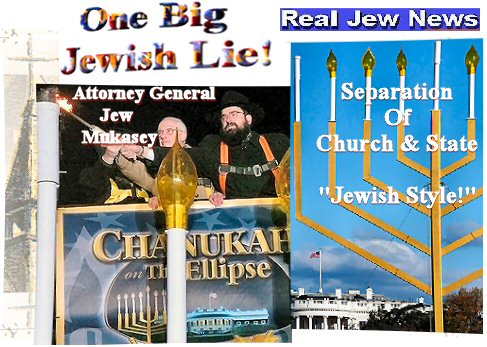 HOW CAN WE STOP THE JEWS FROM JEWIFYING AMERICA?
Here are 3 options:

1) Whenever you see a Chanukah Menorah in a public area, demand that a Nativity Scene be put up next to it.

2) Start putting up Crosses on private properties, both residences and businesses, in order to show the Jews that America is a Christian nation - not a Jewish one.

3) Demand that Jews like Attorney General Michael Mukasey keep his Anti-Christ rabbi friends off of the White House Lawn & out of the Oval Office!

For More See: “The Jewish War On Christmas” Click Here