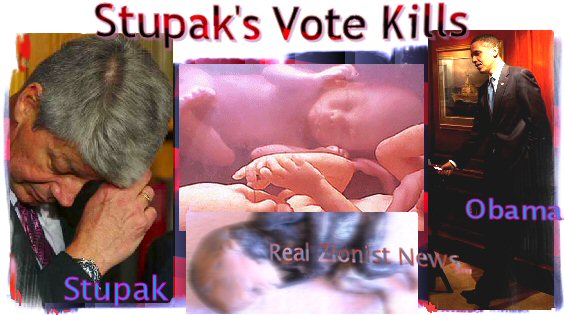 THE BACKROOM DEALS between Bart Stupak and Obama resulted in an unpopular Health Care Bill being rammed down the throats of millions of Americans through a total defiance of the representational process and the US constitution.

Bartering the lives of the unborn for Obama’s grant of $700,000 to erect chain link fences to keep rabbits away at three airports in his Congressional district in Michigan, Stupak has stooped to the lowest level of cut-and-shuffle politics.

Last minute approval for the health care legislation that tipped the scales by a 219-212 vote emerged when “Pro-Life” Stupak and ten other Democrats abandoned their insistence that the bill include language that would prevent federal dollars from covering abortion.

Instead, Stupak and his allies accepted a sham Executive Order—and trashed all the promises of “no compromise” made to their constituents. 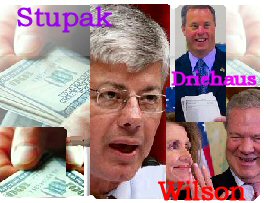 One day after the vote, the “Stupak 11″ released their fiscal year 2011 earmark requests of $429 million GRANTED to each of them. Granting earmark requests was one of the ways Pelosi bribed her colleagues into committing constitutional crime.

After spending months spelling out in detail how the Senate version of health care permitted federal funding of abortion through its failure to expressly prohibit it, Stupak cashed in his principles for an unenforceable executive order that is trumped by the bill that he and his allies voted to pass.

With his vote being the defining moment of his life, Stupak will always be known as an American turncoat who stabbed the Pro-Life Movement in the back. 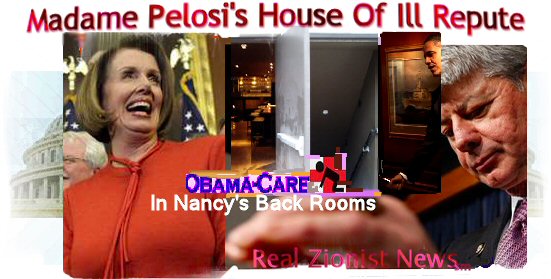 ON MARCH 24 2010, two days after the “historic” travesty of the passage of ObamaCare, Madam Speaker Pelosi made a disturbing promise in an interview with PBS’s Jim Lehrer.

Pelosi proudly announced (with a large bar of soap needed in her lying, fascist mouth) that the methods employed (payoffs, bribes, lies, threats, backroom deals) to force socialized health care on the American people would serve as a “model” for future reforms:

Lehrer: Madam Speaker, do you see the way you did health care reform as a model for enacting major legislation?

Pelosi: I see the way we did health care reform as a model of getting something done for the American people. It is — we reached for bipartisanship. 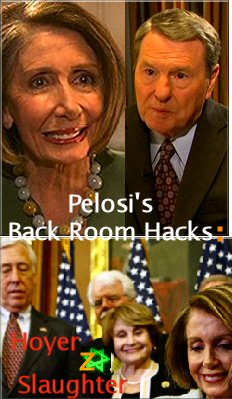 Lehrer: But you had a very thin vote margin with no Republican votes and a sharply divided public. And you still did it.

Pelosi: Right. Well, that’s a tribute to my colleagues, that they had the courage of their convictions, that they believed that this is an historic opportunity to do something great. And if we can’t find common ground that doesn’t mean we don’t go forward.

Lehrer: You said a few days ago, “If the gate is closed, we will go over the fence. If the fence is too high, we will pole-vault in. If that doesn’t work, we will parachute in. But we are going to get health care reform passed.” Is this what you would call the Pelosi way to operate?

Pelosi: Well, nonethe — the point is, I knew that my — I had faith in my colleagues that we would get this job done.

Lehrer: The person who would replace you as speaker if it did become Republican, John Boehner, said this about you — “So, you pass a very unpopular bill. You shove it down the throats of the American people, and you lose your majority. How smart is that?”

Pelosi: What is smart is to do what the American people need. This is historic. View Entire Story Here. 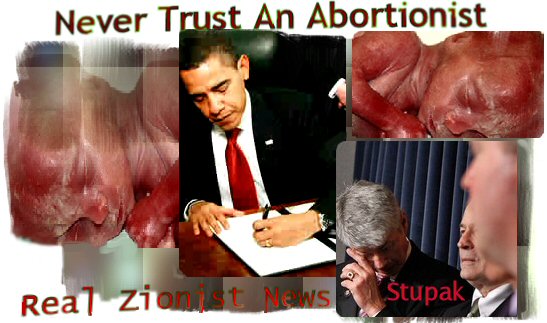 BAD FOR THE UNBORN

Two memos make it clear how Obama’s bill would allow community health care centers to perform abortions with federal money. The first memo is by the Conference of Catholic Bishops. The second memo is by the National Right to Life Committee.

The memos examine the texts of the Nelson and Stupak amendments. Stupak’s amendment stipulates that “No funds authorized or appropriated by this Act” may be used to pay for elective abortions.

These words are missing from Nelson’s amendment to the Senate bill, approved last Sunday by the House. Regardless of the bill’s bookkeeping method to segregate premium dollars from federal subsidies, these regulations do not apply to the $11 billion slated for the health centers under ObamaCare. 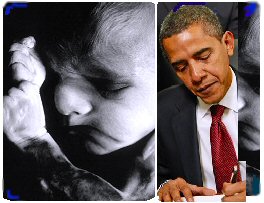 Obama’s bill does an end run around the Hyde amendment, (that prevents Medicaid funding of abortion), by directly appropriating billions of dollars into a new Community Health Center fund rather than through the Health and Human Services Appropriations Bill as it has in the past - of which Bill - the Hyde amendment is attached.

Because the health care reform bill does not include the abortion-ban language proposed by Stupak, the billions appropriated to CHCs, not covered by Hyde, may be used to fund abortions. View Entire Story Here, Here & Here.

OBAMA’S EXECUTIVE ORDER is merely a restatement of the Nelson language in the newly-passed health care bill that allows for federally-funded abortions as long as an accounting method is used to re-assign the funding.

And: The Jews Behind Obama’s Health Care Scheme Click Here

And: Why Obama’s Health Care Plan Can Kill You Click Here