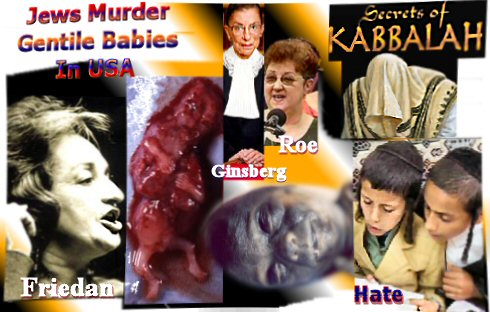 Yes - over a half a million Gentile babies have been murdered by the “Jewish” decision of the Supreme Court Justices in theRoe Vs Wade case. Even today, there is a Jewish Pro-Abortionist feminist on the Supreme Court bench by the name of Ruth Bader Ginsberg.

For it was the Jewish feminists such as Betty Friedan, Susan Sontag (Rosenblatt), and their NOW & NARAL organizations, that pushed for the abortion law. And the National Organization For Women (NOW) is dominated by lesbians. Susan Sontag (Rosenblatt) is herself an admitted lesbian and even brags about having as her lover, the Rothschild heiress, Nicole Stephane Rothschild. It is a known fact that lesbians have a hatred for men and despise their reproductive faculties because it is male dependent.

Both lesbians and Jews don’t care about Gentile babies. According to the Jewish Talmud, Gentiles are nothing more than cattle to be slaughtered. But not very Jewish babies have been murdered by the Jewish abortionists. This is because Jewish women take the pill and most of them get married.

Moses Maimonides is the most respected of all the Jewish Rabbis amongst the Jewish people. Even some “enlightened” Christians have a high regard for this 12th Century rabbi. But what I wish to “enlighten” all Gentiles of is the hatred toward Gentiles that Maimonides harboured:

— “It is the duty of every Jew to exterminate infidels with one’s own hands - infidels such as the pupils of Jesus of Nazareth.” (Maimonides, Book Of Knowledge AKA, The Maimonides Code) —

Many of the murdered babies that the Jewish abortionists treat as objects for the trash can are blacks whom the Jews call “schooks” and “schwartzas.” Maimonides has taught the Jews well on what their attitude should be toward the blacks:

— “Those who are incapable of attaining to supreme religious values include the black coloured people and those who resemble them in their climates. Their nature is like the mute animals. Their level among existing things is below that of a man and above that of a monkey.” (Maimonides, Guide To The Perplexed, Hebrew Version) —

The Jewish Kabbalah is also full of hatred towards the Gentiles: “The Gentiles are to be considered, literally, limbs of Satan. Those few non-satanic individuals among the Gentiles who convert to Judaism are in reality Jewish souls who got lost when Satan violated the Holy Lady. (The female component of the Kabbalistic Godhead).” (Kabbalah: The Zohar) —
See: Jewish History-Jewish Religion, Israel Shahak

Hassidic Jews of the Chabad Movement known as the Lubavitchers, are rabid Gentile-haters. They have a particular bias toward Gentile embryos:

— “All Gentiles are totally Satanic creatures in whom there is absolutely nothing good. Even a Gentile embryo is qualitatively different than a Jewish one. The very existence of the Gentile is non-essential. Whereas the world was created by God solely for the sake of Jews.” (The Hatyana, Fundamental Book of The Chabad Movement) — 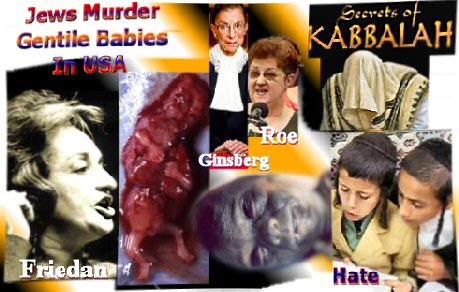 WHAT WAS THE LIE that the Jews used to get the Abortion Law passed? Let’s ask the central person in the Roe Vs Wade case, “Jane Roe,” who in reality is, “Norma McCorvey:”

— “I am now a Christian. I made up the story that I was raped. I admit it now. I was too scared back then. It was one of the most hideous times of my life. I was brought up not to lie and, because of this story, I had to lie all the time. And the depression periods got deeper and longer until the night I cut my wrists.

I was used by pro-abortion attorneys. They only needed a pregnant woman as a prop for their case. They cared not about me but only about legalizing abortion. Even after the case I was never respected – probably because I was not a liberal feminist like them.” —

The Real Jane Roe, Norma McCorvey, has now filed suit to overturn the Supreme Court decision. But the Pro Abortionist Jews, with help from their ally on the Supreme Court bench, Ruth Bader Ginsberg, are fighting to keep the murder of Gentile babies as a national law.

PALESTINIAN BIRTH RATES in Israel are of a major concern for Prime Minister Ehud Olmert. In a recent interview, Olmert observed that “unless there are two separate states, a Palestinian and a Jewish, demographics will prove the Arab birth rate to overtake the Israelis by 3 to 1.” But at the same time, American Jews clamour for a single Jewish state while continuing their murder of Gentile babies!

Such a murderous policy is implicit in Israeli politics. For during the Lebanese invasion by the Israelis, the Lubavitchers of the Chabad Movement circulated the anti-Gentile texts of their Hatyana handbook in order to induce military doctors and nurses to withhold medical help to the ‘Gentile-wounded.’
See: Jewish History-Jewish Religion, Israel Shahak

JEWS HAVE COME full circle in destroying American society. Something drastic must be done to stop these Anti-Christian Jews. But what can be done?

We must tell the Jews, “Leave us alone! Go and practice your false, racist religion behind your closed doors, and keep your hatred of all the rest of mankind to yourselves!

I predict a coming backlash against the Jews. Historical precedent calls for it. But I will be clear of the blood of the Jews. For I, Brother Nathanael Kapner, a former Jew, now an Orthodox Christian, have given them fair warning.