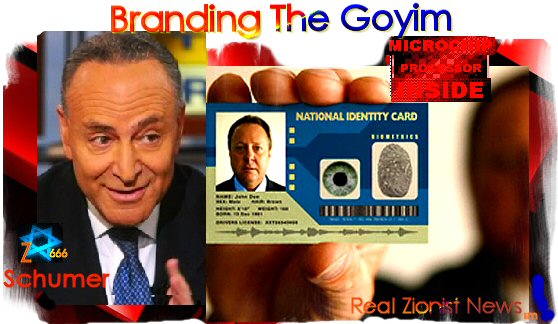 BEHIND THE FACADE of a new Immigration Bill to prevent employers from hiring illegal immigrants, Zionist Jew, Senator Chuck Schumer (D-NY), is pushing a National “biometric” ID Card that all American workers will be required to carry on their person.

Under Schumer’s Bill, all legal US potential employees will be issued an ID card with embedded information such as — retina and fingerprint data; credit and criminal histories; DNA sequences; social profiling; and medical history — ALL linked to a central database.

Schumer himself is advocating the use of embedded “vein scans” on the ID card, a prelude to the New Testament’s prediction of the “mark of the beast.” View Vein Scans Here, Here, & Here. 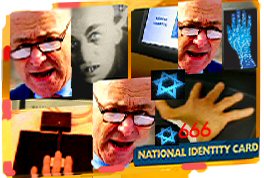 Zionist Jew Schumer, Chairman of the Senate Immigration Subcommittee (why do Jews hold all the chairmanships?) (why does Schumer serve as Chairman on so many committees?) is also promoting the use of “scanners” to be installed at all businesses to distinguish between eligible and ineligible workers.

“Smaller employers,” Schumer says, “could take their applicants to a government office like the Department of Motor Vehicles and have their hands scanned there.”

CIVIL RIGHTS GROUPS, such as Cato.org, are concerned that the National ID cards would eventually spill over to voting rights, police requests for identification, travel, access to government buildings, financial services, housing, medical care, prescriptions, and to every aspect of American life that requires - or will begin requiring - identification.

Privacy advocates warn that the ID cards will evolve into including additional microchips that allow the government to track the movements of citizens just as it tracks runaway dogs. View Entire Story Here, Here & Here.

Although Republican Senator Lindsey Graham is being touted by the Jew-owned press as the initiator of the National ID card, it is in fact Zionist Jew Schumer, through his Jewish financial enablers, who is leading the charge to “brand” the goyim masses. Graham is being used by the Jews as a Gentile “front man” to enlist Republican support for their Zionist “bipartisan” National ID agenda. 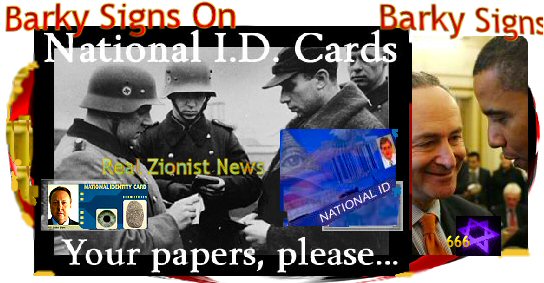 UPON MEETING WITH SCHUMER and his bipartisan patsy, Senator Lindsey Graham, on March 11, Obama “vowed” to continue partnering with the senatorial traitors in support of their so-called, “comprehensive” immigration reform.

Licking the behinds of his Zionist Jew masters who dictate both domestic and foreign policy to their White House puppets, Obama bent lower than his predecessors in pleasing the filthy hands that feed him and paved the way for the “branding” of the goyim:

“I met with Senators Schumer and Graham and was pleased to learn of their progress in forging a proposal to fix our broken immigration system.

I look forward to reviewing their promising framework. Every American should applaud their efforts to reach across party lines and find commonsense answers to one of our most vexing problems.” View Entire Story Here.

Obama then polished off his behind-licking job to the Zionists by promising to “partner” with community leaders. (Read: Jewish Lobbyists.)

THE “COMMUNITY LEADERS” who sponsor and have kept Schumer in office since 1998, are a cadre of Zionist-Jewish bankers, Securities & Investment moguls, and mega law firms. These include: Citibank; Credit Suisse Group; Weitz & Luxenberg; and Kasowitz & Benson. View Entire Story Here & Here.

The powerful Jewish Lobby AIPAC also threw in their billions of dollars in keeping Schumer — an AIPAC “member” — on their active agents list. Zionist sissy, Lindsey Graham, knowing which side his bagels are cream-cheesed on, (Jews are putting many homosexuals in Congress these days), is also an AIPAC tool. 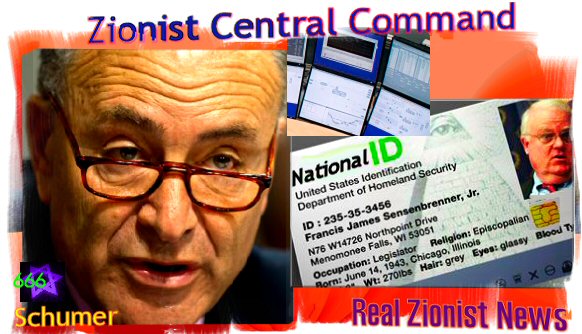 BY NARROWING CONTROL into one central entity, Jewry’s ability to manipulate the masses is guaranteed.

A central data base storing private information on all US citizens offers the already powerful Zionist-Jewish bloc the opportunity to determine the fates of targeted individuals identified as “Anti-Semites” and “extremists.” US Homeland Security has already pinpointed “Anti-Semites” as potential threats to national security. 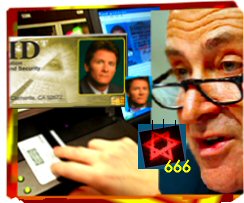 WITH ZIONIST JEW SCHUMER ushering in a National ID card through the back door of immigration reform, the all powerful Zionist bloc with their adjuncts in the Jew-owned press and media will use sensitive information on “Anti-Semites” and “extremists” to destroy their reputations and sabotage their careers.

Knowledge of US citizens’ automotive & air travels, hotel bookings, medical & prescription information, habits & purchasing history, WILL BE USED by the Jews to discredit ALL critics of Jewry’s criminal acts.

Schumer is just their man to bring it all about. With his voting record on Gun Control, Pro Choice abortion funding, increased militarization for Israel, same-sex marriages, and enhanced powers for US Homeland Security, Schumer prepares the way for Jewry’s ultimate goal of universal domination of the dumbed-down, ID’ed, and passive Gentiles…