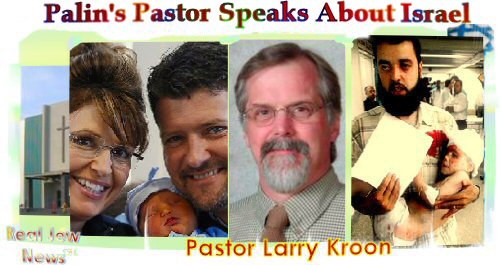 I called Pastor Larry Kroon around 3 PM Mountain Time on today’s date, September 2 2008. I introduced myself to him as a “freelance reporter” for Jewish daily news. During our talk I told him that I was a former Jew and was now with the Russian Orthodox Church.

Pastor Larry Kroon described Wasilla Bible Church as “a Church that teaches that the Bible is the Word of God and calls upon its members to conduct their lives in accordance with it.” Pastor Kroon added that he was the pastor of a “non denominational” Church & that “between 800 to 1000 people attend Wasilla Bible Church on any given Sunday.

Here’s how our conversation went:

Brother Nathanael Kapner: “Do you support the current State of Israel?”

Pastor Larry Kroon: “I believe that God has a special plan for the Jews. However, I cannot say whether or not the current State of Israel is part of that plan.”

Brother Nathanael: “So you don’t view the current State of Israel has being a fulfillment of Biblical prophecy?”

Pastor Larry Kroon: “There are specific prophecies in the Old Testament that predict the coming of the Lord Jesus Christ. But whether or not the current State of Israel is a fulfillment of Old Testament prophecies I cannot affirm.”

Brother Nathanael: “What do you mean when you say that God has a special plan for the Jews?”

Pastor Larry Kroon: “The Bible teaches that ‘all peoples, tongues, and nations, shall be worshippers of the Lord Jesus Christ.’ Jews are included in this purview.”

Brother Nathanael: “Do you mean then that God doesn’t have some unique plan for the Jews?”

Pastor Larry Kroon: “The fact that Jews have been preserved over the centuries shows that God has a plan for them. That plan, as I understand Scriptures, is that they also are included in all peoples, tongues, and nations, who will embrace Jesus Christ.”

Brother Nathanael: “Many evangelicals say that the “144,000 of all the tribes of Israel” as mentioned in the book of Revelations, refers to the Jews who will be “saved” at the end of time. Do you teach this?”

Pastor Larry Kroon: “The book of Revelations has much imagery that is symbolic and could be understood figuratively. I have no definite answer as to whether the “144,000″ refers to Jews specifically.

“But let me say this. What is more easily understood are the predictions that Jesus Christ is the Messiah and that those Old Testament predictions are clarified for us in the New Testament.”

Brother Nathanael: “How do you feel about the violent attacks on Palestinian civilians in the Gaza Strip by the Israelis?”

Pastor Larry Kroon: “We must look at all of these kinds of incidents as they occur not only in Israel but in other parts of the world. We must look upon these incidents on a case by case basis.”

Brother Nathanael: “I noticed on your “Sermons” section of Wasilla Bible Church’s Web Site, that on August 17 2008, the Director of Jews For Jesus, David Brickner, spoke at your Church giving a sermon entitled, “The Jerusalem Dilemna.” I know that Jews for Jesus is an Evangelical organization which is very Pro Israel. Do you agree with their stand that the current State of Israel is legitimate in terms of what the Bible teaches?”

Pastor Larry Kroon: “As I already mentioned, we have our own views on Biblical prophecy as it pertains to the current State of Israel. This may differ from the views which Jews for Jesus has.”

Brother Nathanael: “Before I called you I spoke with the secretary of Jeneau Christian Center located in Alaska’s capital. She told me that there was a Christians United For Israel Conference in 2007 at the Church. She said that Governor Palin gave a speech that was very “Pro Israel.” Does then Sarah Palin take a “Pro Israel” stand?”

Pastor Larry Kroon: “I have never heard Governor Palin make a statement on the subject. As for me, I am a ‘local pastor.’ I emphasize to the flock that the teachings of the Lord Jesus Christ are to be lived out in our day to day lives. And all people, including the Jews, are called to live their lives according to Christ’s teachings.”

I Take Encouragement That The One Who Sits
Under Pastor Larry Kroon’s Teachings, Namely, Sarah Palin, Will Also “Hesitate”
To Support The Current Zionist State Of Israel.