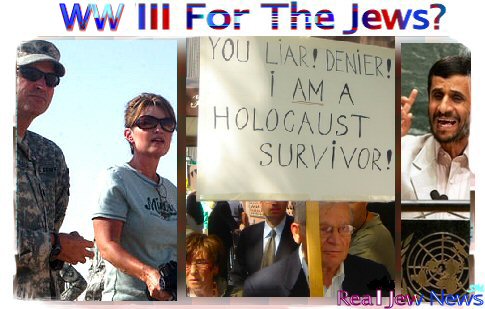 Source: Palin’s ‘He Must Be Stopped’ Speech Here.
GOVERNOR SARAH PALIN IS quickly, lamentably, emerging as a resolute and dangerous Zionist shill (or dupe) — if not an outright rabid war monger pushing for WW III.

In a speech prepared for the Jewish sponsored Anti-Iran rally during Ahmadinejad’s visit to the UN on September 22 2208, Palin promised that she would do everything possible to “stop” the danger of a nuclear Iran — even beyond sanctions.

Though Palin’s scheduled appearance was cancelled due to concerns to hold a “bi-partisan” rally, the text of Palin’s speech has been made available by the Jewish controlled media. Here is Palin’s speech with its main points left intact. (Brief comments are included)

PALIN’S ‘HE MUST BE STOPPED’ SPEECH

“I am honored to be with you all united in a single voice of outrage.

Tomorrow, Iran’s President, Mahmoud Ahmadinejad, will come to New York — to the heart of what he calls the Great Satan — and will speak freely in this country whose demise he has called for. [Thou shalt not lie, Sarah.]

Underneath all of Ahmadinejad’s rhetoric is an agenda that threatens all who seek a safer world. We gather today to highlight the Iranian dictator’s intentions and to call for action to thwart him.

Ahmadinejad denies that the Holocaust ever took place. He dreams of being an agent in a “Final Solution” — the elimination of the Jewish people. He has called Israel a “stinking corpse.” [It’s all about the Jews, after all, eh Sarah?]

Such talk cannot be dismissed as the ravings of a madman — not when Iran just this summer tested long-range Shahab-3 missiles capable of striking Tel Aviv, and not when Iran sponsors terrorists that kill innocent people around the world. [Just like Saddam, huh Sarah? - And by the way, take the log out of America’s eye first before you talk the speck out of another’s…]

Iran wants nuclear weapons. The UN has demanded that Iran suspend its illegal nuclear enrichment activities. It has levied three rounds of sanctions. How has Ahmadinejad responded? With the declaration that the “Iranian nation would not retreat one iota” from its nuclear program. [But how has America responded to the world’s outrage of millions of civilians being murdered by the US in Iraq & Afghanistan? Huh, Sarah dear?]

So, what should we do about this threat? First, we must succeed in Iraq. If we fail there, it will jeopardize the democracy the Iraqis have worked so hard to build. [Yeah, right].

Iran threatens the entire world. It is the number 1 state sponsor of terrorism. [Most of the world thinks America is.]

It sponsors the world’s most vicious terrorist groups, Hamas and Hezbollah. [Who sponsors America’s terrorism? Bush - next, you & McCain?] Together, Iran and its terrorists are responsible for the deaths of Americans in Lebanon in the 1980s, in Saudi Arabia in the 1990s, and in Iraq today. [Prove it, Sarah!]

They have persecuted countless people simply because they are Jewish. Iran is responsible for attacks not only on Israelis, but on Jews living as far away as Argentina. Anti-Semitism and Holocaust denial are part of Iran’s official ideology [Oh, so now we see who’s writing your speeches…]

Earlier this year, Senator Clinton argued that part of our response to Iran’s threat must include stronger sanctions. John McCain and I could not agree more. [You have to agree with McCain or you could lose your paycheck though you have already lost your soul.]

This is an issue that should unite all Americans. Iran should not be allowed to acquire nuclear weapons. Period. And in a single voice, we must be loud enough for the whole world to hear: Stop Iran! [Oh shut up you Jewish-bought war monger.]

Senator McCain has made a commitment that I strongly endorse: Never again will we risk another Holocaust. And this is not a request to Israel’s enemies. This is a promise that the United States and Israel will honor against any enemy who cares to test us. And this is my promise too! [It’s all about Israel isn’t it, Sarah? And not about America.]

Another War Mongering Speech Written By AIPAC For Their Zionist Shill, Sarah Palin!
But Please Excuse Me, Sarah - -
I Think I Am Going To Throw Up …


And: “McCain Panders To The Israel Lobby” Click Here