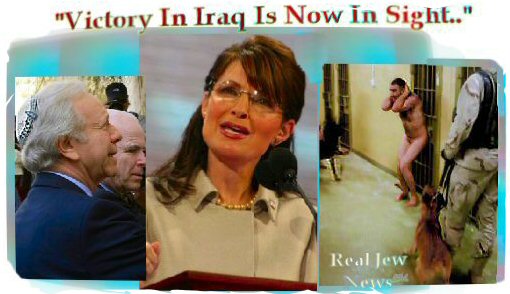 Or Send Your Contribution To:
Brother Nathanael Kapner; PO Box 547; Priest River ID 83856
E-mail: bronathanael@yahoo.com
SOMETIMES A MAN gets tired of hearing the same old thing over and over.


And Sarah Palin with her Acceptance Speech at the Republican National Convention on September 3 2008 has made this man want to find some island to escape to.

But there is no escape from Zionist war shouts. The fact is, Sarah Palin’s boss, John McCain, has a crew of Jews all around him who paved the way to his nomination.

A few phrases jumped out at me in Palin’s speech:

“Senator McCain would rather lose an election than lose a war.”

“Senator McCain refuses to break faith with our troops in Iraq who now have brought victory within sight.”

“Obama wants to reduce the strength of America in a dangerous world.”

“Thank you and God bless America.”

WAS THE SCRIPT FOR THIS SPEECH written by McCain’s ‘Jewish crew?’ Palin then had no choice but to give the speech as scripted for her. Does she believe it? Will they eventually let her be herself? Will she go off the reservation and sing a different tune?

We can only hope that Palin does go off the reservation over the course of the next number of weeks and begin to be SARAH PALIN instead of the RNP Zionist mouthpiece.