Edgar Degas - An ‘Anti Semite’ For Our Times

– EDGAR DEGAS –
AN ‘ANTI-SEMITE’ FOR OUR TIMES

EDGAR DEGAS WAS BORN OF ARISTOCRATIC BANKERS in Paris on July 19, 1834. Until his death in 1917, Degas cherished an attachment to his grandfather, Hilaire De Gas, a well-to-do banker of the French aristocracy.

Developing his artistic talent when 18 years old as a copyist at the Louvre in Paris, Degas began getting recognition as a serious painter in 1868 with his enigmatic ‘psychological’ portrait, A Woman Seated Beside a Vase of Flowers.

Critics named Degas the leading figure among the new group, later known as the Impressionists, conferring high praise on his work, The Dancing Class, another enigmatic work using a small mirror, a strange hanging wall painting, and the figure of an ‘out-of-place’ Jewish violinist. View Enlarged Image Here.

From this point on, Degas was acclaimed for his unique artistic technique that evoked a sharp discrepancy between figure and setting.

A crystallizing event in the life of Degas occurred in the autumn of 1897 in which the artist broke off his relations with the Jew, Pissarro, who was at odds with Degas. This event, known as The Dreyfus Affair, in which Jewish artillery captain Alfred Dreyfus was accused of selling military secrets to Germans, prompted Degas to declare himself an ‘anti-Dreyfusard.’ Henceforth, Degas was scorned by prominent French Jews as an ‘anti-Semite.’ 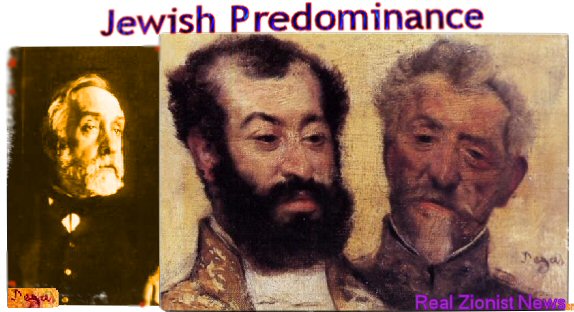 DEGAS & THE RISE OF JEWISH POWER

THE ‘ANTI-SEMITIC’ ATTITUDE OF EDGAR DEGAS towards French Jewry began to overtly show itself in his 1871 painting, General Mellinet and Chief Rabbi Astruc.

In his double portrait portraying a rabbi as not only being the equal of a Parisian general, but possessing an insolent predominance over the high ranking military officer, Degas displayed the growing sentiment that Jews were emerging as a dangerous influence in French political life. Although the title of the painting confers preeminence to the general, the rabbi is clearly in charge. 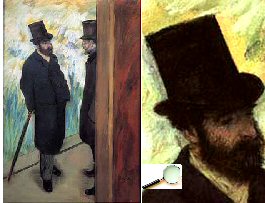 Degas’ dismay at the rise of Jewish power in France gave increased expression to his artistic voice as evinced in his 1879 painting of the Jewish opera librettist, Ludovic Halevy, “Portrait of Friends in the Wings.” In his depiction of Halevy conversing backstage at the opera with Albert Boulanger-Cave, a wealthy Gentile arts patron, Degas’ use of the discrepancy between figure and setting comes to the fore.

Drawing upon French opinion that “Jews did not belong in France and were sucking the life out of the country,” (Sound familiar?), Degas created a portrait in which Halevy is out of place in French public life, as here, the French opera.

In contrast to the bright, colorful backdrop, Halevy appears isolated in his own gloomy set, his haggard expression incongruous with the rest of the painting, his mere presence darkening the cheerful scene. Degas used Halevy’s mood, complete with the ’stereotyped’ Jewish features of hooked nose and full beard, to demonstrate that Halevy, ‘the Jew,’ was an alien in the cultural life of France.

Degas’ Attitude Toward French Jewry reached its artistic climax in his 1879 painting of Jewish banker Ernest May, “At the Stock Exchange.” Degas shows May as a hook-nosed Jew with bulging eyes and lips - an artistic ‘mark’ of the Jew’s alien status. The scene incorporates the reality of Jewish financial hegemony, well known to Degas with the emergence of the Rothschilds as an economic force in France and throughout Europe.

Degas paints May’s head sharply titled toward a Gentile underling, who appears to be whispering something in his ear, which Degas deliberately emphasizes. This creates the impression that the observer is spying on the two men while they share a secret stock tip. With viewers left outside as a Jewish banker receives insider trading information, Degas shows that the French public is being betrayed by Jewish financial machinations. View Enlarged Image Here. 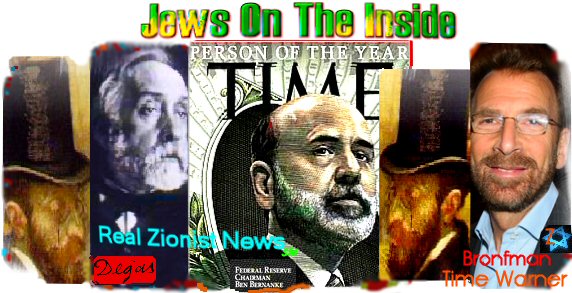 BRINGING IT ALL BACK HOME

AS AN ‘ANTI-SEMITE’ FOR OUR TIMES, Edgar Degas foreshadowed the present Jewish banking hegemony and secret dealings now occurring at the Jewish-owned Federal Reserve Bank in America. (It is NOT Federal/It has NO Reserves/It is yet ANOTHER Jewish Lie.)

The Federal Reserve, led by the Jew Ben Shalom Bernanke and his Jewish adviser, Alan Greenspan, is currently appealing a judge’s order requiring the privately-owned Jewish banking consortium to identify the financial institutions (Jewish bankers, that is) that benefited from its emergency loans. Since the Jews own the courts as they do every American institution, the Fed’s appeal will doubtless be upheld.

Bernanke refuses to disclose the $2 Trillion loan amounts given to the Jewish banks participating in the TARP Bank-Bailout deal, saying that doing so would “endanger private banking interests.” The most likely recipients of stores of US taxpayer dollars are the Jewish banks: Goldman Sachs/Lloyd Blankfein CEO; Morgan Stanley/James Gorman CEO; Citigroup/Robert Rubin 2008 Senior Adviser; and AIG/Harvey Golub, Chairman. 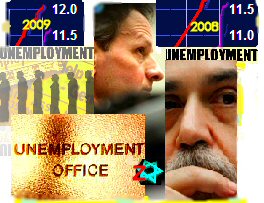 Working closely with Bernanke is the Fed’s own man at Treasury, Timothy Geithner, former chief of the NY branch of the Federal Reserve. As past president of the NY Federal Reserve, which “maintains the nation’s payment systems,” Geithner knows where the bodies are buried and to whom the TARP dollars went. But Timmy ain’t telling.

On December 9, 2009, Bernanke addressed many of his fellow Zionist Jews at the Economic Club of Washington. (Lots of Jews on the Membership List.) Telling his compatriots that the “economic recovery is in its early stages,” Bernanke seems to be ignoring the 20 million GENTILE Americans who are out of work and cannot be convinced that a “recovery” is underway. In fact, 85,000 jobs were lost in December 2009.

Perhaps another ‘anti-Semite’ like Edgar Degas will arise, exposing the Jews for their lies and for keeping the Gentiles outside of their secret dealings. Or, perhaps he has already come. But dumbed down Americans no longer have eyes to see and ears to hear…

And: Jewish Money-Lender Bernanke Should Be Fired Click Here