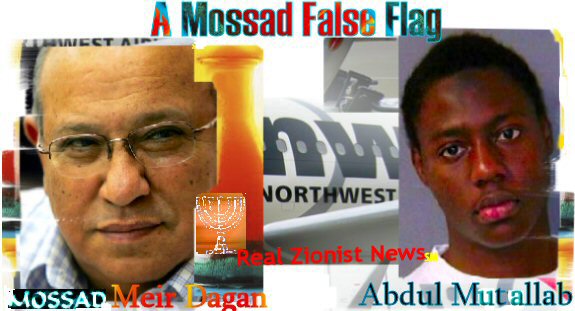 THE FAILED ‘TERRORIST’ ATTEMPT on Christmas day 2009 by Omar Farouk Abdul Mutallab on Northwest Airlines from Amsterdam to Detroit was a singular victory for the Zionist/Military Complex which rules the White House and Capitol Hill.

Working in close connection with the Pentagon and the CIA - the Israel Defense Force (IDF) and its intelligence branch, the Mossad, have set their sights on a new Middle East target, the nation of Yemen which borders oil-rich Saudi Arabia.

Yemen is of particular interest to the Zionist/Military Complex as both China, a trading partner with Yemen, and Russia, now exporting weapons to Yemen, are gaining greater influence in the area. (Obama with Nobel Peace Prize in hand, bombed and killed 120 civilians in Yemen on December 16, 2009.) View Entire Story Here, Here & Here. 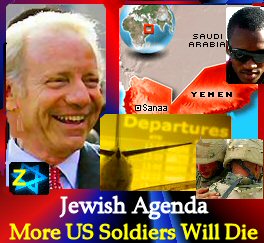 With reports that Mutallab ‘admitted’ to the FBI that he received his training in Yemen by Al Qaida, the Detroit plane incident provides the justification the Zionists need to engage in “preemptive strikes” against Yemenite radicals.

Only two days after the “Christmas Day Terror Attack,” (as the Jewish-occupied press promotes it), Talmudic Jew, Senator Joseph Lieberman, foremost champion of the Iraq War, told Fox News that the “US must pre-emptively act in Yemen.” How convenient for the Zionist Jews who love to send American Gentile kids to die for their causes.

Thus, in his attempt to detonate an improvised chemical mixture concocted in his underwear aboard the Detroit-bound flight, the Nigerian 23 year old Muslim ‘terrorist’ Abdul Mutallab, fulfilled his role as a Mossad plant and patsy.

The incident also serves to catapult Zionist Jews and their militarist dependents to greater heights of power over US citizens & domestic policy: -1- Deployment of Full Body Scanners at Airports -2- Retention of the US Patriot Act Surveillance Provisions -3- Profiling of ‘Extremists’ and ‘Dissenters’ -4- Renewal of the War On Terror by Obama -5- Increased Power of Homeland Security and the Jews in Congress Who Run It -666- Conditioning of the Masses to Passively Accept ‘Big Brother/Anti Christ’ Intrusions.

THE JEWISH CONTROLLED MEDIA immediately began preempting evidence indicating that Mutallab was a witting patsy of a larger plot planned by the Mossad and its associates at the CIA and India’s intelligence agency, RAW.

Hundreds of news stories reporting “intelligence failures” and Obama calling in Intel chiefs for a “failure review” with calls for “heightened security” have dominated headlines.

And, of course, we are being told that Al Qaida, that bogeyman amorphous enemy of American TV watchers, is claiming responsibility for the attack - complete with Obama vowing to use “every element” in the US arsenal to seek and destroy Al Qaida in Yemen and all across the globe.

Billed as the “Christmas Day Terror Attack” and the “Christmas Bomb Plot”, the Jewish-occupied press would have us believe that a revival of the War on Terror must come on the heels of an amateurish chemistry experiment made in a man’s underwear on an airplane seat. (Slightly singed underwear creating a smoky mist and hysterical screams from Jewish women will bring us even more global misery and US soldiers’ deaths.)

The Zionist-Jewish propaganda masters have succeeded once again in preventing US citizens from realizing that yet another false flag terror operation perpetrated by the Mossad and their associates has occurred on American soil.

BY ALL INDICATIONS, the British educated Omar Farouk Abdul Mutallab, turned radical Muslim, son of a wealthy Nigerian banker, was an easy mark for Mossad operatives.

If indeed Mutallab was an ‘Al-Qaida agent’ as propagandized by the Jewish-occupied press, how is it that Mutallab was allowed to board the plane despite his father’s warnings to officials? – That his ‘bomb’ aborted in his underwear? – That he delayed to detonate his chemical pudding until the plane ‘prepared to land?’ – That he “seemed out of it…staring into nothing” and surrendered himself without a struggle to a video producer who ‘grabbed’ him? – That he did not yell out, ‘Allah is Great!’ to his captors? – And that he sang like a canary to the FBI after being apprehended? View FBI Charges Against Mutallab Here.

AND WHO WAS THE WELL-DRESSED SPONSOR from India who acted on behalf of young Mutallab with his multi-entrance passport at the Amsterdam airport?

According to the eyewitness testimonies of Michigan attorneys Kurt and Lori Haskell, a well-dressed Indian man arranged for Mutallab as a “Sudanese refugee” to board Northwest Flight 253 without showing his passport to security. (ICTS, an Israeli Security Firm with intimate ties to the Mossad, provides the security controls at Schiphol airport in Amsterdam.) View The Wayne Madsen Report Here & Here. (Non-Subscribers View Here).

The Haskells emphasize that it was not an issue of whether Mutallab had in his possession a passport or not - but rather that he was allowed to pass through security without presenting it. Kurt Haskell said later that because every passport has a bar code with a profile of the passport holder, this would have revealed damning evidence against Mutallab.

Haskell and his wife originally reported this to CBS News but it is now being suppressed. In Zionist-Jewish fashion, CBS is now claiming that Mutallab did have a passport, which is not the issue. Further exposure of the Haskells’ testimony is now on total blackout by the Jews who own the press and media. View Haskells’ Entire Testimony Here.

PREPARING THE MASSES FOR BIG BROTHER

TALMUDIC JEW SENATOR JOSEPH LIEBERMAN is now calling for compulsory Full Body Scanners at all US airports. If Lieberman has his way, (Jews on Capitol Hill always have their way), innocent Americans treated as SUSPECTS by the Zionist rulers in Washington will be subject to a virtual “strip search” every time they fly.

In an interview with Fox News on September 27, 2009, Lieberman, who chairs the Senate Homeland Security Committee, (why do Jews always chair Congressional committees?), defended the “strip searches” and disparaged American people’s concern about their privacy. “Security overrules privacy concerns,” Lieberman said, “these concerns are frankly, unfounded.”

Not to be left out of Jewish control over the “goyim,” former Homeland Security Chief, Michael Chertoff, (also a Talmudic Jew), echoes Lieberman’s demand for Full Body Scanners. In an interview with NPR Radio on December 29, 2009, not only did Chertoff emphasize the need for scanners, but admitted (lots of stuttering here) that as a “consultant” for the manufacturers of the devices, he has a financial interest in seeing widespread installations. View Entire Transcript Here.

Both Lieberman and Chertoff represent the quest of American Jewry to “strip” US citizens of both their clothes and freedoms. Standing naked before the Jews who rule our nation in order to enjoy the privilege of flying, is soon to be the fate of all travelers. What’s next as terrorist suspects are looked for under every American rock? The privilege to buy and sell, that’s what’s next.

This privilege will be granted only to those who have lasered on their foreheads, the mark of the beast. Big Brother, that is, the Anti-Christ, is on his way. And he will be a Jew…