The Jewish Conspiracy Behind The 1965 Open Immigration Law!

The Jewish Conspiracy Behind The 1965 Open Immigration

Jew News Of The Day! 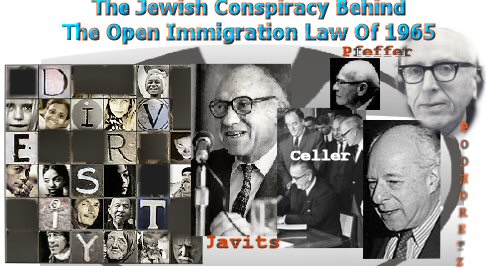 THE JEWISH CONSPIRACY BEHIND THE 1965 OPEN IMMIGRATION LAW

THE DEATH OF AMERICA was enacted in 1965 with the signing of the Open Immigration Law Of 1965.

While serving Jewish interests, the Open Immigration Law Of 1965 was the beginning of America’s death as a unified nation. Jews were behind the law, promoting, lobbying, and “bribing” the law into existence with the fanaticism equalling the most dedicated Muslim terrorist.

Jews have continually evinced hostility toward American Christian culture in their aggressive efforts to change it. The Open Immigration Law Of 1965 is a prime example of that hostility.

Jews are a paranoid people. Wherever the Jews go they fear Anti-Semitism. (Jews have a guilt complex - and for good reason.) Jews fear a homogenous Christian culture of which they would never ascend to influential positions. Rather, in a homogenous Christian culture, Jews are looked upon, (and rightly so), as “Christ-killers.” This is why the Jews tried to get Mel Gibson’s movie, The Passion of Jesus Christ, removed from the silver screen.

A typical example of what characterizes the Jewish push for open immigration can be seen in the following 1948 quote by David Petegorsky, former Director of the AJCongress:

—— “Jewish survival can only take place within the framework of a progressive and expanding democratic society, which through its institutions and public policies gives expression to the concept of cultural pluralism.” ——

Here Are The Names Of The Jews Behind The Open Immigraton Law of 1965:

* Senator Jacob Javits played a prominent role in the Senate hearings on the 1965 bill. Javits authored an article entitled ‘Let’s open the gates’ that proposed immigration levels of 500,000 per year for 20 years with no restrictions on national origin.

* Congressman Emanuel Celler, who fought for unrestricted immigration for over 40 years in the House of Representatives, introduced similar legislation resulting in the “Cellar-Hart Immigration Bill,” the precursor to the fatal bill of 1965.

* Jewish organizations such as the American Jewish Congress, The Jewish Federation, the ACLU, and the B’nai B’rith, (there is no end to their organizations), filed briefs in support of open immigration before the Senate Subcommittee in the early sixties leading up to the passing of the 1965 law. 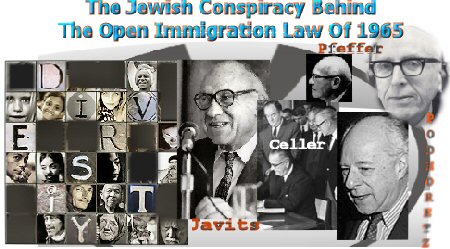 THE 1965 OPEN IMMIGRATION LAW IS PRESENTLY fulfilling the aims of the Jewish conspiracy as seen in its effects. The U.S. Census Bureau projects that by the year 2050, European-derived peoples will no longer be a majority of the population of America due to the massive influx of immigrants since the signing of the bill in 1965.

Most of these immigrants come from Third World Nations whose customs, religions, and culture are far removed from anything remotely resembling Christianity. Within the context of a Jewish-informed “multicultural America,” these immigrants are encouraged by the Jews to retain their own languages, customs, and religions.

The Jews have also given these immigrants a moral mandate to expand both demographically and politically. And expand they will and do! But any attempts by European-derived peoples to retain demographic, political, and cultural control in America are represented by the Jews as being ‘racist’ and ‘immoral.’

THE JEWS ARE GUILTY of the ruination of America. What can we do to stop them even now before the final sliciing of their knives into the effecting of the circumcision of our nation?

is for each and every American to pray for the re-emergence of a Christian America. There is no in between. We must make the best of a bad situation. Let us then all make a commitment to Jesus Christ and regular Church attendance.

Then and only then can we be “more than conquerors through Him who loves us.” And who will we the conquerors vanquish? The enemies of our Lord, the Jews!
–
Brother Nathanael…Street Evangelist!