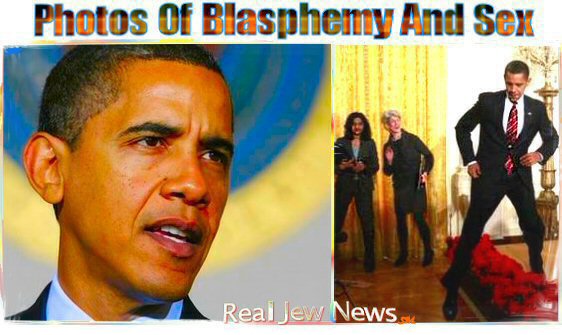 2 Staged Photos Presenting A Subliminal Message
Left Photo: Presents A ‘Worship-Deserving’ Obama With Halo
Formed Around His Head From The Presidential Seal.

Right Photo: Presents Obama As A ‘Stud’ Straddling A Prone Flower Bed
With Two White Women, (One With Her Legs Apart),
Attracted By The Sexual Lure Of The Obama Stud. 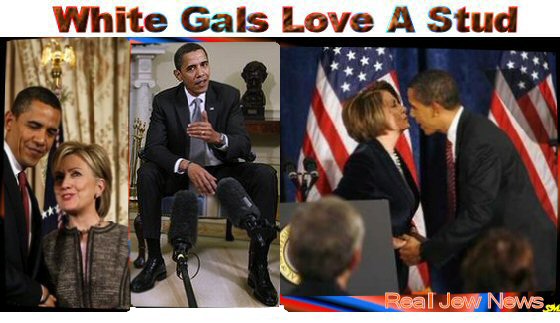 Center: A Lewd Obama Spreads His Legs & Dangles His Hand Over His Crotch.
Two ‘Ball-Shaped Microphones Are Placed Before Obama Suggesting Male Genitals.
Behind Obama Are White & Black Phallic-Suggesting Props.

THE JEWISH-OCCUPIED PRESS WITH ITS PHOTO-OPS OF BARACK OBAMA has been utilizing “subliminal” messages to bring viewers into abject submission to the new Zionist puppet President.

Having grown up in Judaism, and being entirely familiar with the manipulative Jewish advertising techniques employed by Madison Avenue, I have a keen eye for underlying messages embedded in photos and photo-op presentations. 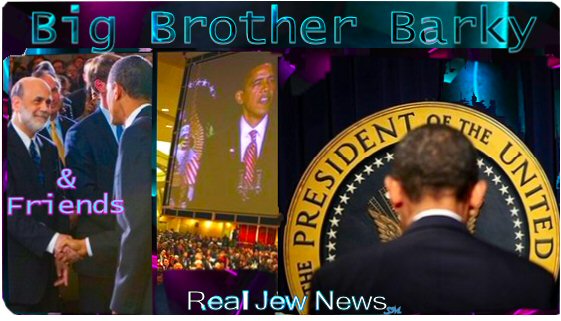 It must first be understood that Obama is a pure puppet and creation of Jewish Wall Street Bankers and the Military/Industrial Complex which the Jewish bankers fund. Thus the Jews who own the press and mass media work hand-in-hand with their synagogue buddies on Wall Street to bring Americans and the world into a euphoric response to the person and IMAGE of Barack Obama, history’s biggest political fraud, con-man and sociopath.

A ‘religious’ experience connected with ’sexual’ desire, ‘patriotism,’ the ‘brotherhood of man’ and ‘hero worship,’ are all part of Jewish-run Madison Avenue’s deceptive, wicked brainwashing techniques.

The Jewish-occupied press, (ever study the names in story bylines?), is using these powerful human passions to manipulate the minds of billions of media-enslaved humans whom the Jews wish to control in advancing their agenda of world domination through their stringed marionette, Barack Obama. 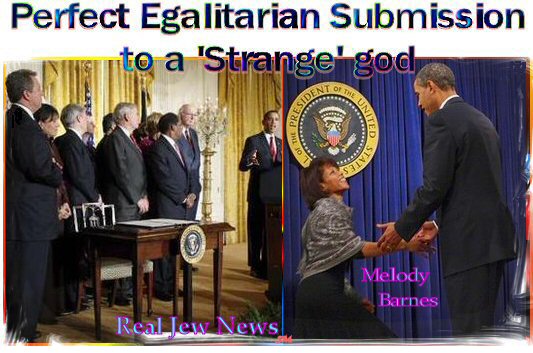 THE ABOVE TWO PHOTOS show a group of White House aides, all white males and one black male, in abject submission to the Kenyan-born Obama. To her pitiful shame, Melody Barnes, (photo on right), who is the director of the White House Domestic Policy Council, was forced by Jewish-employed cameramen, to present herself below Barky Obama in a compromising position.

Like a ‘god’ who bestows favours on his subjects, in this staged photo, Obama offers a gratuitous hand to his slave girl, Melody Barnes. Lifting Barnes out of her lowliness, the sexual overtones are obvious, suggesting a ‘black slave girl’ willing to submit to her master. 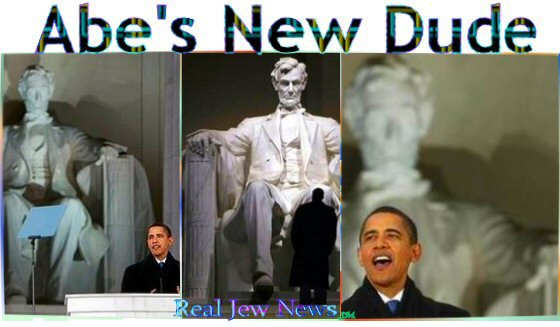 HERO WORSHIP PLAYS A BIG PART in photo-ops promoting Obama as America’s new champion. The 19th Century president, an established icon in America’s collective consciousness, is the great statesman and revered President Abraham Lincoln. The Jewish-controlled media would have us equate the Kenyan-born Obama, (a third-rate politician with no more than an average intelligence), with the likes of an Abraham Lincoln.

Please notice in the above center photo that Obama stands before Lincoln as if receiving a ‘charge’ from the great man. The bordering photos suggest that Barky is under the approving ’shadow’ of Lincoln.

Can anyone with at least a junior-college education really believe that Obama, a political rock star who is no more than a dude, can stand in Abraham Lincoln’s shoes & follow in his legacy?

OBAMA’S ZIONIST HANDLERS WOULD HAVE US WORSHIP their empty-vessel, front-man president. Placing their puppet in front of the Presidential Seal so as to form a halo around his Kenyan head, the subliminal message to the billions of viewers is that Obama is worthy of adoration and worship. This same technique was tried with G.W. Bush.

The center photo emphasizes Barky’s worship-deserving personage, as a mixed choir of whites & blacks sing a hymn of adulation before the false god, Barack Hussein Obama.

The right photo is none other than Obama’s half-brother, George Hussein Obama, (notice the “Change” t-shirt), also born in Kenya to the same father, (by his 4th wife), who lives in a shack on the outskirts of the Kenyan capital Nairobi. (See Pic Of Shack Here.)

George Hussein Obama was recently arrested for possession of marijuana. To worship Obama is to worship those who are of the same essence as him, as Christian theology posits the issue. We must then all ask ourselves, “Should we worship a man whose own brother lives in a Kenyan shack, now in a Kenyan jail, a common criminal whose desire for ‘change’ is to just get out of jail?” 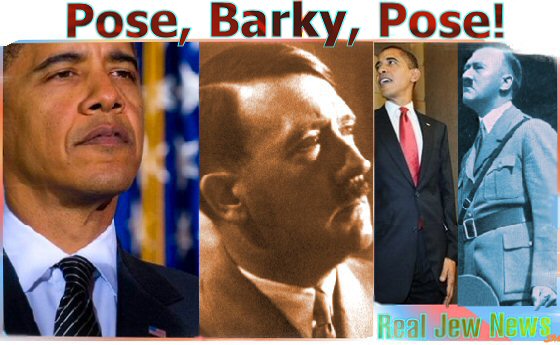 “THE BIGGER THE LIE, THE MORE PEOPLE WILL BELIEVE IT,” is a statement attributed to Adolph Hitler. (The Exact Quote Is Here).

In actuality, Hitler was referring to a quote by the legendary German philosopher, Arthur Schopenhauer, who stated that Jews were, “The Great Masters Of Lies.”

In his book, Mein Kampf, at no point does Hitler advocate the technique of the ‘big lie,’ but rather, he criticizes the Jews for adopting the technique themselves. Lamentably, Jews, who are in total control of Western civilization’s academic world, have misrepresented and distorted much of what is palmed off as history. 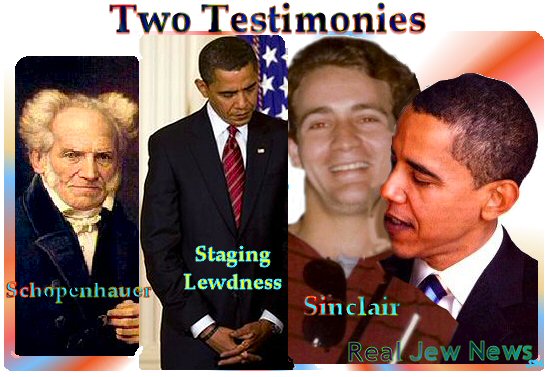 Now making history, (as the Jews present it through their current photo-ops and propaganda lies), is the political rock star, Barack Obama. In an obvious replication of poses made by Hitler and Mussolini in many of Obama’s photo-ops, Barky’s handlers would have us in fearsome awe of their sock puppet president.

But for those of us who are fully aware of Obama’s past, including his alleged homosexual and drug activities, (See Rense.com Archives Here), the Zionist agenda to distort, invent and corrupt ‘history’ and sequester proven facts becomes more than transparent.

The Zionist Jewish controllers know only too well that the media-dependent masses are essentially clay in their hands, and with each passing week, resistance becomes less and less…