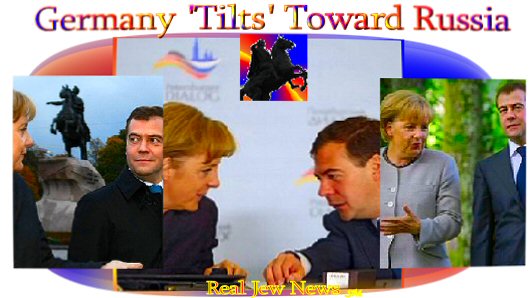 Commanding the largest economy in Europe, and with Frankfurt being the location of the EU central bank, Germany dictates the political direction of the European Union.

A highly significant meeting took place in St Petersburg on October 2 2008 dubbed as the “St Petersburg Dialogue” between German Chancellor Angela Merkel & Russian President Dimitry Medvedev. The meeting demonstrated Germany’s tilt toward Russia and away from the US. Just prior to the meeting, Merkel criticized US leadership:

“US leaders are responsible for allowing American financial instability to spread worldwide. US domination of world financial markets has now come to an end.” View Entire Story Here.

“The US is both responsible for the financial crisis and unable to control worldwide damage from it. No longer should one state dictate the rules.” View Entire Story Here.

Now comes the kick in America’s pants. During the press conference after the meeting, Merkel took pains to emphasize common ground between Germany & Russia, pointing out, that in concert with Russia, she “does not believe Ukraine and Georgia are ready to join NATO.”

This announcement is a loaded statement against NATO and America’s plans for geopolitical expansion. Since NATO operates on consensus, any member nation, especially a powerful one like Germany, can block candidates from membership. Merkel’s opposition undermines America’s geopolitical strength, which throughout wider Europe, is manifested through NATO.

A ‘SECURITY AGREEMENT’ BETWEEN EUROPE & RUSSIA

Apparently, and though Russia’s proposal remains secretive with hardly any media exposure, Germany, which is Europe’s most influential nation, is not only backing Russia’s efforts to undermine the premier Western security alliance of NATO, it is actively seeking to form a new strategic alliance with Moscow.

The World Changed on August 8 2008 when Russia proved its political strength by launching a defensive military campaign in Georgia and proving the West’s weakness, when it did not come to Georgia’s aid.

Moscow’s actions forced many countries to reassess their positions by either solidifying their ties to Russia — like Armenia and Belarus — or turning to Washington to guarantee its security — like Poland.

Germany and Russia have close economic ties - especially owing to the current project of the Nord Stream gas pipeline. Co-operation between Germany & Russia makes geopolitical sense for Merkel, but brings other European nations to the brink of making a critical decision: ’tilt towards Russia or ally with the US?’

Germany IS tilting towards Russia. And now with the bankruptcy of America along with its failures in Iraq in Afghanistan, (both militarily and morally), Europe may be lost to America forever…