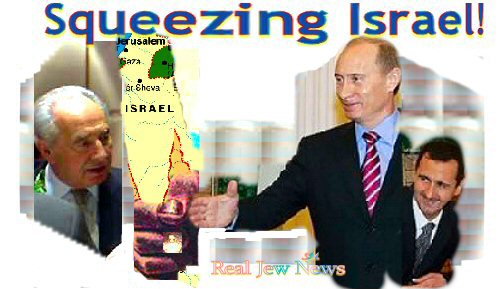 Unique Source: The Zionist West Has Met Its Match @ Rense.com Here
WHEN ISRAELI PRIME MINISTER Ehud Olmert was in Moscow on October 7 2008, he pleaded with Russia not to sell advanced weapons to Iran & Syria.

Putin was not there. It was Dimitry Medvedev that Olmert met with — and Olmert came up empty.

Olmert was concerned that sales of a S-300 anti-aircraft missile system by Russia to Iran would threaten Israel’s air superiority over Iran and Syria. And that if Iran received these missiles, it would be able to protect its nuclear sites, making an Israeli aerial strike ineffective. Ignoring Olmert’s plea, Russia intends on making the sale.

It is obvious to Israel’s leadership that Moscow’s bolstering of Syria’s & Tehran’s power to confront international pressures against them - is Moscow’s way of tilting the balance of power in the Middle East away from Washington.

Jerusalem’s fears of a Russian “retribution” began last August of 2008 when Russia accused Israel of selling arms to Georgia in the August 2008 Georgian attack on Russia’s client state, S.Ossetia.

Olmert’s visit to Moscow was not the first time that an Israeli Prime Minister was rebuffed by Russia. Ariel Sharon failed to convince Putin not to sell anti aircraft missiles to Syria when the two met in Israel in April of 2005. Putin was in Israel to recover Russian church properties seized by Israel.

Putin’s rebuke to Sharon carried with it a sarcastic sting:

“With the missiles in place it will make it difficult for you to fly over the residence of the Syrian president. For Israel to come within range of the missiles, you would have to attack Damascus. Do you really want to do that?” View Entire Story Here & Here.

IN A MAJOR THREAT to the Washington power bloc in the Middle East, a vessel from Russia’s Black Sea fleet had begun restoring facilities at Syria’s Mediterranean port of Tartus on September 10 2008.

The naval chiefs of both countries met in Moscow on September 12 2008 & discussed “further strengthening mutual efforts between the two states’ fleets.” The port of Tartus where the two fleets will unite, is directly above the disputed Israeli territory of the Golan Heights, seized by Israel during the “Yom Kippur War” in 1973.

But Israel’s complacency regarding the return of the Golan Heights to Syria was shaken when on August 23 2008, a powerful Russian naval contingent which included 4 nuclear missile submarines, docked in Syria’s port of Tartus.

On the day before the fleet’s arrival, Syria concluded a weapons deal with Moscow which prompted Israel to warn America, saying, “the weapons sales will destabilize the balance of power in the Middle East.”

Igor Belyaev, Russia’s charge d’affaires in Damascus, recently told reporters that Russia would increase its presence in the Mediterranean and that “Russian vessels will be visiting Syria more frequently.”

The implications of an increased Russian “presence” in the Mediterranean are obvious both to Israel and its failing “Pax Americana” power-broker, the now bankrupt, USA.