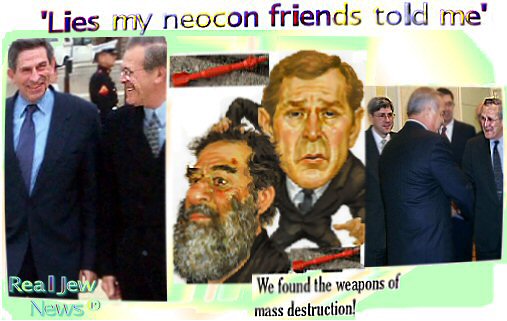 Source: List Of Bush Administration Lies @ Rense.com Here
GEORGE BUSH’S NEOCON FRIENDS sold him a pack of lies. And Bush mouthed their lies making it a matter of public record.

The neocon lies gave Bush the impetus to invade Iraq in March 2003. The Zionist neocons had long been planning an Iraqi invasion to help their client - the State of Israel. Now it appears that Bush’s angle in the Iraqi invasion was all about oil.

The Zionist neocons who urged Bush to invade Iraq were members of the Project For The New American Century (PNAC). This group was led by the Zionist Jew William Kristol. 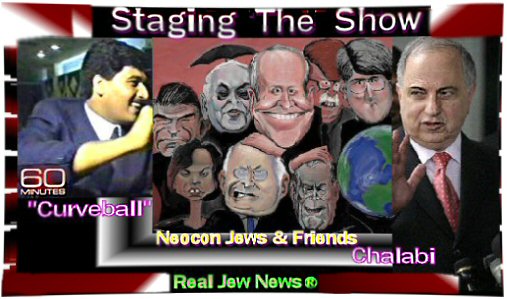 The Zionist neocon group PNAC set up as their ‘lead witness’ the Iraqi exile and former deputy prime minister of Iraq, Ahmed Chalabi.

In the run up to the 2003 Iraqi invasion, the neocons had Chalabi trot out an ‘Iraqi defector’ to whom the neocons gave the code-name “Curveball.” He was later exposed as an alcoholic & conman. “Curveball” told Americans about Saddam Hussein’s so-called “Weapons Of Mass Destruction” now proven to have been non-existent.

Bush finally was forced to admit the Zionist lie of the WMD. And the UN stated that the evidence supporting Iraq’s biological weapons were forged documents.

“Neocon darling” Chalabi also arranged interviews with “Saddam’s Mistress,” Parisoula Lampsos, who peddled lies about meetings between Hussein and Osama Bin Laden. These “meetings” provided more lies for the neocons to feed Bush who was itching to attack Iraq.

In March of 2008 it came to light that Senator John McCain was one of the first patrons of Chalabi’s grand-sounding International Committee for a Free Iraq.

And the recent discovery that Chalabi arranged meetings with the Iraqi oil minister for American oilmen like Bush fundraiser Albert Huddleston serves to prove that Bush was conspiring with US oil barons. For in 2006 Bush began touting the line: “We are in Iraq to keep the oil fields away from terrorists.”

For More See: “Iraq: A War For The Jews? Interviews!” Click Here


And: “The War On Terror Is A Jewish Hoax” Click Here