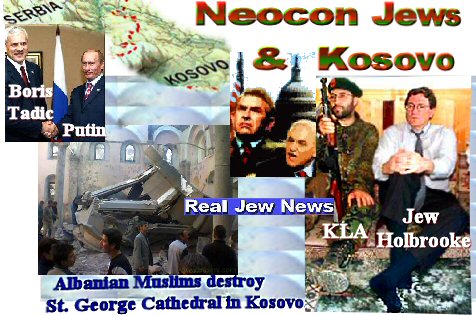 Or Send Your Contribution To:
Brother Nathanael Kapner; PO Box 547; Priest River ID 83856
E-mail: bronathanael@yahoo.com
THE JEWISH NEOCONS and the Jewish-controlled press are at it again. The Jewish propaganda machine has revved up its motors to promote an “ethnic-Albanian” “independent” Kosovo.

— “Since the UN has failed to reach an agreement, the US will opt to accept a unilateral declaration of independence by the Kosovo Albanians. Bush should make one last effort with Putin. His efforts must be backed by additional troop deployments in the region. It is not too late to prevent violence, but it will take American-led action and time is running out.” —
See: Neocon Jew Holbrooke Calls For War In Kosovo

Holbrooke, like many Jews who seek influence in this our Gentile world, changed his name from “Moos” to the WASP name of “Holbrooke.” Holbrooke’s paternal grandfather was a wealthy Jew from Germany by the name of “Samuel Moos.”

Jews change their names so that they would appear to the Gentiles as one of their own. In other words, you simply cannot trust these scheming Jews who enter into the political realm to advance their Zionist agenda.

Now that Russia’s President Vladimir Putin has made it clear that he will support Serbia’s efforts to maintain Kosovo as their legitimate province, the neocon Jew Holbrooke is beginning to get a bit unsettled. In an interview with a Jewish consulting editor for The Council Of Foreign Relations, (a Jewish funded elitist group), Holbrooke said:

— “The lack of Russian cooperation may lead to a “huge diplomatic train wreck’ when Kosovo declares its independence. Moscow has been no help at all, encouraging Serbia’s stubbornness and declining to help work out an arrangement to allow Kosovo a peaceful transition to the independence it has been promised by the international community.” —

What “Mr. Moos,” that is, the Jew “Mr. Holbrooke,” is not telling us, is that he wishes to turn over the Serbian province of Kosovo to the Muslims!

THE REAL ISSUE IS “MUSLIM VS CHRISTIAN”

THE JEWISH CONTROLLED PRESS would have us believe that the issues surrounding Kosovo independence is a matter of ethnic and nationalist considerations. The Jewish Press continually harps about “ethnic Albanians” and “democracy for the majority.” But nowhere will we read in their biased headlines: “Muslims Burn Down 400 Orthodox Christian Shrines In Kosovo.” Now that’s a Holocaust that Mr. Moos doesn’t want to discuss!
See: Kosovo Crucified

Russian President Vladimir Putin understands that the issues revolve around Muslims who simply cannot live with any other religion except their own. For on his own turf, President Putin is dealing not with Russia Vs Chechnya but rather with Muslims Vs Orthodox Christians.

In a May 17 2007 public address during worship at Moscow’s Cathedral Of Christ The Saviour, the Orthodox Christian President Vladimir Putin said, “Russia has always seen Orthodoxy as its spiritual foundation.”

Indeed, we see a world leader in Putin who understands the role of historic Christianity as a rudder for steering a national ship in the high seas of political policy both at home and abroad.
See: Putin Worships In Church
And: Putin On Kosovo Independence

NEOCON JEWS ARE BRINGING us to the brink of World War III. For piece by piece, the Muslims whom the Jewish Neocons promote are trying to take over the Balkans, the Philippines, (where they recently murdered the Roman Catholic Archbishop), England, Holland, and Denmark.

Israel’s Prime Minister Ehud Olmert recently voiced his fears that “the accelerated birth rate of Muslims in Israel will soon see a Muslim-takeover unless two separate states are established.” The bottom line in all of this is that a similar thread appears wherever the Muslims multiply: Christians Not Welcome! 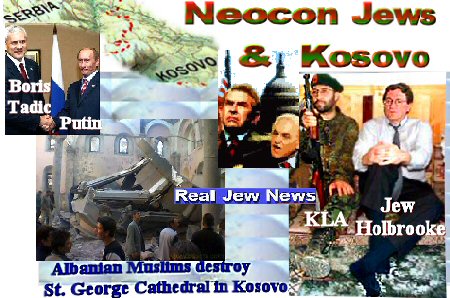 WHAT CAN BE DONE ABOUT THE WAR-MONGERING JEWISH NEOCONS?

JEWS LIKE HOLBROOKE, Richard Perle, and Paul Wolfowitz, who cry for American troops in agitated regions must be expelled from politics and kept in their Think Tanks with the lid on. Have we not all had enough of their Jewish “consultings?”

The agenda of these Jewish neocons has no room for American interests but rather that which will promote Zionist world-wide hegemony. Turkey’s relation with Israel plays a major part in this. For Turkey seeks control of the Balkans—the Mossad and Turkey’s Jewish-controlled military of Donmeh Jews work hand in glove throughout the region to establish Turkish political prominence.

We must in the next administration insist that Jews play no part in America’s foreign policy. We have a chance with the Libertarian candidate Ron Paul who already has declared his opposition to the Jewish world bankers, that is, the Federal Reserve Bank.

Only with Jews out of politics does the world have a chance to see the re-emergence of a Christian society and a Christian world view informing American and European foreign and domestic policy.

rather than being guided by a foreign entity, namely the Jews, who seek to destroy Christian civilization. We might have the chance of seeing, (as we with St Constantine the Great, St Alexander Nevsky, and St Theodosius The Great), real saints reappear amongst us once again!