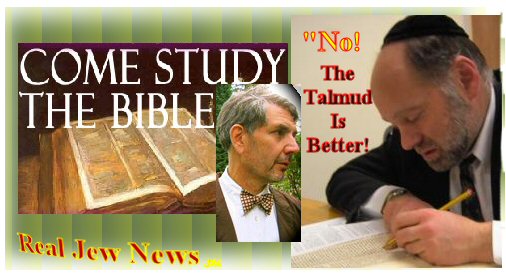 Place Your Order For: Judaism Discovered @ Revisionist History Here
“JUDAISM ONLY PAYS LIP SERVICE TO THE BIBLE,” writes Michael A Hoffman in Chapter 5 of his masterwork, Judaism Discovered. Hoffman continues:

“The Bible is not a factor in the formation of rabbinic law except as a front for what are man-made enactments and figments of rabbinic imagination.” Judaism Discovered, Chapter 5.

Hoffman then provides proof from a Talmudic discussion that the Bible takes a back seat to the Talmud:

“About the different fields of Torah study, our sages taught that they who occupy themselves with studying the Bible alone is not as good a way of study as they could have found.

This is because the other fields of study are superior to it. It may be said about those who occupy themselves with studying Talmud, that there is no greater way of studying than this.” (Gemara portion of the Talmud).

Hoffman then points out that not only do the rabbis claim a superior status of the Talmud over the Bible, but go even further, that they, the rabbis, are superior to God!

He again gives proof from the Talmud for this. He shows that the Talmud portrays God as conceding His inferior status to the rabbis and is bound by their decisions:

“God sits and occupies Himself with the section of the Red Heifer and He cites a Halakha [Jewish Law] in the name of Rabbi Eliezer. He does this despite the astonishment of Moses, who cries, ‘Sovereign of the universe. Thou dost hold in Thy power the creatures of heaven and earth. Yet Thou dost cite a Halakha in the name of a human being!’” (Pesiqta de-R Kahana). 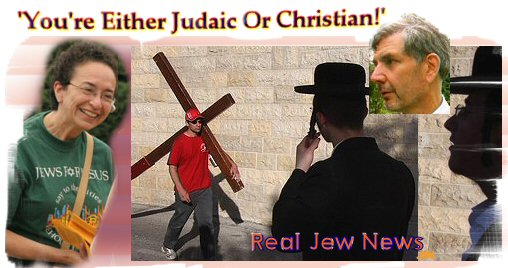 THE WIERD CULT OF ‘JUDEO-CHRISTIANITY’

“THE CLONING OF HUMAN & ANIMAL GENES is of the same piece with the contrivance of a ‘Judeo-Christian’ tradition,” Michael Hoffman writes in Chapter 9 of Judaism Discovered.

“Judaism & Christianity,” Hoffman points out, “are contradictory bodies of belief and must not be conjoined in an alchemical mixture that we have witnessed these last few decades in the cauldron of modernistic Christianity.

Hoffman then takes ‘modern’ Christians to task for furthering the myth of a ‘Judeo-Christian’ tradition:

“The Church Fathers knew of no ‘Judeo-Christian’ tradition since Judaism as we know it today did not exist before Christ.

These corrupt teachings were transmitted orally by the Pharisees. Christ condemned these teachings when calling them the ‘traditions of the elders.’”

I Grew Up As A Jew & Rabbinic Judaism Left Me Cold.
That’s Why I Finally Joined The Christian Church
& Became Part Of The Brotherhood Of Man!