McCain Panders To The Israel Lobby 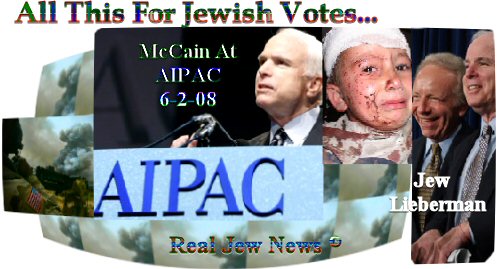 McCAIN PANDERS
TO THE JEWISH LOBBY


The most powerful Jewish Lobby is The American Israel Public Affairs Committee known as AIPAC.

Here Is An Excerpt Of John McCain’s Speech To AIPAC On June 2 2008:

When President Truman recognized the State of Israel he resolved that Israel would always have a friend in the United States of America.

Recently I was in Jerusalem with Senator Lieberman and we went to the Holocaust memorial, Yad Vashem. Today when we join in saying “never again” it is not a wish against Israel’s enemies, but a promise that the United States and Israel will honor against any foe.

Iran’s nuclear weapons poses a danger to Israel which we cannot allow. I was pleased to join Senator Lieberman in backing an amendment calling for the designation of the Revolutionary Guard as a terrorist organization responsible for killing American troops in Iraq.

Another matter of importance to the security of both America and Israel is Iraq. Our troops in Iraq have made hard-won progress. Al Qaeda terrorists are on the run and our troops are going to make sure they never come back.

America’s progress in Iraq is the result of a new strategy that Senator Obama opposes. He says he intends to withdraw troops from Iraq. We must not let this happen.

In a world full of dangers, Israel and the United States are the most natural of allies. And that alliance is forever.” — All Here & Video Of Speech Here. 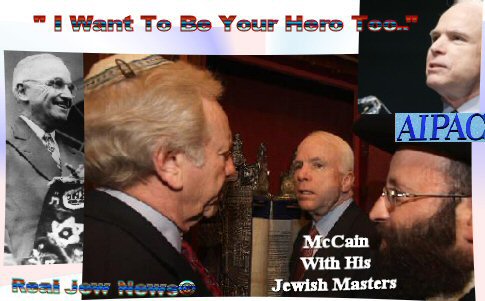 McCAIN’S PROMISES TO THE JEWS
Let’s Read Between The Lines Of McCain’s Speech:

1) “I am proud to be in the company of Senator Joe Lieberman.”

Between The Lines: “I promise to do whatever Lieberman tells me to do.”

2) “Truman said that Israel would always have a friend in the US of America.”

Between The Lines: “You Jews look upon Truman as a hero. I want to be your hero too!”

3) “I went to the Holocaust memorial.”

Between The Lines: “I will never say a word about Israel’s inhumanity to the Palestinians.”

Between The Lines: “I’m going to declare war on those Iranians!”

Between The Lines: “I promise that even more Gentile Americans will die in Iraq!”

How Then Can We Break The Power Of The Israel Lobby?

I Recommend That Americans Wake Up
To The Jewish Threat To Our Nation!

And: “McCain Bought By Jews Via The Rothschilds!” Click Here