US State Department Is Run By Jews! 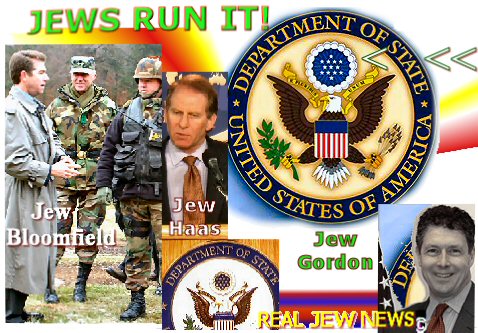 JEWS HAVE INSINUATED themselves into every sphere of American life. Ever since the Jew Henry Kissinger became Secretary of State in 1973, Jews have dominated the US State Department:

2. “Lincoln” Bloomfield: Current Under Secretary of State for Political Military Affairs, 2001-Present. (Notice the Wasp first name of this Jew!)

5. Richard Haas: Under Secretary of State for Policy Planning, 2001-2003. Current President of the Council on Foreign Relations.

6. Bonnie Cohen: Current Under Secretary of State for Management, 1997-Present. 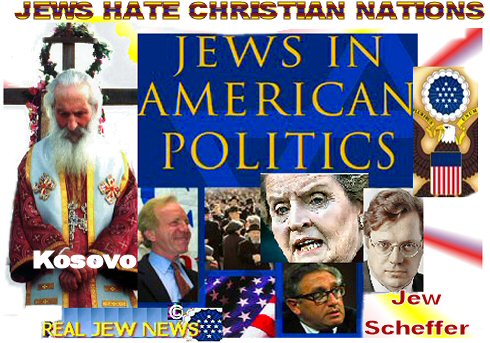 JEWS AT US STATE DEPARTMENT
BEHIND MUSLIM TAKEOVER OF CHRISTIAN KOSOVO!

3 MONTHS AFTER TAKING OFFICE as US Secretary of State in 1997, the Jew Madeleine “Korbel” Albright created a new post: Ambassador At Large For War Crimes Issues. She appointed the Jew David Scheffer who wrote the book, Self-Determination In the New World Order.

The Anti-Christian Jew David Scheffer immediately set out to punish Serbian President Milosevic by advocating military action against the Orthodox Christian nation of Serbia for so-called “crimes against humanity” in Kosovo.

Here is an excerpt from Scheffer’s book outlining US foreign policy against opponents to his “New World Order:”

— “Military intervention may be used for responding to international hot spots. It needs to be considered to what end the US should become involved in a conflict between an established state and a secessionist movement.

The US should seek to build a consensus within international organizations for its position. At the same time it should not sacrifice its own judgment if such a consensus fails to materialize.” — Self-Determination In The New World Order, David Scheffer,
Published by the Council on Foreign Relations.

Can we not see this policy implemented this very day with regard to Kosovo Muslims declaring “independence” with full US support in spite of Serbia’s & Russia’s opposition?

HOW CAN WE STOP
THE JEWISH POLITICAL INFLUENCE IN AMERICA?

1) Hide in a cave and never read the news again.

2) Climb Mt Everest & say you did it because no Jews were ever there.

3) Tell all your friends, Letters to Editors, Internet Forums, and neighbors, that Anti-Christ Jews running the US State Department have handed a Christian region over to the Muslims!