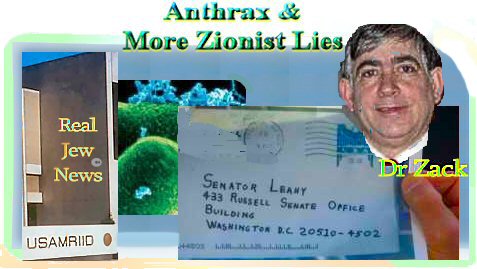 FINDING THE “CULPRIT” of the Anthrax attacks has been the special business of a few pseudo “bio sleuths” of the Jewish community. But for those of us who love the truth a good place to start is the US Bio Weapons Lab at Fort Detrick MD where the Ames strain of Anthrax can be traced to.

The man most likely responsible for procuring Anthrax for “terror attacks” is the Jew, Dr Philip Zack. Up until December of 1991, Dr Phillip Zack worked at the US Bio Weapons Lab in Fort Detrick MD where Anthrax is stored.

Although Zack left Fort Detrick in 1991 because of accusations of harrasing a Muslim colleague by the name of Dr Ayaad Assaad, he returned frequently to “visit friends.” After reports of missing biological specimens—including anthrax—surveillance camera tapes recorded Dr Phillip Zack entering the lab late on the night of January 23 1992 according to The Hartford Courant Report.

Zack was let in that night by Marian Rippy, a lab pathologist and close friend of Zack’s. Rippy now says she has no memory of the evening though she did “remember” that Zack occasionally visited and that other friends let him in.

The Zionist controlled Press ignored Dr Phillip Zack’s documented unauthorized visits. Did Gentile journalists fear being labeled as “Anti Semites” for casting suspicions on a Jewish scientist? No, that’s not it at all. It’s because Zionist Jews, (they own all of American media), protect their own, that’s why. 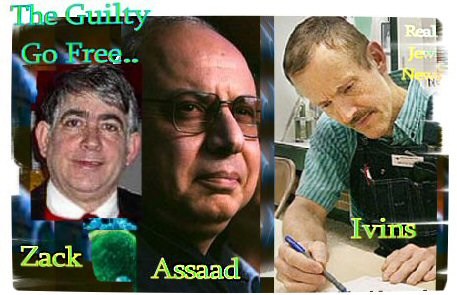 ON JULY 29 2008, Dr Bruce E Ivins, a highly respected microbiologist at Fort Detrick, and father of two, died of an alleged suicide. Many questions surround both Dr Bruce E Ivins, (who was awarded the Defense Department’s highest civilian award in 2003), and the entire investigation as well. No suicide note was found and Ivin’s co-workers have nothing but good things to say about him. And - the investigation documents are now conveniently sealed.

— “For six years, Dr Ivins fully cooperated with the FBI in every way that was asked of him. The relentless pressure of accusation and innuendo takes its toll in different ways on different people as has been seen in this investigation. We assert Ivin’s innocence and would have established that at trial.” — Here.

Soon after the 9/11 attack, an anonymous letter was sent to Quantico Marine Base accusing Dr Ayaad Assaad, Zack’s victim in 1991, of plotting terrorism. This letter was received before the Anthrax letters were even reported.

The timing of the letter makes its author a serious suspect in the Anthrax attacks. This is because the sender displayed considerable knowledge of Dr Assaad, his work, his personal life, and a remarkable premonition of the upcoming Anthrax attacks. Who would have possessed this knowledge? Even an amateur detective would say, “Dr Phillip Zack.”

After interviewing Assaad on October 2 2001, the FBI, ignoring Assaad’s plea, strangely decided the letter was just a hoax. While the Zionist controlled Press did note that an anonymous letter had accused Dr Assaad of bioterrorism, none followed up on it after Assaad’s innocence was established.

And - Dr Phillip Zack’s name never surfaced again as one of the Anthrax suspects. Why?