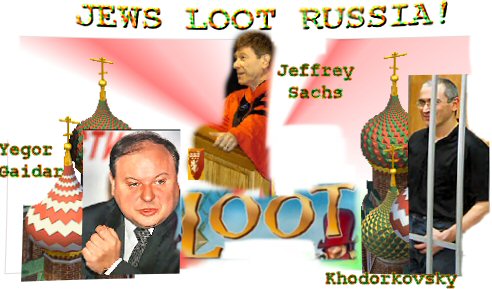 RUSSIAN COMMUNISM FELL in 1991. The Jews could not wait to sink their greedy claws into the new scenario in Russia.

Jeffrey Sachs, who at that time was a Professor of Economics at Harvard University, was one of these Jews.

But their Jewish agenda was not to help Russia, but to rape Russia once again, just as their Jewish counterparts did with their international socialist program when sovietizing Russia in the early 20th Century.

But now, Jeffrey Sachs and his Jewish buddies were going to do it with their international capitalist system. Privatization was both theirs and Russia’s new watchword.

Sachs teamed up with his Harvard colleague, the Jew David Lipton, and Yegor Gaidar, a Russian Jew, who became Yeltsin’s first prime minister.

Sachs, Lipton, and Gaidar initiated a plan which they called economic shock therapy to eliminate subsidies and price controls that had kept the Russian economy stable for decades. What was the result of this shock therapy? Hyperinflation.

Just as planned, the hyperinflation wiped out the capital reserves of Russian factories, banks, utilities, and all other institutions. This eliminated any chance for real Russian competition in the bidding for Russian assets which was about to begin.

The Russian institutions and manufacturing facilities were now eager to turn their assets into cash, playing into the hands of Sachs, Lipton, and Gaidar Because the value of rubles was now at an all time low, they wanted Western currency.

Under the cover of international banking loans, (Jewish bankers of course), Sachs and friends began to buy out Russian companies at next-to-nothing prices. 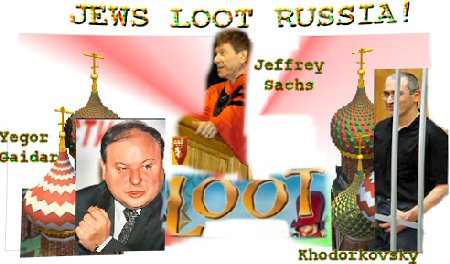 THE JEWISH OLIGARCHS OF RUSSIA

, as they began to be called, did not completely get away with their looting.

Here is a list of some of these Jews who looted Russia and their resultant status:

1. Jeffrey Sachs: After being exposed for making a “killing” off of the privatization of Russia, he was allowed by Harvard to quietly leave and take a professorship at the Jewish-run Columbia University in NY.

2. Yegor Gaidar: In 1993 he came under attack by the Russian people for his alliance with Sachs. Fearing a Putin investigation, he fled Russia and presently lives in Ireland.

3. Boris Berzovsky: After grabbing many media institutions and a major television station during the looting in the early 1990’s, Putin finally caught up with him and initiated an investigation. He then fled to England.

4. Vladimir Gusinksy. He took control of many Russian banks during the looting. He was the leader of the Russian Jewish Congress. Now in exile in Greece, the Russian Courts are trying to have him extradited for his shady business dealings.

5. Mikhail Khodorkovsky: He bought majority stakes in Yukos oil company for practically nothing during the looting. Putin caught up with him and put him in jail in 2005.

ALL OF THESE JEWS BELONG IN JAIL, and for that matter, all of the Jews who are “looting” our once Christian culture with their Anti-Christian activities.

I grew up as a Jew and I wish to inform all of my readers that most Jews care only about themselves and nothing for the Gentile societies in which they reside or can make a profit from.

What is the answer to this Jewish plague that is rotting our society?The only answer is for Jews to repent of their solidarity with Anti-Christian Judaism and become Christians.

Then they can use their energies and influence for Jesus Christ rather than for Satan. I did it! Why can’t they?
–
Brother Nathanael Kapner…A Former Jew. Now An Orthodox Christian!

For Further Reading SEE: The Harvard Boys Do Russia