A Jew Destroys A Righteous Goy 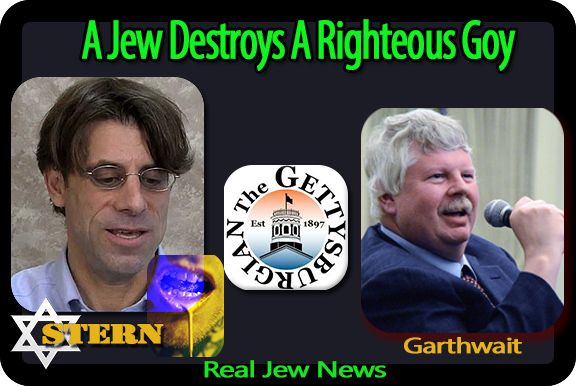 A RIGHTEOUS GENTILE ALUMNUS and trustee and donor of Gettysburg College was forced into making a humiliating apology by a vile and nasty Jewish professor.


Bob Garthwait, founder of the Garthwait Leadership Center on the campus, emerged as a target for Stephen Stern, Professor of (the school needs this sh#t?) Judaic Studies.

One of Stern’s Jewish students, Hannah Labovitz, was “outraged” to discover in a 1980 yearbook a photo of the trustee at a fraternity event wearing a swastika armband. 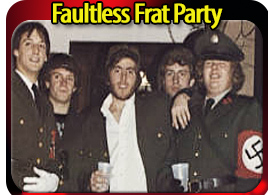 Engaged in ‘frat life’ innocence, Garthwait was at a theme party based on Hogan’s Heroes, (a sitcom set in a German prisoner of war camp during World War 2), and was dressed as a guard at a POW camp.

“It wasn’t just him,” Labovitz snitched to Stern, “it was the school that allowed this to appear in the yearbook and there were zero complaints when the yearbook was allowed to be published.”

Oh my! Labovitz wants to know WHO ALLOWED IT?

Must have been some goys who built the college that the Jew descended upon in order to upend it.

And like a typical, that is, hateful Jew, Labovitz applauded Garthwait’s resignation.

It’s a Jewish affair! Whatever the Gentile builds the Jew tears down. 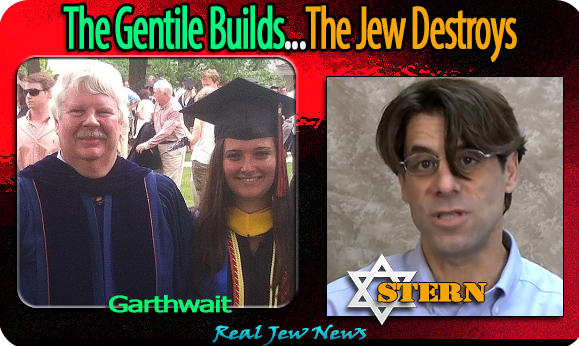 TAKING THE HATEFUL Jew ball and running with it, Professor Stephen Stern then threw it in Garthwait’s face.

The nasty Jew, (typically mounting upon moral high ground while bereft of any provable virtue of his own), demanded the righteous trustee’s resignation and insisted that his monetary donations be returned due to their ‘nazi’ colorizations.

Caving to Stern’s demand, Garthwait made a humiliating public confession according to the ‘current approved formula:’

“My sincere hope is that our students will learn from my poor judgment 38 years ago. I extend my sincere apologies to the Gettysburg community and humbly ask for forgiveness.”

Never, EVER, let a Jew make you quake and quiver in the face of his pernicious drift. “A righteous man falling down before the wicked is as a troubled fountain and a tainted spring,” said King Solomon.

HOW IN THE HELL does a vile Jew—who never earned an honest day’s wages with his own hands—arrange the defaming of the righteous Gentile Bob Garthwait?

Garthwait, a 1982 alumnus and CEO of Cly-Del Manufacturing in Waterbury, who funded a leadership center on campus and in 1997 received a young alumnus award from the college?

How does this Jew, Stephen Stern, besmirch Garthwait’s family name which appears on the college’s Benefactors Wall which recognizes individuals and organizations that have donated $1 million or more?

Because we’re living in a Jew-ruined world and that’s why Jewmerica is doomed.