Israel Calls The Shots In Texas 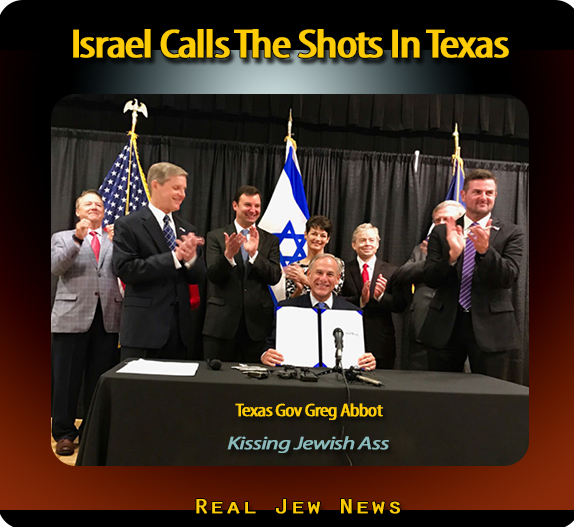 IF YOU WANT TO WORK for the State of Texas you have to kiss ass. Whose? The ass of the Jew.


That’s what a speech pathologist refused to do. Bravo!

The heroine, Austrian-born Bahia Amawi, is an exemplary naturalized US citizen of 30 years, a highly educated professional, and wife and mother of four children. She is not just some towel-headed “Moooslim” as the John Hagee crowd would view her.

Working with speech-impaired elementary students in Austin Texas for nine years, the school district denied her a renewed contract when she in good conscience balked at signing a ‘Loyalty Oath’ (not to America) but to the criminal Jewish State of Israel.

Amawi simply declined to sign the employment certificate vowing that she “does not” and “will not” engage in a boycott of Israel or “otherwise take any action that is intended to inflict economic harm” on that foreign nation.

The Anti-BDS Oath was included in Amawi’s contract papers due to a Texas law enacted in 2017 and signed by GOP Governor Greg Abbot at (not the State Capitol building) the Austin JEWish Community Center! View Signing Here, Here & Here. (Israel flag in Video usurps American flag, and NO Texas flag.)

When Abbott signed the bill he proclaimed to his Jewish enablers: “Any anti-Israel policy is an anti-Texas policy.”

How can being against the policies of a foreign nation be against Texas’ policies?

Can a foreign country interfere with its domestic protocols?

Oh it can!…when JEWISH money buys governors and hacks, AND trashes free speech, political positions, and all that the Constitution protects. 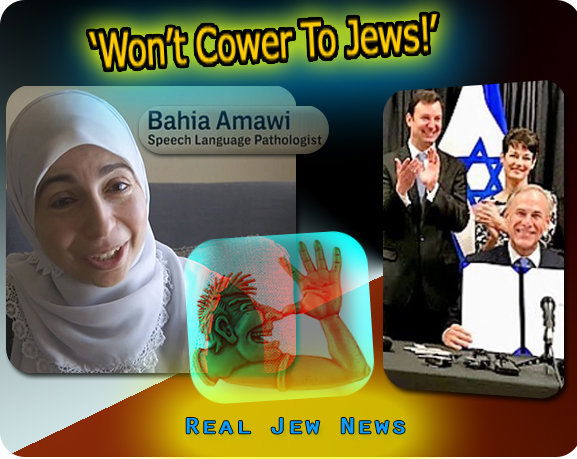 THE JEW’S AGENDA IS SIMPLY another name for treason.

For when it comes to upholding the policies of Israel versus Constitutional rights and liberties, the Jew shows where his loyalties lie: dedication to a foreign state rather than where the Jew resides.

For what’s at stake in these Jew-arse-kissing Loyalty To Israel Oaths is their violation of the First Amendment right to political free speech, freely-decided policy views, and freely-determined consumer choices.

In a ruling when Jews had less of a grip on our country the Supreme Court found that the First Amendment cannot enforce a unanimity of opinion on any topic.

The ruling stated that “no official can prescribe what shall be orthodox in politics, nationalism, or other matters of opinion, or force citizens to confess by word or act their faith therein.”

That’s exactly what Bahia Amawi was forced to do and she did not cower but threw back in the Jew’s teeth her Constitutionally-protected conscience. Bravo!

IF THE JEW INSISTS that the Constitution’s Commerce Clause must be applied in its broadest scope here too one can throw his treason back in his face.

Simply tell the treasonous Jew that although states and the federal government can regulate commerce, that is, what can be sold, they can’t tell you what you can or cannot buy.

Do you wish NOT to buy products made by illegal occupants, (miserable and violent Jewish settlers), then that’s your God-given right.

America needs to serve God and not Jews.

How To Buy An Election Here