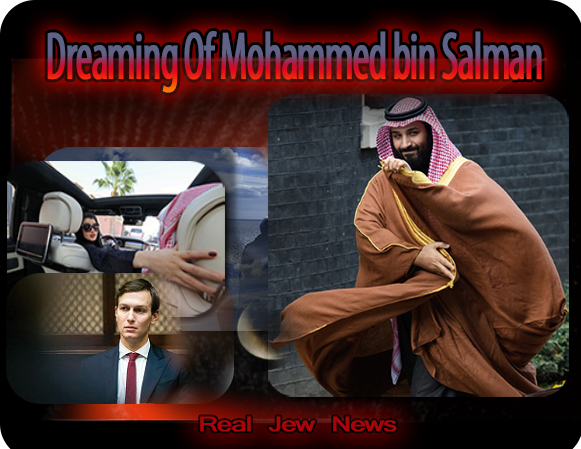 LIKE A NOISE IN THE DARK that shocks the psyche out of a deep sleep so my dream last night sent shivers up and down my spine.


I dreamt I was having lox and bagels at 666 Fifth Avenue in Manhattan with Jared Kushner, Trump’s ambassador to the Jewish vote, who is also Mohammed bin Salman’s personal peacemaking envoy to the West banking arm of the West Wing.

Suddenly, a black Mercedes pulls up to the entrance and Kushner pushes me into the back seat while he sits in front next to the driver, a woman wearing a Muslim headdress.

Turning to me Kushner exclaimed, “Isn’t it grand, and a large step for democracy, that the crown prince has freed up Muslim women by allowing them to drive!”

“Can they speak out against the regime?” asked I.

“Oh yes,” responded Kushner, “they are very vocal with an intense hatred toward the Assad regime, and the Ayatollah regime, and really, every regime in the whole wide world that are the enemies of democracy, and foes of the only democracy in the universe, Israel.”

“You bet your matzah balls, it is!” stressed Kushner, “we’re, I mean, Israel’s the only country where settlers can vote in places where Jewish voters never could vote before.”

Before I could say, “FILCHED,” I found myself in some palatial place right smack in the middle of the desert.

Wondering where I was I kept asking myself if I was dreaming when a man in a long robe with a wide smile came up to me. 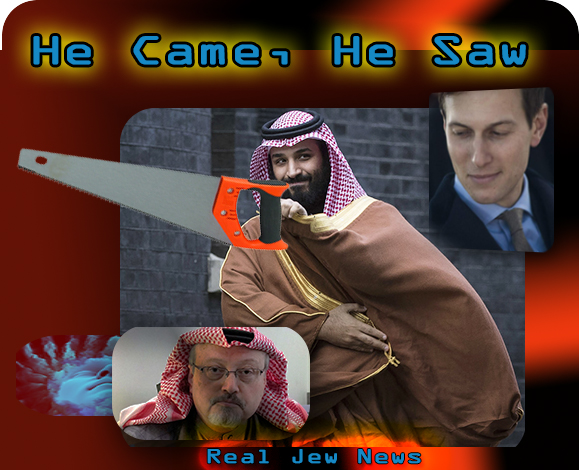 WITH A SCYTHE-LIKE SAW in his right hand, bin Salman gave me a big, huge hug, with the saw, teeth-side in, lying across my shoulder bones.

I realized that I was not being too politically correct, and with Jared scowling at me I blurted out, “just joking, doesn’t anybody here have a sense of humor?”

“We do,” said bin Salman, “but jokes about cold blooded murder, of which I could’ve known about but may not have known about, have no place on the world’s stage, as your own senator, Felix Mendelssohn, said the other day.”

I thought to myself you’re in a real fix now. How ya gonna to tell the crown prince that he’s confusing Felix Mendelssohn with Senator Menendez?

Shall I tell his Royalness that the senator’s first name is “Bob” and not “Felix?” If I do I might offend him. So I kept my mouth shut.

Ruminating, I thought, hey, Menendez’s first name is Robert, why am I calling the scoundrel “Bob” like he’s a regular kind of nice guy, like everyone calls Pompeo “Mike” like he’s your friendly neighbor who hates Iran, hates Russia, hates China, hates Syria, hates Somalia, hates Yemen, hates everyone—except Israel—like all Americans who have no clue where Yemen is and are supposed to hate everyone that “Mike” hates, and love the Jewi…” 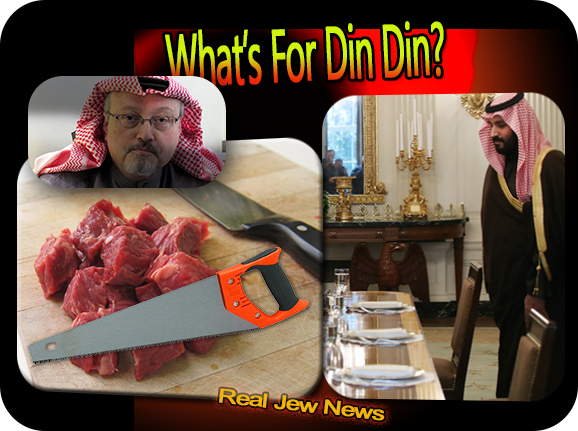 Nodding my head no and feeling nauseous I coughed this up:

“Your Crownishness, do excuse my boldness here at the Western Wing of Israeli expansionism but the senator used the phrase “the world’s stage” to concur with Gina Haspel’s debriefing on the, ahem, bone-slicing murder of Jamal Khashoggi.”

Avoiding Kushner’s harsh scowl, I continued while the Saudis placed a porcelain vase filled with Chop Suey (Saudi style) next to me on a table stand with a Jewish Star embedded in the vase, fearing I might knock it over if I got too heated.

“Look, whatever your Royalness might have against Gina Haspel she convinced Menendez and a whole slew of senators like Lindsey Graham and other Congressional slaying-enablers of a thousand, ten thousand, probably a hundred thousand, Palestinians.”

“I mean,” said I, “David slew Goliath, and that for a just cause, but Jews are slaying ten thousands of your brothers for an unjust cause, your Arab brothers in Palestine slain every day. Don’t you care? I mean…”

And with arms upraised to bring my point home I hit the vase and oh no! it came crashing to the ground shattering into ten thousand pieces!

I woke up!…turned on the musical “The King And I” and grabbed the Washington Post.

Nothing about children starving in Yemen, not a line about unarmed Palestinian teens shot by the Israelis, but Khashoggi this, Khashoggi that, wrecking ball this, madman that.

“Hmm, why nothing about all the torture victims in Gina’s Cat’s Eye Prison in Thailand?

The Flip Side Of Trump’s Embassy Move Here

Saudis In The Synagogue Here