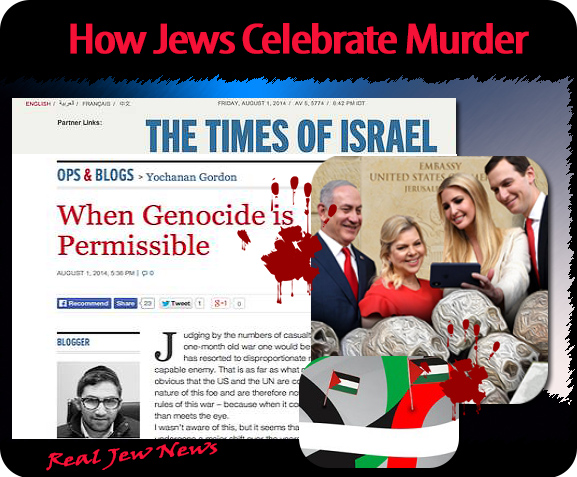 ‘WHEN GENOCIDE IS PERMISSIBLE’ read the Headline on Sheldon Adelson’s The Times Of Israel (Israel Hayom) calling for the murder of Palestinians.

“Hamas idealizes death as much as Israel celebrates life,” wrote the bloodthirsty Jew.

“What other way is there to deal with an enemy of this nature other than to obliterate them completely,” the genocidal Jew concluded.

The notion that Jews “celebrate life” is laughable.

Abortion in Israel is rife and assaults on Palestinians by Israelis sanctioned by World Jewry (don’t be fooled by Gallup polls where Jews publicly posture as being against Israeli violence) is evidence of Judaism being a religion of death.

What’s galling about the latest genocidal rout against the Palestinians’ peaceful “Great March Home” protests in concert with the opening of Trump’s Embassy in Jerusalem is how the Jew-owned Main Stream Media either ignored or justified it.

Any outrage over 2700 wounded and 60 unarmed dead Palestinians at the Gaza 1950 Armistice line (not a border, Israel has no defined borders) deliberately executed by the Jews in just one day was non-existent, but the Jew-pleasing rant by Nikki Haley, “Israel used restraint,” was plastered everywhere.

Most, if not all of the thousands of dead, maimed and wounded unarmed Palestinians, including paramedics, press journalists, old men, women and children shot by Israeli snipers in the past six weeks, were hundreds, even thousands of feet away from the ‘Gaza prison fence,’ and posed no threat to anyone.

There is NO “border” marking off the Gaza Strip from the rogue state of Israel, there’s an armed prison fence along the armistice line, and an ambiguous militarized free-fire zone extending deep into Gaza’s Palestinian farmlands, making it still Israeli-occupied territory. 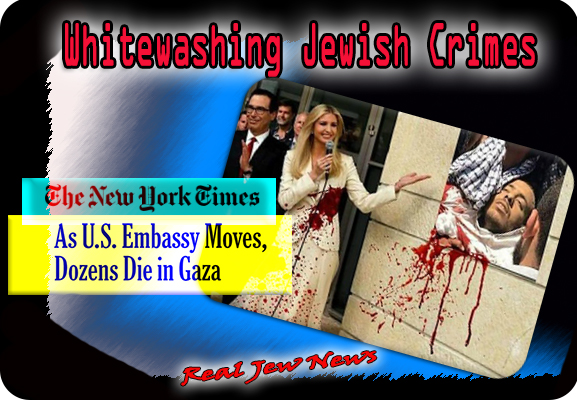 JEWISH ENABLED HEADLINES—detached from the Gaza reality—whitewashed the Israeli massacre.

Headlines like “Dozens Die In Gaza” (were Gazans sick? were they old?) and “Clashes Erupt During US Embassy Opening” (did both sides commit “clashes?”…when only the Israeli side did) fool the reader into thinking that Israel, though troubled, is still a peace-loving place.

The Jew-owned media also ignores all the murderous rallies of the Jews in Israel that call for “Death To The Arabs!”

Israel’s long-running practice of brutally killing Palestinians at every pretext, a people with no standing army of their own but an irregular people’s resistance with inferior, home-made weapons and under Israel’s high-tech military boot…

…is in fact, a message to the Arab world — “Don’t mess or this will happen to you.”

And of course, there’s always the Samson Option given Jewry’s stash of nukes in Israel that’s under NO international oversight. (Hitler had it right: “All the Jews want in Palestine is a central organization for their world swindle with no intention of living there.”)

The question is, “Why do Jews get away with murder?” 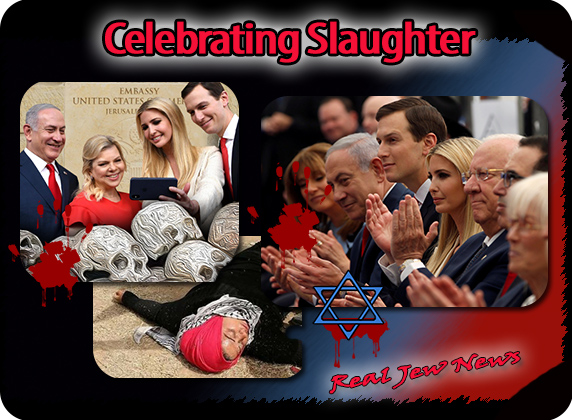 JEWS ARE EXEMPT not only from criticism of their pernicious influence-peddling in the US but of any censure of their committing of murder against innocent human beings.

All one has to do is follow the money to know why.

Jews wield the bucks in America; own the press; control the information (Google is owned by The Mossad since its inception); and cuts the checks of the military brass via the Federal Reserve Bank which the Jews own; and bribe and blackmail the hacks on DC.

Some positive things can come of it — US hypocrisy for camouflaging the criminal deeds of Jews is being exposed for all the world to see and to react effectively against it.

Jews are getting nervous.

Intense censorship is coming. But the backlash will be worse than ever.

Hitler couldn’t be heard. But today more and more are on to the Jews.

Everyone will say, “Jews deserve it”…no ‘innocent victims’ next time around.

Jews won’t be celebrating, but all the world will.

See: Why Israel Gets Away With Murder Here

Rise Of The Three Israels Here

Who Is The True Israel? Here