Saudis In The Synagogue 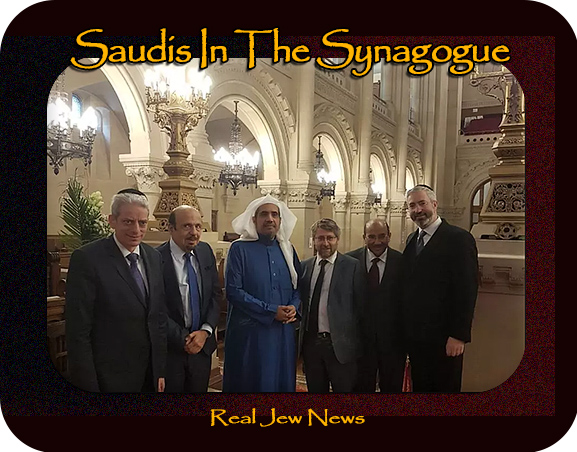 “WHAT A SURPRISE!” exclaimed Rabbi Moshe Sebbag of the Grand Synagogue in Paris last Monday.

Referring to the visit to the synagogue by Riyadh’s Ambassador to France and the Secretary General of the Muslim World League, the rabbi and France’s chief rabbi, Haim Korsia, welcomed the senior Saudi officials with open Yidishee arms.

Yet the visit surely came as ‘no surprise’ to Mohammed bin Salman, Saudi’s deadly clown prince, who would nix such a shindig, (and ‘visit’ trouble upon the officials), if it is wasn’t his good pleasure to see the frippery pan out.

It all comes on the heels of Netanyahu stating that “Israel covertly cooperates with some Arab nations and will expand.”

For with bin Salman wining and dining NYT Jewish journalist, Thomas Friedman, (ultra-neocon Jew who never pushed a war he didn’t like), who penned praises bordering on crass fawning of the clown prince, the expansion has hit the opinion pages of Jewmerica’s favorite organ of propaganda. 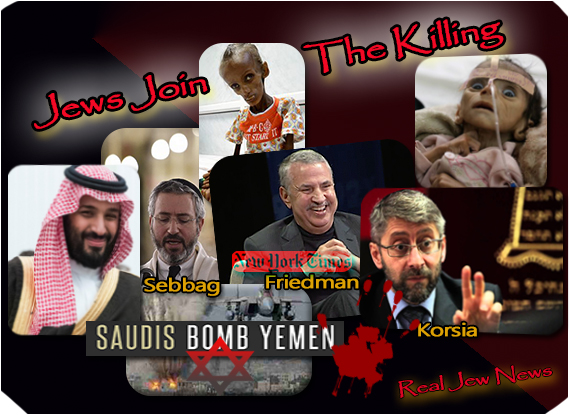 And ignoring the starving, cholera-stricken Yemenite children inflicted upon them by Saudi Arabia’s attacks on that hapless country (with secret US–UK collaboration), Friedman would have us believe that a ‘great reformation’ is underway in the ’sands’ desert palace.

Let’s call a spade a shovel:

PURE BS, UNADULTERATED TASTELESS JEWISH PROPAGANDA pushing an ISRAEL-US-SAUDI coalition that’s touted to save the world from an Iranian nuclear attack on Europe and America with Iran’s non-existent nukes.

But for those who grasp the art of Jewish spin, whenever a “threat” to the world, or to America, or to Europe is trumpeted by the Jew-owned Main Stream Media, instantly it’s discerned to be rather a “threat” to Israel, and let the entire world go to hell to protect the chaos-creating JEW state.

So far the world ain’t buying it. 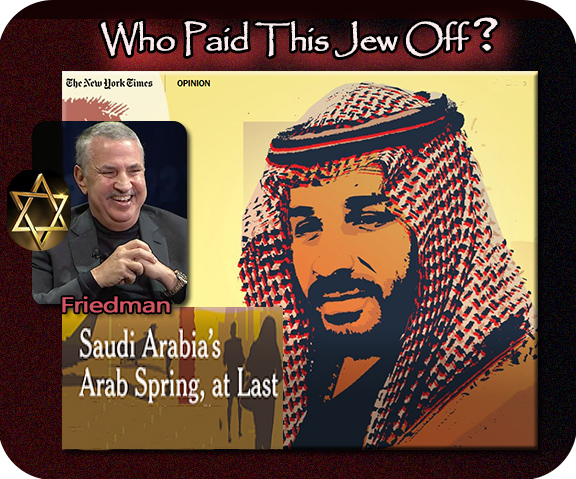 PRESENTED AS AN “INTERFAITH MEETING,” the visit was apparently orchestrated between Tel Aviv and Riyadh in preparation of open diplomatic relations getting the world (both Muslim, Jewish, and White Gentile) accustomed to such.

Any fifth grader could easily spot high level back door diplomacy at the express invitation of Rabbis Korsia and Sebbag, who of course, got the go-ahead from Tel Aviv and its lobbying agent in Paris, Conseil Représentatif des Institutions Juives de France (CRIF.)

For the International Jewish Lobby, endowed with BILLIONS of dollars to bend the Goyim to its will, has one abiding interest: What’s good for the Jews and spin it so the Goys think it’s good for them.

BUT WHAT’S GOOD FOR THE GOOSE is bad for the gander since all kinds of Jew-inspired immorality is dispersed and spreads like a plague.

The Palestinians, whose lands are continually filched by the Jews, are about to be totally sold out by the Saudi-US-Israel coalition.

And Yemenite children, whose food shipped to Yemen’s port is being blocked by the same coalition, are easy fodder in order to ’stop’ that ‘evil’ nation called Iran.

Why is it evil? It’s only ‘evil’ is that it resists, condemns, and fights the Zionist quest to take over the Middle East.

Keeping the anti-Christ Jewish state at bay is a gift to us all.

The Kushner Plan That Plopped Here

And: How The Media Fakes The News/A JEWtoob Ban! CLICK Here!