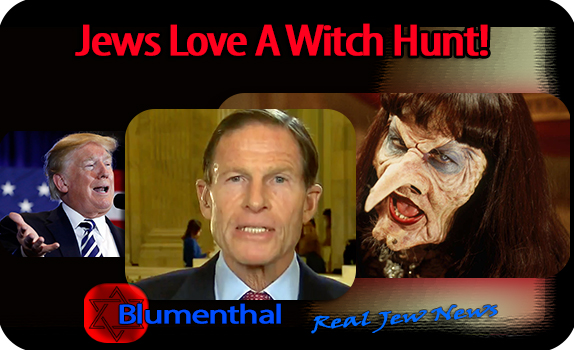 The Yid was yelping to his fellow hymie, Wolf Blitzberg of Jew-owned CNN regarding a supposed obstruction of justice ploy by President Trump to allegedly subvert Rosenstein’s and Mueller’s ‘witch hunt.’

Sheeny Schumer chimed in calling the president, “an un-indicted co-conspirator of a federal crime,” and demanding the appointment of Kavanaugh to the highest bench be “postponed” due to Trump’s pending “legal jeopardy.”

This is more Jew vomit that incessantly fouls “our democracy.”

Are we so stupid to fall for Jewish tricks?

It really amounts to, “We Jews hereby pronounce the Executive Branch to be null and void because our gal Hillary didn’t get in.”

IT’S A POLITICAL WITCH HUNT in which the Jews are exploiting “Rosenstein & Mueller” and their so-called ‘foreign influence investigation’— for the congressional yids’ own crooked inquisition.

For with bulbous-eyed Adam Schiff spewing political spit to his fellow Jew, Jacob Tapper, with, “let’s not blow it” …we won’t impeach until “all the evidence comes in…” what we get is spiders weaving their webs to advance the tribe’s entrapment.

The fix is in, and the “fixer” isn’t Cohen, it’s Jews who run the on-going undertaking to take down the once Christian nation of America. 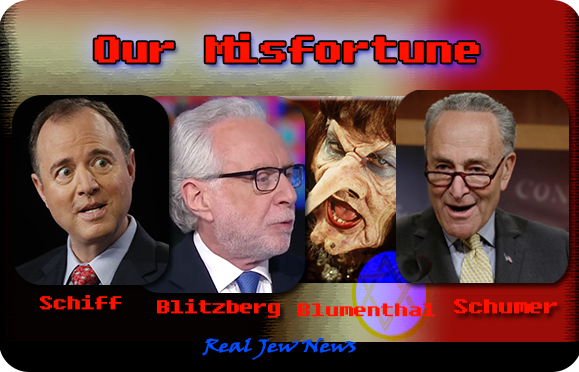 THE BEEF AGAINST TRUMP is yet another Jewish gripe that occurs whenever the political process doesn’t match Jewry’s malignant whims.

For if their homo-loving gal Hillary had won there would be no investigation of Trump.

His ‘deals’ would’ve been brushed off as ‘financial misdemeanors’ of which many Jewish real-estate moguls commit as routine affairs and much worse.

There would be no Jewish yelps of “Save our democracy!” if Hillary won for she would’ve suited ‘Jewish democracy’ well, since the Jews, who own it all, must have it their way:

DOES ANYONE really believe that Jews love democracy?

They invented it so it could be awarded to the highest bidder, themselves, so fat cat Jews can buy every hack, every mediocrity, every sleazeball yid, and every goy looking for a corrupted career on Capitol Hill.

And of course Schiff and Schumer want to pursue the impeachment of President Trump.

It’s the Jewish way: Create social fissures and out of the fragmentation only ONE ‘fragment’ rises, JEWS.

Who said, “Jews are our misfortune?” A shrewd and farsighted man.

Who Owns The Trump-Attacking Media? Here